The Mandalay Ruby is a gemstone of Burmese origin, that gets its name from Mandalay, a city on the Irrawaddy River, in central Burma. Mandalay is the second largest city in Burma (Myanmar) after the capital city of Rangoon (Yangon), and situated almost in the center of the country. Mandalay is almost a hub of the country’s interior communications, where the four main types of communication, roads, rail, air and river transport are centered. It was the last capital of the Myanmar kingdom, which fell to the British troops in November 1885. The famous ruby mines of Mogok are situated about 100 km (60 miles) north of Mandalay. The 48.019-carat Mandalay Ruby, undoubtedly would have been discovered in the Mogok mines, and whoever who eventually came to own this unique gemstone, named it the Mandalay Ruby, to perpetuate the name of this historic city. 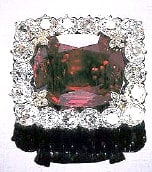 One of the largest and finest rubies in the world

The Mandalay Ruby is a 48.019-carat, cushion-cut ruby, almost flawless with good transparency, and an intense red color almost approaching the so called pigeon’s blood color. The quality of the stone was so perfect that Sotheby’s auction house placed a pre-sale estimate of $15 million on the stone, when it came up for auction in October 1988.

Some of the qualities of fine rubies

Color is the most important factor that determines the value of a ruby. The best color for rubies is an intense rich crimson color, commonly known as pigeon’s blood color. Rubies that are too dark or too light in color have lesser value. Intense red colors with purple or brown overtones are also valuable. Then follows the pinkish-red or reddish pink colors, of the Sri Lankan rubies. The gemstones that are too light in color are known as pink sapphires.

Clarity of the stone is also an important factor, but it is important to note that there are no rubies in the world that are completely flawless and without inclusions. In fact the presence of inclusions is a distinguishing factor that separates natural rubies from synthetic imitations, that can reassure the buyer about the authenticity of the stone. Thus the best way of selecting “good clarity” stones, is to look for “eye clean” stones, that does not show inclusions visible to the naked eye. Uniformly distributed fine silk can enhance the value of some rubies. For a star ruby, the optimum quantity of silk that can cause the best star effect must be present. If the silk is too much the red color could be masked and the stone might appear grayish, which is not desirable.

The commonest cut employed for rubies are the cushion-cut and the oval-cut. Other less common cuts that are used are the round, emerald and heat-shaped cuts. Cabochon cuts are used for star rubies, and rubies that are not clean enough for faceting.

Rubies and sapphires belong to the same group of minerals called corundum, which is crystalline aluminum oxide. The red color of rubies is caused by some chromium atoms displacing aluminum atoms in the crystal lattice of aluminum oxide. The presence of iron atoms in association with chromium makes the ruby darker and imparts a brownish or purplish overtone, as in Thai rubies.

Physical and optical properties of rubies

Rubies have a hardness of 9 on the mohs scale. The excellent hardness and toughness of rubies impart durability and make them less prone to wear and tear. As such rubies are ideal for setting in long lasting jewelry either alone or in combination with diamonds.

The specific gravity of rubies vary between 3.99 and 4.02. Rubies have double refractive indices, which is intermediate, the values being 1.761 and 1.769. Birefringence, which is the difference between the two refractive indices is 0.008, which is quite low. The dispersion of ruby is also low, equal to 0.018. In comparison diamonds have a dispersion of 0.044. This is one reason why diamonds have more fire than rubies.

The source of the ruby

The name Mogok is derived from the Burmese word “Mong Kut” which means the “winding valley,” that describes the physical features of this area in northern Burma, situated around 4000 feet (1230 meters) above sea-level, in the upper Shan Plateau. The huge mountains surrounding this area constitute a section of the eastern Himalayan orogenic system, that was formed when the Indian sub-continental tectonic plate collided with the Eurasian tectonic plate about 40 million to 60 million years ago. The energy released during this process helped transform corundum-containing igneous rocks to metamorphic rocks by contact metamorphism. The metamorphic rocks were then subjected to long periods of erosion on a geological time scale, running to millions of years, and the corundum containing gravels were released, washed down the hills and deposited in the valleys below as placer deposits, where rubies, sapphires and other gemstones are mined today.

Rubies appear to have been first discovered accidentally in Mogok in the 15th century, by outlaws and bandits who were forcefully settled in the area, after being banished from the kingdom of Mandalay. The ex-convicts sent the rubies as gifts to the king, who pardoned them. However, instead of returning to their former villages, they decided to stay put in Mogok and exploit the newly discovered mines. The king in the meantime promulgated a decree that all large rubies found in the mines automatically became state property, with the threat of capital punishment hanging over the heads of would-be law breakers. The harshness of the decree sent all large rubies underground, and breaking up of larger crystals to the legally retainable sizes. Due to stringent government controls most of the rubies mined were smuggled across the Indian border and eventually reached the nearest commercial city of Calcutta (Kolkata) in Bengal, from where it ended up in the palaces of the prosperous Indian Maharajahs, or sold to buyers from the west.

The Mogok ruby mines had remained the world’s premier source of rubies for over 600 years, but the world’s most ancient source of rubies was Sri Lanka. After continuous exploitation of the Mogok ruby mines for over 600 years, supplies have almost been exhausted, and several new mines such as the Mong Hsu mines, 60 miles south of Mogok, have been discovered. The Mong Hsu rubies are darker in color and look like garnets, however after heat treatment they assume a bright red color. Today, most of the Mong Hsu rubies are smuggled across the Thai border to Chantaburi, where it is heat treated and sent to the Bangkok international gem market for disposal.

Mandalay Ruby comes up for auction at Sotheby’s, New York, in 1988

The Mandalay Ruby came up for auction on October 18th, 1988, at Sotheby’s auction house in New York, on behalf of its anonymous owner. The 48.019-carat, cushion-cut ruby was the largest ever ruby, presented at an auction, and had a pre-sale estimate of $ 15 million placed on it. This was a record price ever set on a single jewel, but unfortunately there were no bidders at the auction. John D. Block, head of jewelry sales at Sotheby’s attributed the lack of bidders for the priceless gem, to the high pre-sale estimate placed on the stone.

During an advertising campaign leading to the auctions of October, 1988, Sotheby’s tried to give a historical value to the unique gemstone, by trying to identify it with some historical rubies such as the J. N. Forster Rubies, and the unnamed oblong-shaped ruby sold at London in 1896.

The J. N. Forster Rubies were two large Burma rubies weighing 37-carats and 47-carats, that was brought to England in 1875. In fact the two stones were put up for sale in the London market on behalf of the Burmese royal family. J. N. Forster got the two stones re-cut to western standards, reducing the size of the rubies in the process to 32.31 carats and 39.56 carats. The smaller stone eventually sold for £10,000 and the larger stone for £20,000. The Mandalay Ruby however weighs 48.019 carats, which is much higher than the weights of the Forster Rubies. Thus attempts to identify the Mandalay ruby with the larger Forster Ruby cannot be sustained.

At a Christie’s auction in London on May 7, 1896, a 46.75-carat oblong-shaped ruby mounted in a brooch together with four brilliant-cut diamonds was sold for £8,000. Attempts by Sotheby’s to identify this ruby with the 48.019-carat Mandalay Ruby are also untenable, due to the weight differences.

The present whereabouts of the Mandalay Ruby are unknown.

3) Ruby and Sapphire notes -Website of the Department of Geological Sciences, University of Texas.