However, recently the National Gem & Jewelry Authority of Sri Lanka, had christened the world renowned 393-carat blue star sapphire as the “Star of Lanka” and the authority’s website carries an image of the gemstone followed by a short description. The recent naming of the stone had created an awkward situation as the name “Star of Lanka” has already been used by the authorities of the Royal Ontario Museum for another unique star sapphire of Sri Lankan origin weighing 193 carats. In the naming of famous gemstones including diamonds duplicity in naming is always avoided in order not to cause confusion among the general public and the students and researches of the history of famous gemstones. When situations like this arise in other fields of study according to conventions only the name that appeared first chronologically is given recognition and the other name or names are disregarded. This convention applies equally well in the field of gemology.

Possible use of the name “Star of Sri Lanka” ?

It is up to the National Gem & Jewelry Authority of Sri Lanka to decide on an alternative name for the 393-carat blue star sapphire, in the interests of all gemologists, students of gemology and the general public. The name “Star of Sri Lanka” has not been used to refer to any gemstone to date, and perhaps may serve as a suitable name. But, we feel that this name be left on reserve, in case good counsel prevails and the authorities of the American Museum of Natural History (AMNH) decide to rename the renowned 563-carat Sri Lankan stone, the “Star of India” as the “Star of Sri Lanka”, sometime in the future, thus redressing a long injustice caused to the country of origin of the gemstone. The late Sir Arthur C. Clarke, the internationally famous Space Scientist, Science Fiction Writer, and Futurologist, who adopted Sri Lanka as his motherland, expressed this desire when he wrote “and by some distressing impertinence, the splendid star sapphire which is one of the glories of the American Museum of Natural History (AMNH) gem collection, is called the Star of India, not as it should be the Star of Ceylon.

The name “Star of Ceylon” has already been used for another 101.01-carat star sapphire that belongs to a private collector in Seattle. Thus only the name “Star of Sri Lanka” remains for possible use in the future. 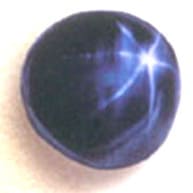 The unnamed gemstone owned by the NGJA of Sri Lanka, is a 393-carat cabochon-cut blue star sapphire with a high-dome and a distinct 6-rayed star. The color of the stone is an incredibly rich deep-blue color, that rivals the color of the best Kashmir blue sapphires, the internationally recognized standard for color in blue sapphires. The combination of color, cut, carat weight and distinctness of the star, makes this gemstone the finest blue star sapphire of its size in the world. In fact the stone was insured for £ 1 million ($ 1.8 million), when the stone was exhibited for the first time in London, in 1981 at the Commonwealth Institute. Richard Hughes in his book Ruby & Sapphire says that the 393-carat star sapphire owned by the National Gem & Jewelry Authority of Sri Lanka, is probably the finest large star sapphire in existence. In fact in terms of color, cut and distinctness of the star, the stone even surpasses the renowned 563.35-carat “Star of India” another Sri Lankan stone owned by the AMNH New York City.

What causes the blue color and asterism ?

Blue star sapphires are asteriated blue varieties of corundum. The mineral corundum is a crystalline form of aluminum oxide. Pure corundum is colorless, but if some aluminum atoms are displaced by atoms of transition elements such as chromium, titanium, iron, vanadium, nickel, cobalt etc. various colors are induced on the mineral. The cause of blue color in corundum is the presence of titanium and iron atoms in the crystal structure. The cause of asterism or star effect is the presence of sufficient quantities of rutile fibers in the crystal structure, that are arranged in bundles in a three-fold pattern. Each bundle reflects incoming light through the dome-shaped face of the stone, forming a luminous line. Thus three luminous lines are produced that intersect one another at the center if the stone has been correctly cut. The star effect is best seen only when the dome-shaped face of the stone is exposed to a direct source of natural or artificial light such as direct sunlight or light emanating from a torch or flash light. The star also appears to glide along the surface of the stone when the stone is rotated from side to side between the thumb and the fore finger. Rutile is also the cause of milkiness in the stone, commonly known as silk.

Cutting of a star sapphire

Cutting a star sapphire needs special skills and a lot of experience. The most serious challenge faced by the cutter of a star sapphire is to decide on the proper orientation of the stone that will bear the dome-shaped face of the stone, in order to bring out the maximum star effect. Only an experienced cutter will be able to do this. The slightest mistake may result in a failed star, a star displaced towards one side, or a star with some of the arms missing. Sri Lanka is a country that can boast of a gem-cutting and polishing industry as old as the mining industry in the country dating back to over 2,000 years. Using hand operated traditional gem-cutting machines and different forms of minerals as abrasives, and making use of the skills passed down faithfully from generation to generation the Sri Lankan cutters achieved a standard of perfection that astounds even the modern day gemologists. Sri Lanka is continuing with this tradition and has modernized its gem-cutting and polishing industry using state-of-the art equipment. The 393-carat unnamed blue star sapphire was cut and polished by the gem-cutting and polishing experts of Sri Lanka.

Possible source of the blue sapphire

The 393-carat blue star sapphire was acquired by the State Gem Corporation the predecessor of the present day National Gem & Jewelry Authority of Sri Lanka, after the Corporation was constituted in the early 1970s, following an Act of Parliament. Thus, the gemstone probably would have been acquired in the mid or late 1970s. Around this time the main source of blue sapphires in Sri Lanka, was the newly discovered mines in Rakwana, another town in the traditional gem-producing district of Sri Lanka, Ratnapura district in the Sabaragamuwa Province. Rakwana blue sapphires became internationally renowned as the look-alike of Kashmir blue sapphires, and in fact several gem-testing laboratories around the world issued reports certifying that the Rakwana stones were of Kashmiri origin. Thus it is quite possible that the 393-carat unnamed blue sapphire also originated in the Rakwana region of Sri Lanka, as the stone also has many features characteristic of Kashmir sapphires.

The 393-carat blue star sapphire owned by the State Gem Corporation of Sri Lanka was carried to London in the year 1981, where the gemstone was put on display at the Festival of Sri Lanka, at the Commonwealth Institute in Kensington. The gemstone was displayed inside a glass case which also contained a 4.5-foot king cobra that acted as a sentry for the $ 1.8 million gemstone. This represented the amount for which this extraordinary gemstone was insured. The novel way of providing security to an expensive gemstone was widely reported in Newspapers around the world, including the prestigious International Herald Tribune and The New York Times. The unusual exhibit attracted large crowds and became the most popular display at the event.

Shocking news of a robbery just next to the cobra sentry

The New York Times of September 9, 1981, reported the shocking theft of four blue sapphires worth more than $ 25,000, from a room in the Commonwealth Institute in Kensington, in which a poisonous king cobra was guarding another jewel worth $ 1.8 million. The theft was a daring day light robbery that took place in the institute during the Festival of Sri Lanka, held at the institute. While large crowds were gathered around a glass cabinet displaying the 393-carat blue star sapphire guarded by the cobra sentry, thieves went up to another cabinet in the same room and took the gemstones, according to a spokesman of the institute.

In September 1991, an international gem exhibition was hosted in Colombo, the capital of Sri Lanka. At this exhibition the world’s 4th largest blue star sapphire weighing 393 carats and another 103-carat star sapphire, both belonging to the State Gem Corporation, one of the organizers of the event, was put out on display in a glass case, again guarded by a king cobra sentry. The two gems were said to be worth around 45 million rupees, which was equivalent to $ 1.1 million. A spokesman for the Sri Lanka State Gem Corporation said, “We thought that this would be a better security system than anything else.” The idea of using cobra sentries and other poisonous creatures like scorpions to guard valuable items on display has been adopted even by some leading super markets in London and the United States.

Website of the National Gem and Jewelry Authority-Sri Lanka