“Alan Caplan Ruby” also known as the “Mogok Ruby” gets its name from Alan Caplan the famous geologist and mineralogist and also mineral and gemstone dealer who acquired the stone while on a trip to Burma in the 1960s or 1970s. The ruby remained in his collection until 1988, when it was disposed for a record breaking price at a Sotheby’s auction in New York. An alternative name used for the “Alan Caplan Ruby” is the “Mogok Ruby,” a name apparently derived from the source of this high quality ruby, the Mogok Stone Tract of Burma (Myanmar). 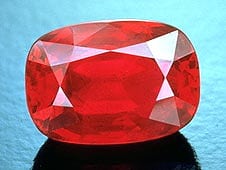 One of the finest rubies in the world

The “Alan Caplan Ruby” is a 15.97-carat, untreated, natural ruby with a perfect cushion-cut, and an “eye clean” clarity, having an intense red color approaching the benchmark pigeon’s blood color for rubies. The gemstone also has good translucency. The overall quality of the ruby is so perfect, that it achieved the highest ever per carat price for a ruby sold at an auction, in the year 1988, a record that it held until the year 2006.

The cause of the red color in rubies

The cause of the red color in rubies is chromium, which displaces some of the aluminum atoms in the crystal lattice of aluminum oxide, that constitutes the mineral corundum. Burma and Sri Lankan rubies contain only chromium as the color inducing agent, but the Thai rubies also contain iron in addition to chromium, which imparts a darker red color to the rubies with a brownish or purplish overtone.

Rubies crystallize in the trigonal (hexagonal) crystal system, and the crystal habit is short hexagonal prisms. Crystals of the hexagonal crystal system are strongly dichroic, and therefore when rubies are examined under the dichroscope, two colors appear, an intense purple-red color and a light orange-red color. Red garnet and red spinel that crystallize in the isometric crystal system are not dichroic. Therefore this property can be used to distinguish between true rubies and their look-alikes red garnet and red spinel.

History of the Alan Caplan Ruby

Source of the ruby

Alan Caplan purchased the Ruby in the 1960s or 1970s during one of his trips to Burma, and in all probability the ruby originated in the Mogok Stone Tract of Burma, the world’s premier source of rubies since the 15th century. Mogok lies about 400 miles (650 km) north of the capital city of Rangoon (Yangon) and about 60 miles (100 km) northeast of Mandalay, the second largest city in Burma. The town of Mogok situated in the Katha district of upper Burma, is located 1500 meters (4860 feet) above sea level, surrounded by hills rising to a height of 2300 to 2400 meters (7400 to 7700 feet). The area where the ruby mines are located is about 400 sq miles in extent, but the actual gem-bearing areas cover only about 70 sq miles.

The hills that surround the Mogok area are a part of the eastern Himalayan orogenic system, that was formed by the collision of the Indian sub-continental tectonic plate with the Eurasian tectonic plate, about 40 to 60 million years ago. The energy produced during this tectonic activity helped in the transformation of corundum containing igneous rocks to metamorphic rocks by contact metamorphism. The metamorphic rocks produced were mainly crystalline limestone (marble). Millions of years of weathering released the rubies from their limestone matrix, which were then carried down the hills and deposited in the valleys below, forming placer deposits, where the rubies are mined today.

According to legend rubies were first discovered in Mogok by bandits and outlaws in the 15th century, who were forcefully settled there after being banished from the kingdom of Mandalay. But, the discovery of pre-historic stone age and bronze age mining tools in the area, show that the mines would have been exploited thousands of years earlier. Continuous exploitation of the Mogok mines for over six hundred years, have almost exhausted the deposits of rubies and several new mines have been discovered recently. One such mine is the Mong Hsu mines discovered in 1992-93 and situated about 60 km southeast of Mogok. However, the rubies produced here are dull red in color and require heat treatment to transform them to a bright lively red color.

Alan Caplan, who claimed to be of Jewish origin, was born in New York or New Jersey on December 29, 1913. He was interested in the natural sciences since early childhood and developed an interest in minerals while at high school. After graduating from high school in 1933, he worked for a short period in the Denver Museum of Natural Science, and later began collecting fossils and minerals from the Colorado region, which he sold by placing small ads in mineral magazines. After following a three-year course in geology and mineralogy between 1934-37 at the University of Colorado, and a post-graduate course at the Colorado School of Mines up to 1938, Alan Caplan, embarked on a full time career as a collector and dealer of minerals. Later he decided to take a trip to Brazil on a mineral hunting expedition, which proved to be successful. More trips followed and before World War II he had already made 10 trips to Brazil, and had become one of the most successful mineral dealers in the country, supplying institutions like the Smithsonian, Harvard, and American Museum of Natural History.

After enlisting in the Army in 1943 during World War II, he served in Italy until the end of the war in 1945. After the war he resumed his lucrative mineral hunting trips to Brazil and visited Brazil at least 12 times. After the year 1958 his interests changed from minerals to gemstones both cut and rough. Caplan made several trips to Columbia to purchase emeralds. He also traveled to Burma, looking for rubies, and it was during one of these trips that he purchased Alan Caplan Ruby. He became one of the most successful and prominent gem dealers of New York. He is credited with having owned one of the largest and historic emeralds in the world, the “Mogul Emerald.” Alan Caplan died in the year 1998 at the age of 85 years.

After the purchase of the ruby in Burma, he got it cut and polished by the expert cutters working for his company, under his supervision and was successful in turning out a perfect cushion-cut ruby that eventually became the most expensive ruby in the world. In October 1988, the ruby was put up for auction by Sotheby’s of New York, and after a competitive bidding process, was finally purchased by Laurence Graff of the London-based Graff diamonds, for a sum of $ 3,630,000, which works out to $ 227,301 per carat. This was the highest amount ever paid per carat for a ruby in the world. Laurence Graff mounted the valuable ruby on an engagement ring, and later sold it to his favorite royal customer, the Sultan of Brunei, who gave it for the engagement of one of his wives. Laurence Graff incidentally, had been the main supplier of diamonds, gemstones, and jewelry to one of the richest men in the world, the Sultan of Bunei, to whom he partly owes his success.

New record for price per carat for ruby set on February 15, 2006

The record set for price per carat for a ruby on April 12, 2005, was again broken the following year on February 15, 2006, when an 8.62-carat ruby set in a Bulgari ring sold for $3,637,480, at a Christie’s auction held in St. Moritz. This works out to a price per carat value of $421,981, a new record per carat price for rubies. The Bulgari ring was also purchased by Laurence Graff, and possibly sold to the Sultan of Brunei, his favorite royal customer.