The St. Edward’s Sapphire gets its name from Edward the Confessor, the king of England from 1042 – 1066, in whose coronet or ring the fine blue, rose-cut gem was once mounted, and is presently set on the finial cross of the Imperial State Crown of Great Britain. Edward was well renowned for his piety and is credited with the building of the Westminster Abbey, which was consecrated on Holy Innocent’s day, on 28th December, 1065. Edward the Confessor was canonized by Pope Alexander III in 1161, 95 years after his death in 1066. Characteristics of the Gemstone

The Saint Edward’s Sapphire, which is presently set in the center of the cross-patee on top of the Imperial State Crown is a rose-cut blue sapphire of unknown weight, with an exceptional color and brilliance. It is the most ancient stone on the Imperial State Crown, with a history dating back perhaps to the 11th century A. D. when it is believed to have been set on the coronation ring of Edward the Confessor, who ascended the throne in 1042 A.D.

The present rose-cut shape of the St. Edward’s Sapphire is perhaps not the original shape of this ancient gemstone. It is believed that the stone was re-cut during the reign of King Charles II, after the restoration of the monarchy following the brief but tumultuous period of the republican commonwealth. The fact that the rose-cut was developed in Europe in the mid-16th century gives credence to this belief. Rose-cut gemstones are usually flat-bottomed, with the crown of the gem elevated in a faceted dome with triangular facets, and without a table. The standard rose-cut has a total of 24 facets. Rose-cut gemstones can be of different shapes, such as round, oval, pear-shape etc. However the St, Edward’s Sapphire seems to have an octagonal shape.

The St. Edward’s Sapphire being a blue sapphire belongs to the corundum group of minerals. Corundum is crystalline aluminum oxide in which color is produced by the displacement of some aluminum atoms in the crystal lattice, by atoms of various transition elements, such as chromium, vanadium, titanium, iron, nickel, cobalt etc. In the case of blue sapphires the color is caused by titanium and iron atoms. Corundum has a hardness of 9 on the Mohs scale, which is the next hardest substance after diamond. Due to its hardness and toughness sapphires are durable and do not scratch easily. Their polish can remain for a long time. Thus the fact that the St. Edward’s Sapphire had survived for the last 966 years is little cause for any bewilderment.

The origin of corundums date back from 500 million to 2 billion years, when they were first formed in the earth’s upper mantle 60 – 400 km deep inside the earth, under conditions of very high temperatures and pressures. With the rising magma they were brought to the surface of the earth, where the cooling of the magma produced igneous rocks with the corundum incorporated in it. The action of weathering agents on the igneous rocks, such as temperature, rainfall etc over millions of years, caused the separation of the corundum from the parent rocks, which were later washed down the hills and slopes and deposited in the low lying areas as alluvial deposits, from which corundum is mined in different parts of the world today. Some of the most ancient sources of corundum in the world are Afghanistan and Sri Lanka. Afghanistan had been famous for its rubies and spinels since ancient times. Sri Lanka had been famous for rubies and sapphires since very ancients times, dating back to the period of King Solomon in the 10th century B.C. Thus it is quite possible that the St. Edward’s Sapphire also originated from the ancient alluvial corundum deposits of the renowned gem producing district of Sri Lanka known as Ratnapura.

Coronation of King Edward the Confessor

According to tradition, the St. Edward’s Sapphire made its first appearance in the year 1042, when the sapphire mounted on a ring was used for the coronation of King Edward the Confessor, who was crowned in 1042 A.D. Edward was the son of King Ethelred II the Unready (978-1016) and Emma, the daughter of Richard II, the Duke of Normandy. After a period of exile in Normandy until 1041, when the Danes took control of England following the death of Ethelred in 1016, he returned to London during the reign of his half brother King Hardecanute, king of Denmark from 1028 to 1042 and of England from 1040 – 1042. After the death of Hardecanute in 1042, Edward ascended the throne of England. Edward the confessor was noted for his piety, and founded the Westminster Abbey, which was consecrated on Holy Innocent’s Day on 28th December, 1065.

There is an interesting legend associated with the St. Edward’s Sapphire. According to this legend the pious king Edward the Confessor had a great respect and admiration for St. John the Evangelist. He was also noted for his generosity towards the poor and the destitute, and during his official tours in his domain he would hand out large sums of money as charity to these unfortunate people. One morning on his way to the Westminster Abbey he was accosted by a beggar. The immediate reaction of the king, was to reach into his pockets looking for some money to help the beggar, but unfortunately he couldn’t find any, as the money he had carried with him had already been exhausted. The king did not want to disappoint the beggar, and looked for something that he could present to the beggar instead of money, but found only the sapphire ring he was wearing in his hand. Without any hesitation the king removed the sapphire ring from his hand and presented it to this beggar. The beggar was shocked and surprised by the magnanimity of the king, and thanked the king profusely for his generosity. The king then went about with his normal duties and completely forgot about the incident.

Many years later two pilgrims from England went on pilgrimage to the holy land which included Palestine, Syria and Jordan. While in Syria the two English pilgrims ran into a storm and were desperately looking for a safe place to spend the night. Suddenly, the path ahead of them lit up, and an old man approached them, accompanied by two youths carrying candles. The old man inquired from the pilgrims about their nationality and the name of their king. On hearing that they were from England and their king was Edward, the old man guided the two pilgrims to an inn, where he found them food and lodging. The next morning the storm had abated and when the pilgrims went to see the old man to thank him for his kind gesture, before departing, the old man gave them a sapphire ring to be handed over to King Edward, saying that he was John the Evangelist and received the ring from the king, many years earlier in the guise of a beggar. He congratulated the king for his generosity, and said that he would see Edward in Paradise in six months time.

The pilgrims returned to England after the successful completion of their pilgrimage, and lost no time in meeting the king, and gave him the ring and the old man’s message. Edward recognized the ring which he had given the old beggar many years ago, and he immediately made preparations for his death. Exactly six months after this in 1066, Edward passed away due to natural causes, and was buried with the ring, the crown and other burial regalia, in front of the high altar in Westminster Abbey, which was founded by him. In 1161, Edward the Confessor was canonized by Pope Alexander III, and after this he was referred to as St. Edward.

In the year 1269 a magnificent tomb was built by King Henry III (1216-72), for Saint Edward, and it was decided to move the body from its original site near the high altar, to this tomb. When his coffin was opened almost 200 years after it was buried, to everyone’s surprise the body was found in an excellent state of preservation. However, it was decided to remove all ornaments from the body before its re-burial. Accordingly, the crown on his head, the sapphire ring on one of his fingers, and other vestments were removed from his body, prior to the re-burial, and these items became a part of the crown jewels of England. Whatever might be the merits or de-merits of the re-location of the corpse of a saint, which according to modern standards would have been judged as a desecration, the items of jewelry removed from the body, became objects of great veneration by the succeeding monarchs of England, to the extent that it was presumed that divine authority originated from these items. This explains why the only surviving relic of St. Edward’s ornaments, the St. Edward’s sapphire still adorns the Imperial State Crown of Great Britain, right at the top of the crown, in the center of the Maltese cross.

The crown of St. Edward the Confessor was used by succeeding monarchs until it was destroyed by Oliver Cromwell, together with other crown jewels, following the execution of Charles I, in 1649. After the restoration of the monarchy in 1660 and the ascendancy of Charles II, the eldest surviving son of the executed Charles I, as the king of England, a new crown was made by Sir Robert Vyner, incorporating remnants of earlier crowns. This new crown made of solid gold weighed 2.25 kg and was set with 444 gemstones consisting of diamonds, sapphires, emeralds, rubies and pearls. The new crown was named the St. Edward’s Crown although it has nothing in common with the destroyed crown of St. Edward the Confessor. But, some authorities believe that at least the lower half of the St. Edward’s Crown, belongs to original crown of St. Edward the Confessor. The St. Edward’s Crown has been the coronating crown for every British Monarch since Charles II, with the exception of Queen Victoria who commissioned a special crown that came to be known as the Imperial State Crown,for her Coronation in 1838. 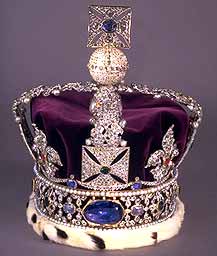