The name reflects the type of gemstone and country of origin

The name “Star of Lanka” reflects both the type of gemstone and its country of origin. The gemstone is a blue star sapphire with a distinct six-rayed star, and the country of origin is Sri Lanka, former Ceylon, which is the premier source of large blue star sapphires in the world. If one comes across a large blue sapphire of over 100 carats in weight in a museum or private collection there is almost a 60 % chance that the gemstone originated in Sri Lanka.

Appropriate naming of the gemstone as “Star of Lanka” by ROM

The authorities of the Royal Ontario Museum has named the gem stone appropriately as the “Star of Lanka”, so as not to leave any doubt in the minds of visitors to the museum about the country of origin. This is in sharp contrast to what we see in the American Museum of Natural History in New York and the National Museum of Natural History of the Smithsonian Institution, where extraordinarily large blue sapphires of Sri Lankan origin had been given names implying a different country of origin, tending to distort the truth, and causing confusion in the minds of visitors. 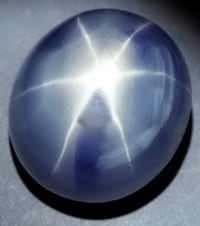 The famous sapphires in question are the 563.35-carat “Star of India” which is a Sri Lankan stone displayed at the American Museum of Natural History, New York City, and the 182-carat “Star of Bombay”, which is another Sri Lankan stone displayed at the National Museum of Natural History of the Smithsonian Institution, in Washington D.C. The names given to these sapphires imply that the gemstones originated from India, a country which has never produced an extraordinarily large blue sapphire or blue star sapphire in its long history. On the other hand Sri Lanka had been famous for its large blue sapphires and blue star sapphires from time immemorial dating back to the period of King Solomon in the 10th century B.C. It is sincerely hoped that the respective authorities of these world renowned museums would correct the misnomer in respect of these famous sapphires, so as to reflect the correct country of origin, and not leave room for any ambiguity.

Color, cut, clarity and carat-weight of the stone

The “Star of Lanka” is a 193-carat, oval, cabochon-cut, high domed, blue star sapphire with a distinct six-rayed star positioned at the center of the dome-shaped face, with its arms extending down to the base of the stone. In terms of the quality of the star, the “Star of Lanka” rivals its more famous cousins such as the “Star of India” and the “Star of Bombay.” The stone is opaque and milky, which tends to reduce the tone of the blue color of the sapphire. The color of the sapphire is a grayish blue. The dimensions of the gemstone are 30mm x 27mm x 23 mm.

Causes of color, milkiness and asterism

Sapphires belong to the group of minerals called corundum, which is crystalline aluminum oxide (Al2O3). Pure corundum is colorless, but when some aluminum atoms in the crystal lattice are displaced by titanium and iron atoms, a blue color is produced. The cause of milkiness, also known as “silk” in the gem trade, is the presence of minute rutile fibers in the crystal, which are arranged in bundles in a three-fold pattern, at an angle of 60? to one another. Light entering the gemstone through the dome-shaped face is reflected by these three bundles forming three luminous bands that intersect with one another to form the six-rayed star. Thus both milkiness and asterism in star sapphires are caused by rutile fibers. The star is most pronounced only when the dome-shaped face is exposed to a direct source of light such as sunlight or light emanating from an electric torch or a flash light. An interesting feature of the star is that it appears to glide over the surface, as the stone is rotated from side to side between the thumb and the fore-finger.

History of the “Star of Lanka”

Allan Kaplan who was born on December 29, 1913, either in New Jersey or New York, claimed to be of Jewish origin. He was interested in the Natural Sciences from early childhood and while at high school also developed an interest in minerals. Graduating from high school in 1933, Allan Kaplan worked for the Denver Museum of Natural Science, during one summer and helped excavate the fossil of a mammoth along the South Platte River. Soon he began collecting fossils and minerals from the Colorado region and began selling them by placing small ads in the magazine “Rocks & Minerals.” Between the years 1934 and 1937, Kaplan followed a three-year course in geology and mineralogy, at the University of Colorado, and then continued his studies from 1937 to 1938, at the Colorado School of Mines. Kaplan had now acquired sufficient knowledge in geology and mineralogy, enabling him to embark on a full time career in mineralogy, collecting, identifying and building up mineral collections and disposing them to interested parties by running small ads in mineralogy magazines, such as “Rocks & Minerals” and “The Mineralogist.” Later he expanded his business by advertising in the Colorado newspapers, as a buyer of mineral specimens and collections.

After passing out of college in 1938, Kaplan decided to make a trip to Brazil, in search for minerals. His first trip proved to be extremely successful, and more trips followed, and before World War II, he had almost made 10 trips to Brazil. During this period he became one of the main suppliers of minerals to the Smithsonian, Harvard and American Museums of Natural History. Some of the notable mineral specimens he acquired in Brazil, included large topaz crystals ranging between 100 to 600 pounds, smoky quartz crystals of up to 200 pounds, and large chrysoberyl, cassiterite and amazonite crystals.

Kaplan enlisted in the army during World War II in 1943, and served in Italy, with the 15th Army Air Corp. After the war ended in 1945, Kaplan was discharged from the army, and he returned to Brazil, his favorite hunting ground for minerals. He purchased more topaz and amazonite crystals, and around 60 very large aquamarine crystals each about 12 inches long and weighing up to about 6 pounds. He also purchased some newly discovered large crystals of Brazilianite. After the war he made up to 12 trips to Brazil. However by the year 1958, Kaplan’s interests shifted from minerals to gemstones both cut and rough. It is around this time that he acquired the “Star of Lanka” blue sapphire, and sold it to the Royal Ontario Museum. Kaplan made several gemstone purchasing trips to Columbia to buy emeralds. Later he also visited countries in the east, such as Burma and bought rough rubies. It is not known whether he visited Sri Lanka (Ceylon) during these trips to the east, but he also dealt in sapphires that originated mainly in Sri Lanka. Allan Kaplan became one of the most prominent gem dealers in New York. It is reported that at one time owned Kaplan owned the famous “Mogul Emerald” one of the largest and historic emeralds in the world. A 16-carat ruby in his collection was sold for $ 3.6 million in 1988. Kaplan died at the age of 85 years in New York, on October 14, 1998.

The “Star of Lanka” blue star sapphire is presently on display at the Royal Ontario Museum, in Toronto, Canada. It is displayed in the Inco Gallery of Earth Sciences, which was opened in May 1999. The Gallery is divided into four major sections :- Dynamic Earth, Restless Earth, Earth : The Alien Planet, Treasures of the Earth.

In the Treasures of the Earth Gallery, is the S. R. Perren Gem and Gold Room, where the ROM’s collection of more than 1000 beautiful gemstones and specimens are housed.

The Royal Ontario Museum received the largest corporate gift in its history, a sum of $ 10 million from Teck Cominco Limited to the Renaissance ROM project. Part of this enormous contribution will be used to establish the Teck Cominco Suite of Earth Sciences Galleries, which is scheduled to open in the Weston Family Wing in December 2008. The 6,900 square-foot combined gallery space will be divided into three sections :- The Inco Limited Gallery of Minerals, The S. R. Perren Gallery of Gold and Gems, and the Canadian Mining Hall of Fame Gallery.

The Inco Limited Gallery of Minerals will showcase 2,300 specimens of minerals and meteorites. All major aspects of mineralogy, such as classification of minerals, physical and chemical properties of minerals, causes of mineral color and geological environments necessary for spectacular mineral growth will be explored in this gallery. The S. R. Perren Gallery of Gold and Gems will feature 1000 of the ROM’s most beautiful and rare specimens, which includes one of the largest cerussite specimens weighing 900 carats, know as the “Light of the Desert,” and the stunning “Star of Lanka” , a 193-carat blue star sapphire of Sri Lankan origin. The Canadian Mining Hall of Fame Gallery will showcase the biographies and personal stories of inductees through an interactive video wall.

The early history of “Star of Lanka” blue sapphire

It is not known exactly when and where Allan Kaplan purchased the “Star of Lanka” blue sapphire. The “Star of Lanka” was sold to the ROM in 1958, the same year he switched over from being a mineral dealer, to a rough and polished gemstone dealer. Thus, Allan Kaplan must have purchased the gemstone in New York, possibly from another dealer. It is not possible for him to have purchased it in the east, because he traveled to the east much later after making several trips to Colombia to purchase emeralds.

Thus the stone must have originated in Sri Lanka, either in the early or mid 20th century, when the main source of blue sapphires in Sri Lanka was the alluvial deposits of the Ratnapura district, the traditional gem producing area of Sri Lanka. After its discovery, the rough gemstone must have been cut and polished by the traditional gem cutters of Sri Lanka, who were well experienced in the cutting of star sapphires. The greatest challenge in cutting a star sapphire is to get the proper orientation of the stone to create the dome-shaped face of the finished gemstone, in order to get the best star effect. This can be done only by an experienced gem-cutter who has enough experience in cutting star sapphires. Sri Lanka is a country that has a gem cutting tradition as old as its gem mining industry, and the country never exported gemstones in the rough state even in the olden days. All rough gemstones were cut and processed in the country, before export, and processed gemstones commanded a much higher price than rough stones. Thus the “Star of Lanka” blue sapphire was in all probability cut and polished in Sri Lanka.

The cut and polished “Star of Lanka” must have been later exported either to the London or Paris markets by one of many gem and jewelry dealers and exporters, operating in the capital city of Colombo. Substantial quantities of gemstones were also sent to the Hong Kong and Japanese markets, and through these markets some gemstones eventually reached the American markets.

One thought on “Star of Lanka Sapphire”