The Bismarck Sapphire gets its name from Countess Mona von Bismarck who owned the 98.6-carat deep blue Sri Lankan sapphire, since the time she purchased it, perhaps during her visit to Sri Lanka in 1926, which was one of the stopovers of her worldwide honeymoon cruise with her millionaire husband Harrison Williams, in his own steamer the Warrior, one of the largest and most expensive pleasure boats of the time. 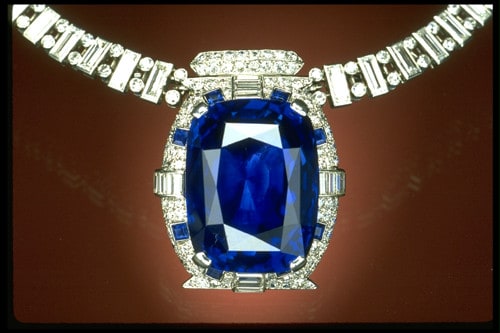 Combination of desirable characteristics in the sapphire

Cutting of the Bismarck Sapphire

The fact that the cut is perfect and well proportioned shows that the sapphire had been re-cut either in the United States or Europe after it was purchased as a cut and polished stone in Sri Lanka, which has a cutting tradition as old as its ancient mining industry. Sri Lanka always sold its gemstones as cut and polished stones even in ancient times, and never sold any gemstones in the rough. But, one of the disadvantages of this ancient cutting industry, was that the cutters always tried to maximize for quantity at the expense of quality.

The re-cutting of the sapphire must have been done by the reputed jewelry firm Cartier’s, who set the sapphire as a pendant to a unique diamond and platinum necklace. In the year 1967, Countess Mona von Bismarck gifted the invaluable necklace to the National Museum of Natural History of the Smithsonian Institution.

Some chemical and physical properties of blue sapphires

The Bismarck Sapphire, is the blue variety of the mineral corundum, which is a crystalline form of aluminum oxide in which the blue color is caused by a few atoms of titanium and iron displacing aluminum in the crystal lattice. Corundum has a hardness of 9 on the mohs scale, one less than that of diamond. But, the absolute hardness of corundum is only about one-quarter that of diamond. Yet corundum is quite tough and hard enough to impart good qualities of durability to sapphire-set jewelry that can resist wear and tear. Usually blue sapphires do not show fluorescence under ultra-violet light, but blue sapphires from Sri Lanka and Kashmir can show a red or orange fluorescence in long wave length ultra-violet light.

Source and origin of the Bismarck Sapphire

The source of the sapphire

The Source of the Bismarck Sapphire that was purchased in the 1920s from Sri Lanka, during the period of British colonial rule, must have been the traditional gem basket of Sri Lanka, known as the Ratnapura district, which is mainly the river basin of one of the biggest rivers of Sri Lanka, the Kalu Ganga, which originates in the Adam’s Peak Mountain range of the south-central region of Sri Lanka. The alluvial gem deposits of this region had produced rubies and sapphires since ancient times dating back to the period of King Solomon in the 10th century B.C. The Ratnapura district seems to have an unending supply of blue sapphires, and continues to produce blue sapphires of good quality up to this day. However, within the last fifty years new deposits of blue sapphires have been discovered in the Rakwana, Pelmadulla and Elahera regions. The Rakwana blue sapphires come up to the standards of the elusive Kashmir Sapphire, that even some reputed foreign gem-testing laboratories have mistakenly issued reports, certifying them to be Kashmir Sapphires.

The geological origins of the sapphire

The Bismarck Sapphire like all other corundum originated about 500 million to 2 billion years ago, about 60 km to 400 km deep inside the earth, in its upper mantle, where extremes of temperature and pressure were conducive to their formation. The corundum formed was incorporated into the basaltic magmas which subsequently rose to the surface forming igneous rocks, some of which were later converted to metamorphic rocks. Long and continuous periods of erosion that lasted over millions of years, released the corundum bearing portions of the rocks that deposited as alluvial gravel in the low lying plains and flood basins of rivers. 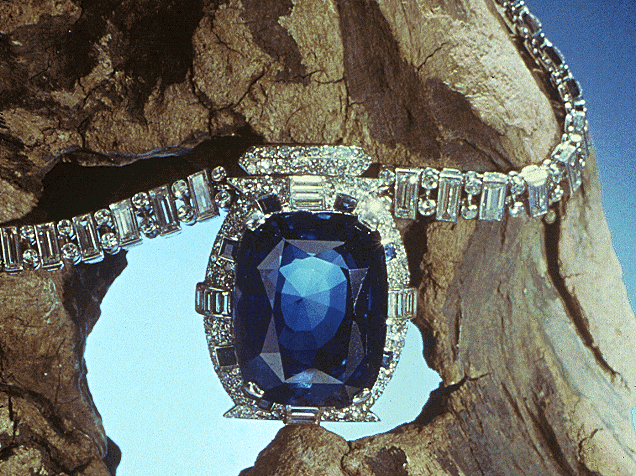 History of the Bismarck Sapphire

Countess Mona von Bismarck was an American socialite and fashion icon famed for her beauty and fashion sense, and became internationally famous as a trend setter in the world of fashion, and was the first American woman to be declared the best-dressed woman in the world in 1933 by a syndicate of renowned fashion houses of Paris. 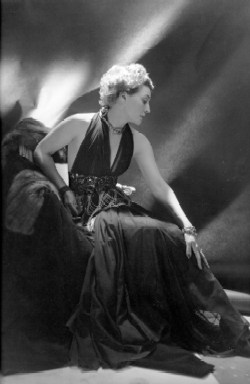 Born in 1897 in Louisville, Kentucky, to Robert Sims Strader and his wife, Mona was just five years old, when her parents were divorced in 1902, and was subsequently brought up together with her brother, by her paternal grandmother. The family settled in Lexington where her father purchased the Forkland farm. During her life time Mona married on five occasions, out of which the third and fourth marriages were highly successful and lasted until the death of her spouses. The first two marriages ended up in divorce prematurely and the last marriage ended with the accidental death of her husband Umberto de Martini, who was the only husband much younger to her in age, and who had in fact married her for her money and position.

Mona married her third husband, multimillionaire utilities executive, Harrison Williams on July 2nd, 1926. Williams who was a widower and senior to her by 24 years, was at that time considered to be the richest man in America with a fortune estimated at $ 680 million. Immediately after the marriage the couple set out on a honeymoon cruise around the world, on his steamship the “Warrior” believed to be the most expensive pleasure boat in the world at that time. It was during this trip they docked at the harbor of the capital and port city of Sri Lanka, Colombo. Perhaps it was during this visit to Colombo, that Harrison Williams purchased the renowned blue sapphire and gifted it to his wife, which subsequently came to be known as the Bismarck Sapphire.

Mona lived a life of luxury with her multimillionaire husband, and among the assets owned by the couple included two mansions in New York, and one in Palm Beach, several apartments in Paris, and the villa Il Fortino on the Italian Island of Capri, which was reputed to have been owned at one time by Caesar Augustus and later Emperor Tiberius.

Harrison Williams died in 1953, and in 1955 she married Count Edward von Bismarck, a long time friend of the family, and the grandson of the former Chancellor Otto von Bismarck of Germany. The couple lived mostly in Paris at an apartment in the famed Hotel Lambert, and later at the villa in Capri. Count Edward von Bismarck died in 1970 and Mona was once again widowed. In the year 1971 she married for the fifth time, but her paramour this time was 14 years younger to her, and was the former physician to Count Bismarck, Umberto de Martini. After the death of Martini in 1979, Mona realized that Martini had actually married her for her money and position.

Mona’s marriage to Multimillionaire Harris Williams and later Count Edward von Bismarck elevated her social status, and made her famous among the elite of society. Among her circle of famous and influential friends were members of the European nobility, politicians, actors, writers, artists, and designers. Countess Mona von Bismarck died in 1983 and was buried on Long Island by the graveyards of her former husbands, Harrison Williams and Edward von Bismarck. After her death her estate was used for the establishment of the Mona Bismarck Foundation according to her wishes. The foundation is registered in the State of New York, and has a Paris Cultural Center, and an exhibition space located opposite the Eiffel Tower. The Foundation promotes a broad range of artistic, literary, scientific and educational activities. Over the last twenty years the foundation had organized over 70 international exhibitions that were open to the public free of charge.

Purchase of the Bismarck Sapphire at Colombo

When Harrison Williams and his wife Mona visited Colombo in 1926, in all probability, they must have purchased the Bismarck Sapphire from one of the most reputed dealers of gemstones and jewelry in Sri Lanka at that time, Messrs O. L. M. Macan Markar & Co, which was established in the year 1860. Macan Markar & Co handled some of the most famous gemstones that were exported out of Sri Lanka at that time such as the “Blue Giant of the Orient.” Their main business outlet at that time was situated at the Grand Oriental Hotel in Colombo, the most prestigious hotel during the colonial period. The company exported gemstones to the London and Paris markets on a regular basis.

Donation of the Bismarck Sapphire Necklace to the Smithsonian Institution

The enormous blue sapphire was probably re-cut by Cartier’s before setting it as the centerpiece of a pendant surrounded by baguette diamonds and eight other smaller square-cut sapphires, placed at symmetrical positions. The necklace to the pendant was made up of platinum and smaller round brilliant-cut diamonds. The magnificent necklace remained the property of Countess Mona von Bismarck up to the year 1967, when she decided to donate it to the National Museum of Natural History of the Smithsonian Institution, at Washington D.C. The Bismarck Sapphire Necklace is one of the most prominent and celebrated exhibits out of the 7,500 gemstone exhibits in the Janet Annenberg Hooker Hall of Geology, Gems, and Minerals of the institution. The sapphire mounted on the necklace which was unnamed at the time it was gifted to the institution was named the Bismarck Sapphire Necklace to perpetuate the memory of Countess Mona von Bismarck who gifted the priceless piece of jewelry to the Smithsonian Institution.

5) Siemens.com – forum for science, industry and business – understanding the origin of rubies and sapphires to improve prospecting strategies – published 4-12-2007.

8 thoughts on “The Bismarck Sapphire Necklace”