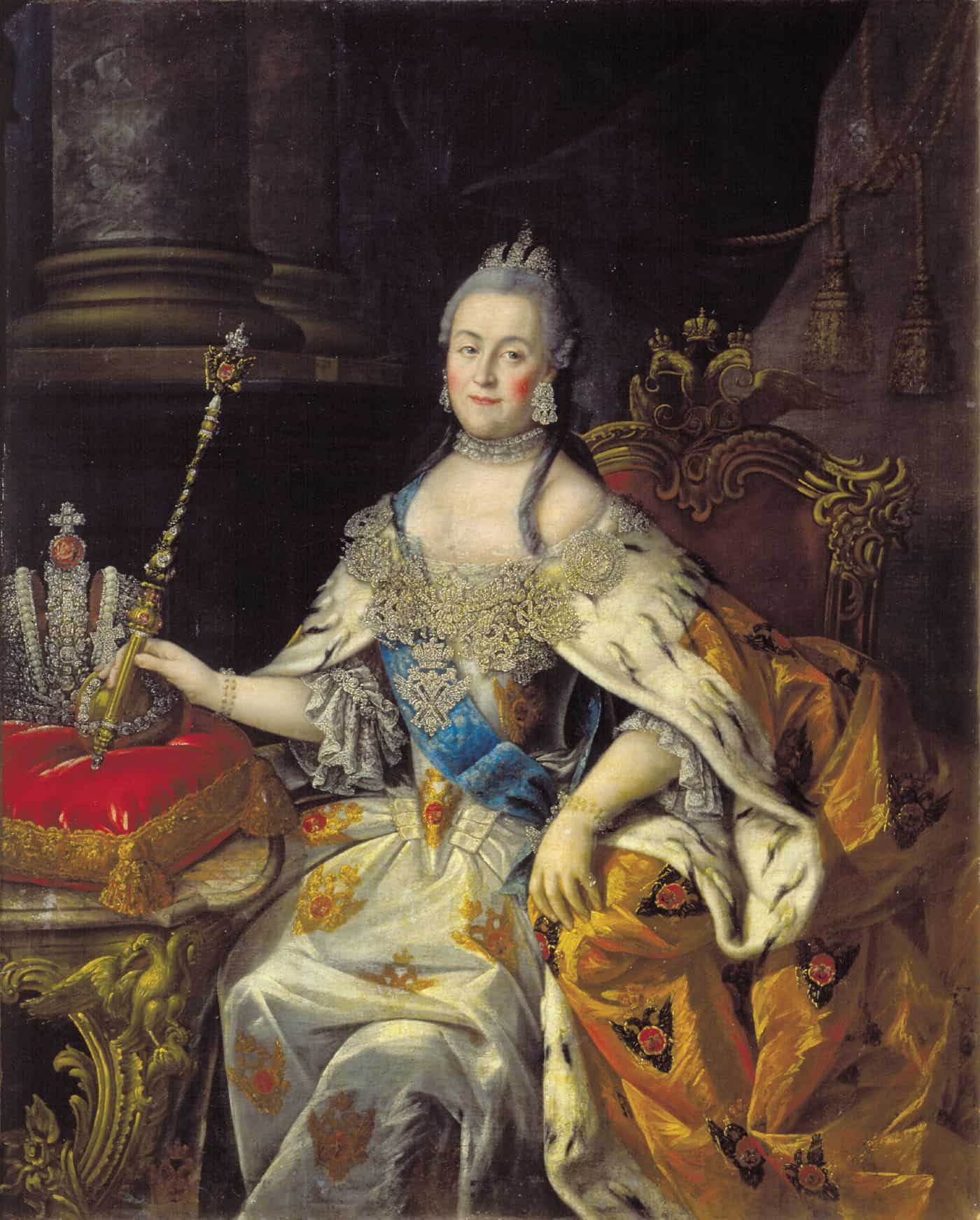 The Catherine the Great’s Ruby is a 398.72-carat, semi-polished, somewhat pear-shaped, blood-red, fiery gemstone, mounted on the top of the Great Imperial Crown.

Like all other large rubies of the past found in the jewelry collections of several monarchies around the world, the Catherine the Great’s Ruby is also not a ruby but a large spinel. In the past, when gemology and geology had not developed as a science, spinels were not identified as a separate mineral. The large red stones which displayed a fire of their own were thought to be large rubies, and were considered to be priceless and much sought after by monarchies around the world. The large red gemstones were set in the crowns, tiaras, necklaces and other items of jewelry of the monarchy. The greatest collection of these large red spinels are found in the Crown Jewels of Iran. The British Crown Jewels also contain some very large and famous spinels, like the Timur Ruby and the Black Prince’s Ruby, previously thought to be rubies.

Identification of spinel as a separate mineral

The situation continued until 1783, when the French mineralogist Louis Rom de Lisle identified spinel as a separate mineral from ruby, using chemical analysis and physical properties. It was shown that rubies do not grow to enormous sizes as the chromium atoms incorporated in the crystal of corundum, that causes the red color of rubies, also causes cracks and fissures to develop in the crystal. Only a very few ruby crystals may receive the appropriate conditions enabling them to grow undisturbed to considerable sizes. Thus good quality rubies are smaller in size and generally less than 3 carats in size. Most of the famous rubies in the world are less than 100 carats in size, and those greater than 100 carats are only a few in number. Thus the so-called enormous rubies in the crown collections of the world are in fact not rubies but actually spinels.

Some of the important differences between rubies and spinels can be summarized as follows :-

1) While rubies are corundum made up of Aluminium Oxide (Al2O3), Spinels are not corundum, and are made up of Magnesium Aluminium oxide (MgAl2O4).

2) Corundum occurs in al the colors of the rainbow, and only the red variety of corundum are known as rubies. Spinels occur in shades of red as well as in other colors, such as pink, purple, violet. blue. green, yellow, black and brown.

The non-identification of rubies and red spinels as separate minerals for a long time was caused by their somewhat close physical and chemical properties, and the fact that they usually occur together in the same mines.

Source of Catherine the Great’s Ruby

The source of the 398.72-carat enormous spinel was in all probability the ancient ruby and spinel mines of Badakhshan in northeastern Afghanistan, famous for its Balas rubies and Lapis Lazuli. The famous traveler Ibn Batuta wrote in 1354 A.D. in his travelogue as follows :-

“People generally attribute the Lapis Lazuli (Arabic-Lazward) to Khurasan, but in reality it is imported from the mountains of the Province of Badakhshan, which has given its name also to the ruby called Badakhshi.”- Travels of Ibn Batuta.

The Badakhshi Rubies later came to be known as Balas Rubies. The Badakhshan mines were in active production until the end of 19th century, and all the large Balas Rubies (spinels) in the collections of jewels of monarchies around the world are believed to have originated in these mines.

History of the Catherine the Great’s Ruby according to Yevdokimov

Yevdokimov wrote in an article titled “A Ruby from Badakhshan,” published in the journal Soviet Soldier in December 1991, that Catherine the Great’s Ruby was actually found by a Chinese mercenary soldier by the name of Chun Li, who fought for the mighty conqueror of Central Asia, Tamerlane (Timur), who set up a vast empire between 1366 and 1405, that rivalled the empire created by Alexander the Great in 3rd century B.C. Timur set up his capital at Samarkand, and after one of his conquests Timur’s soldiers captured an enormous booty. Chun Li happened to be a part of this expedition, and he failed to turn in some of the booty, and was exiled as a slave to the ruby mines of Badakhshan which was under the domains of Timur. Chun Li discovered the enormous “ruby” while working in these mines, and managed to hide it from his supervisors. Later that night he escaped from the mines with the “ruby” and found his way back to China. Having reached China safely, Chin Li made an attempt to see the Emperor, possibly to present the stone as a gift to the Emperor, and expecting some form of compensation in return. But, unfortunately before he could see the Emperor, a palace guard came to know about his mission, and stole the gemstone after killing him. The guard was later apprehended when he tired to dispose of the stone to a jeweler, who informed the palace authorities. Finally the guard suffered the same fate as Chun Li and the enormous gemstone became the property of the Emperor of China.

Whatever may be the merits of the above story, the large “ruby” remained the property of the Chinese Emperors for over 250 years, until Nikolai Milescu also known as Nikolai Spafari was appointed as Ambassador of the Russian Empire to China in 1675, whose mission included the settlement of several border disputes between Russia and China, improving trade relations with China, and the survey of newly incorporated Russian Lands along the Amur River. While in Beiging Nikolai Spafari was shown the enormous red “ruby” by the Chinese Emperor Kon Khan, and Nikolai showed an interest in purchasing the gemstone for the Russian Emperor if he was interested. The message was passed to Moscow about the large red ruby, and Emperor Alexi Mikhailovich, the second Czar of the Romanov dynasty, expressed his interest and lost no time in sending a return message to Beiging. The giant red “ruby” was then duly purchased by Nikolai Spafari from the Chinese Emperor on behalf of Czar Alexi Mikhailovich. Thus the red ruby entered the Romanov Crown Jewels in 1676 A.D.

The Romanov Crown Jewels entered the Russian Crown Treasury, the forerunner of the Russian Diamond Fund, started in 1719 by emperor Peter the Great, to separate the Romanov family wealth from that of the state. Peter the Great constructed a special diamond chamber for this purpose at the Winter palace in St. Petersburgh. Catherine the Great’s Ruby remained in this Chamber until 1762, when Catherine the Great ascended the throne of Russia, after the successful coup d’etat organized by Catherine’s lover Grigory Orlov against her husband Peter III. Catherine the Great ordered the design and manufacture of a new Imperial Crown for her Coronation as the Empress of Russia. The court jewelers Jeremiah Pauzie and Ekart were assigned the task of producing the Great Imperial Crown. 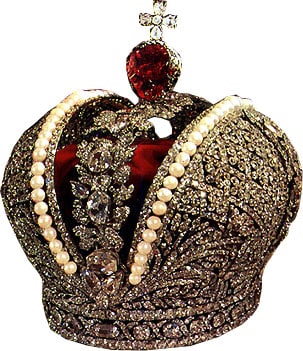 The Great Imperial Crown of Catherine the Great

The Great Imperial Crown of Catherine the Great, was based on the medieval Byzantine crown, consisting of two half spheres representing the eastern and western halves of the of the Roman Empire, connected by an arch of oak leaves and acorns, symbolizing the temporal power of the monarchy. The two half spheres in this case represents the two continents spanned by Imperial Russia. The crown is surmounted by the 398.72-carat Catherine the Great’s Ruby (Spinel), which in turn is surmounted by a jeweled cross. The cross symbolizes three things: the faith of the sovereign, the God-given power of the monarchy and the supremacy of the divine order over earthly power.

The crown was quite heavy weighing approximately 5 pounds. The crown is adorned with 4,936 diamonds arranged in floral and leaf patterns on the entire surface of the two hemispheres and the connecting arch. Two rows of large white pearls, border the edges of the mitre.

Is is said that Catherine was so impressed by the design of the new Imperial Crown, that she did not mind its slightly higher weight. She told the jeweler that she would manage to wear the load throughout the four to five hour coronation ceremony. But it turned out that she bore the load of the crown throughout her long reign that lasted 34 years from 1762 to 1796.

Loose Precious and Semi-Precious Stones of The Iranian Crown Jewels

2 thoughts on “Catherine The Great’s Ruby”