The Ruspoli Sapphire is also variously known as the Wooden-Spoon Seller’s Sapphire and the Great Sapphire of Louis XIV, and all three names seem to have been derived from persons who at one time had owned the sapphire during the course of its long history. The sapphire is reported to have been discovered by a wooden-spoon seller of Bengal in India, and this explains the origin of the name “Wooden-Spoon Seller’s Sapphire.” The sapphire later came into the possession of the Italian Prince, the Marquis of Cerveteri, Francesco Maria Marescotti Ruspoli (1672-1725), from whom the sapphire derives its second name. Eventually, the sapphire is purchased by King Louis XIV (1638-1715) of France from whom it derives the third name. 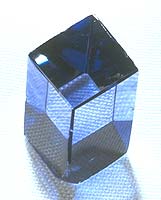 A flawless sapphire with a simple cuboidal shape

The Ruspoli Sapphire is a 135.8-carat almost flawless light blue sapphire with perfect clarity and transparency and a simple cuboidal shape like a lozenge, with only six facets, equivalent to the six faces of a cuboid. The stone has only one small feather and crystal inclusion, otherwise, the gemstone is a perfectly flawless specimen. Even though the sapphire is said to have been discovered in Bengal by a wooden-spoon maker in the 17th century, the characteristics of the stone seem to indicate its probable origin, viz. Burma or Sri Lanka.

The simple six-sided shape of the sapphire is not the natural shape of the sapphire crystal, as sapphires crystallize in the trigonal crystal system, producing elongated hexagonal prisms. Thus the six-sided cuboidal shape is actually the result of deliberate cutting and polishing process, which possibly was carried out by the ancient cutters of India. The cuboidal six-sided cut is actually a type of table-cut, one of the most ancient cuts developed in India, with a flat square or rectangular facet on one side, and with or without a culet on the other side. In the absence of a culet, the cut has two flat parallel facets, and depending on the thickness, we have either a flat portrait diamond which is slightly thick, or a cuboidal diamond where the thickness is much greater, and almost equal to the dimensions of the main facets.

Some chemical and physical properties of sapphires

The Ruspoli Sapphire is the blue variety of the mineral corundum, which is crystalline aluminum oxide, in which the blue color is caused by the presence of trace amounts of titanium and iron, which displace aluminum atoms in the crystal structure of aluminum oxide. The hardness and specific gravity of the Ruspoli Sapphire is consistent with that of corundum, having a hardness of 9 on the mohs scale and a specific gravity of 3.99 to 4.02.

History of the Ruspoli Sapphire

Legend of the wooden-spoon maker

The origin of the Ruspoli Sapphire is uncertain, but according to legend the sapphire is said to have been discovered by a poor wooden-spoon maker from Bengal, in India. The Bengali writer Sourindro Mohun Tagore describes the gemstone in his classic work, the Mani-Mala, and calls the gemstone the “Wooden-Spoon Seller’s Sapphire,” which undoubtedly refers to the origin of the stone, believed to have been discovered by a poor wooden-spoon seller from Bengal. Reference to the same sapphire was also made in 1892, when Edwin Streeter in his book, “Precious Stones and Gems,” describes it as a 133.06-carat flawless sapphire of a distinctive lozenge shape, residing at the Musee au Jardin des Plantes, in Paris.

How the sapphire reached Europe from India ?

After the discovery of the sapphire in the mid-17th century, it was probably cut and polished in India, and sold to a gem dealer from Europe. Around that time there were so many diamond and gemstone dealers from Europe, who were combing the cities and country side in India, looking for diamonds and other precious stones that were abundantly available in the country. One such dealer was the Frenchman Jean Baptiste Tavernier, who made up to six trips to India in the 17th century, and was the chief supplier of diamonds and precious stones to King Louis XIV of France. In his book “The Six Voyages of Jean Baptiste Tavernier” published in 1676, Tavernier describes some famous and unique diamonds he had seen during his trip to India, together with illustrations. It appears that the Ruspoli Sapphire had escaped his attention, either because he was not aware of its existence in the 17th century, or because the stone being a sapphire of a simple shape might not have aroused his curiosity. Other famous travelers and dealers who came to India, include Anthony Jenkins, Knight Chardin, Shirley Brothers, and George Minvaring.

The sapphire is acquired by Prince Francesco Maria Ruspoli

The “Wooden-Spoon Seller’s Sapphire” was acquired by the Italian Prince Francesco Maria Marescotti Ruspoli (1672-1725), the Marquis of Cerveteri in the late 17th century. Francesco Maria is credited with the creation of the famous Ruspoli Regiment in 1708, at his own expense, which constituted around 1000 men, and serve the Holy See. In the year 1709, the Ruspoli Regiment defeated the numerically superior Austrian Army at the battle of Ferrara, and pushed the Austrians back to the north of the Po river, and thus freed the States of the Church. Pope Clement XI, was full of gratitude to Francesco Maria, for his achievement and elevated Cerveteri to a Principality, and Francesco Maria’s title changed from Marquis to Prince. In 1721, Pope Benedict XIII, conferred the title of Principe Romano to Francesco Maria, for his services to the Holy See.

After the downfall of the monarchy following the revolution, the National Assembly in 1791, directed that an inventory of the French Crown Jewels kept in the Garde Meuble (Public Treasury) be prepared, before the jewels were put on public display. According to this inventory there were a total of 9,547 diamonds, worth 21 million francs in the collection. Some of the notable diamonds and gemstones included in this collection were the 140.5-carat Regent diamond, the 67-carat heart-shaped French Blue diamond, the 55-carat pale yellow Sancy diamond, the 20-carat orange-pink Hortensia diamond, and the 135-carat lozenge-shaped Ruspoli Blue Sapphire. Other priceless items in the collection included the state and coronation regalia of the French kings collected over the centuries, and included the Charlemagne crown, Louis XV’s 1722 coronation crown, the 60-cm medieval gold scepter of Charles V, the “le main de justice” which is an ivory-topped gold scepter, the coronation sword, the Ampulla, orbs, onyx chalices and other assorted historic relics.

The theft of the French Crown jewels in 1792, the Ruspoli Sapphire is not part of the haul

The crown jewels were put on public display at the Garde Meuble, but in September 1792, was again closed to the public, during rising violence in Paris, associated with the revolution. Then on the morning of September 17, 1792, came the shocking news that there had been a break-in at the Garde Meuble the previous night. It transpired that the thieves had climbed up the colonnade of the building facing the Louis XV’s palace, and gained access through a window. It appeared that they had broken the seals of eleven cabinets containing the crown jewels and the state and coronation regalia. Three commissioners at the Garde Meuble who discovered the robbery, found that the most important gemstones in the collection, the Regent diamond, the French Blue diamond, the Sancy diamond and the Hortensia were gone. Also missing were a number of lesser diamonds and several smaller items from the state regalia. But, fortunately the 135-carat lozenge-shaped Ruspoli Blue Sapphire, was intact and escaped the attention of the robbers. Probably this was because of the unconventional simple cut of the sapphire, which the thieves must have considered to be worthless.

The band of six men who were believed to have taken part in the robbery was led by a man named Guillot, and included another notorious criminal by the name of Depeyron. The Police also suspected that one or more of the commissioners were also involved in the conspiracy and might have assisted the robbers. Guillot escaped to London with part of the haul, where in 1796 he tried to dispose of the French Blue diamond, and eventually ended up in prison, and the diamond disappeared. The Regent and the Hortensia diamonds were recovered from an attic in a house in Paris, in 1793, after Depeyron who was about to be executed told the police about the whereabouts of the haul. The Sancy was also not recovered.

Re-assembly of crown jewels after Napoleon Bonaparte and sale of the crown jewels during the third republic. Ruspoli Sapphire escapes from being auctioned.

After the rise of Napoleon I (1804-14) as the Emperor of France more pieces were added to the collection of crown jewels, and again during the second empire of Napoleon III between 1852 to 1870. However after the fall of Napoleon III following the Frano-German war of 1870-71, and the establishment of the third republic, in May 1887, the government of President Jules Grevy, decided to dispose of the crown jewels of France, to thwart any attempts either by Royalists or Bonapartists to restore the monarchy again. The entire collection was to be sold save for a few items of historical and educational value to be exhibited at the Louvre Museum. The crowns of Louis XV and Napoleon Bonaparte were preserved for historical reasons, but the original gemstones were removed and replaced by colored glass. Some of the Royal and Imperial coronation regalia were also preserved, and also the Regent diamond. The Louvre Museum’s director who was allowed to choose a few items for educational purposes, chose the Ruspoli Sapphire, which thus escaped being brought under the hammer. The rest of the crown jewels which were divided into 69 lots were offered for sale, and Tiffany’s of New York, purchased 24 of these lots. Some of the lots were purchased bythe Paris-based jewelry firm Van Cleef & Arpels.

Today a few pieces of the original crown jewels of France are on display at the Galerie d’Apollon of the Louvre Museum, in Paris. These include Louis XV’s and Napoleon Bonaparte’s coronation crowns, Empress Eugenie’s tiara and crown, Marie Amelie’s (wife of Louis Philippe) diamond and sapphire parure, the Regent diamond, the Sancy diamond, and the Hortensia diamond. The only piece displayed at the Louvre Museum, that had remained as part of the French Crown Jewels, since the time of King Louis XIV, is the Ruspoli Sapphire, which had survived the French revolution, escaped from being stolen, and also subsequently escaped from being auctioned. The Louvre Museum has been paying out large sums of money to re-acquire pieces of the former French Crown Jewels, either stolen or sold at the auctions of 1887.