Susie Clark of Evening Shade, Arkansas, had first visited the Crater of Diamonds State Park as a kid, 33 years ago in the company of her mother and grandmother from Germany. In mid-April this year she decided to pay a return visit to the Park in the company of her husband, and try their luck at diamond hunting in the world’s only diamond producing site open to the public, where visitors are allowed to search for diamonds for a fee, and keep what they find. The couple spent nearly a week at the park hunting for the elusive diamond, in the Park’s 37 ½-acre search field, but nothing fruitful had turned up. Then on the last day of their diamond hunting on Thursday, April 23, 2015, according to Susie Clark, before leaving the site that afternoon, she said a prayer to God, “Are you going to bless me and let me find a diamond today?” Hallelujah ! Shortly after her prayer she saw a shining stone sticking out of a furrow ridge on the plowed surface. She picked up the shining stone, which she knew was indeed a diamond. She alerted her husband who examined the stone and was overjoyed at Susie’s find. Togehter, they carried their find to the Park’s office where the park staff confirmed after examination that their find was indeed a diamond. The teardrop-shaped, white diamond weighed 3.69 carats, and according to Park records Mrs. Clark’s diamond is the 122nd diamond found at the park this year. It is also the largest diamond found so far this year. Since, Susie Clark found the diamond immediately after saying a prayer on her last day of searching at the park, she named her teardrop-shaped gem the “Hallelujah Diamond.” 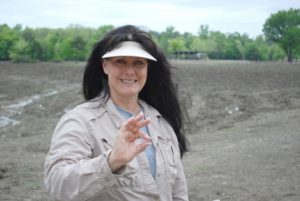 Susie Clark holding the 3.69-carat, Hallelujah Diamond between her fingers

Commenting on Mrs. Clark’s find, Park Interpreter Waymon Cox said, “the large diamond is about the size of a pinto bean. The gem is frosted white with a pearlescent, metallic shine. This is the largest diamond found so far this year, and it’s the largest one found since April 16, 2014, when a 6.19-carat white diamond, named the Limitless Diamond, was found at the park. Mrs. Clark’s diamond is the 122nd diamond found at the park this year.” 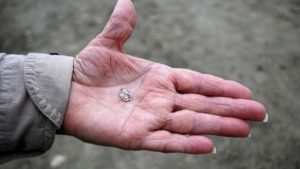 Hallelujah Diamond held in the palm of the hand

Explaining the circumstances that led to the discovery of the diamond, Cox said the park’s maintenance staff had plowed the search area earlier in the week and the park had also experienced a lot of rain over the past several weeks, creating ideal conditions for finding diamonds on the surface of the field. While regular plowing loosens the diamond bearing soil, erosion caused by heavy rain helps to bring diamonds to the surface, by carrying away lighter soil particles and dirt away, and leaving any heavier diamonds exposed on the surface. Diamonds are a bit heavy for their size and they lack static electricity. So during heavy rainfall dirt sticking to any diamonds on the surface slides off easily, leaving them exposed, increasing the chances of them being detected by sparkling when sunlight falls on their surface. 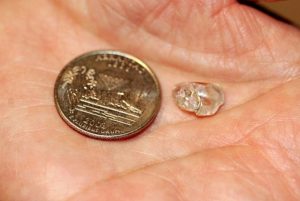 3.69-carat Hallelujah Diamond alongside an Arkansas commemorative quarter for comparison

The 37½-acre plowed field that constitute the search area of the Crater of Diamonds State Park, is actually the eroded surface of a lamproite pipe formed about a 100 million years ago. In terms of surface area it is the 8th-largest diamond-bearing deposit in the world. However, diamonds found in the Crater of Diamonds site are generally less than one carat in size. Most of them are about the size of a match head or even smaller. Diamonds of significantly larger sizes ranging from 2 to 40 carats have also been discovered, but their occurrence is extremely rare. From 1972 to 2012, a period of 40 years, out of a total of 30,436 diamonds discovered by visitors, only 900 diamonds were more than 1.00-carat in weight. This works out to a percentage of approximately 3%. Hence, 97% of the diamonds discovered in the Crater of Diamonds State Park are less than 1.00 carat in weight and a substantial number of them in fact fall under the category of “Melee” diamonds, which are less than 0.25 carats (25 points) in weight. This explains why the two diamond prospecting companies, The Arkansas Diamond Mining Company and the Ozark Diamond Mines Corporation, which originally prospected for diamonds in the region, finally wound up their operations, in the early 1950s and formed a partnership in 1952 to develop the site as a tourist attraction, and introduced the novel concept of opening the mine to the public, to prospect for diamonds for a nominal fee and allowing them to keep what they find. The joint-project turned out to be a moderate success, and in 1972, the Arkansas State Government decided to move in, and acquired the park, converting it to the Crater of Diamonds State Park. The new state administration of the park decided to continue with the open policy of allowing the public to scout for diamonds for a fee and keep what they find. Facilities provided for visitors were vastly improved after the State Government took over the administration of the park.

A total of over 75,000 diamonds have been unearthed at the Arkansas diamond site since the first diamonds found in 1906 by John Huddleston, the farmer who at that time owned the land, long before the site became an Arkansas state park in 1972. The largest diamond ever discovered in the U.S. was unearthed here in 1924 during an early mining operation. Named the “Uncle Sam Diamond,” this white diamond with a pink cast weighed 40.23 carats. Notable diamonds found by park visitors since the state park was established at the site include the “Amarillo Starlight Diamond,” a 16.37-carat white diamond discovered in 1975 which ranks as the largest diamond ever found by a park visitor; the 3.03-carat Strawn-Wagner diamond discovered in 1990 by Shirley Strawn of Murfreesboro and cut to perfection in 1997 by the renowned diamond firm Lazare Kaplan International of New York, to form the 1.09-carat, round brilliant-cut, D-color, internally flawless Strawn-Wagner diamond, graded by AGS as triple zero, equivalent to ideal cut/ideal color/ideal clarity. The Strawn-Wagner diamond is presently on display in a special exhibit in the Crater of Diamonds State Park visitor center. Another notable diamond discovered in 1977 is the flawless 4.25-carat Kahn Canary diamond, an uncut, triangular-shaped gem, that was exhibited in many cities around the U.S. and overseas. Former First Lady Hillary Clinton borrowed the Kahn Canary from its owner, Stan Kahn of Pine Bluff, Arkansas, and wore it in a special, Arkansas-inspired ring setting designed by Henry Dunay of New York as a special way to represent Arkansas’ diamond site at the galas celebrating both of Bill Clinton’s presidential inaugurals.

Over 40 different rocks and minerals are unearthed at the Crater making it a rockhound’s delight. In addition to diamonds, semi-precious gems and minerals, including amethyst, garnet, peridot, jasper, agate, calcite, barite, and quartz, are also found in the park’s search area.