The Taj Mahal Diamond and jade pendant, with a history of nearly 400 years, designed and created during the reign of Mughal Emperor Jahangir Shah, by jewelry craftsmen of the Mughal  period, is due to come for sale on December  13, 2011, at a  Christie’s special evening sale to be held at the Rockefeller Plaza, New York,  known  as the “Elizabeth Taylor Legendary Jewels – Evening Sale” at which 80 of her most iconic jewelry pieces will go under the hammer. There is no doubt about the historic provenance of this rare and magnificent jewelry creation of the Mughal period, as the diamond is inscribed in the Persian language in Arabic characters, revealing the identity of the original owner of the pendant and the year it was created.  The inscription reads :-  “Nur Jahan, Begum Padshah ; 23 ; 1037” –  Nur Jahan, Lady of the Padshah; 23; 1037 A.H. Nur Jahan was the Empress consort of Emperor Jahangir Shah.  The number 23 refers to the 23rd year of his rule, and 1037 After Hijra, the year of its creation in the Islamic  calendar, which is equivalent to 1627/1628 A.D. 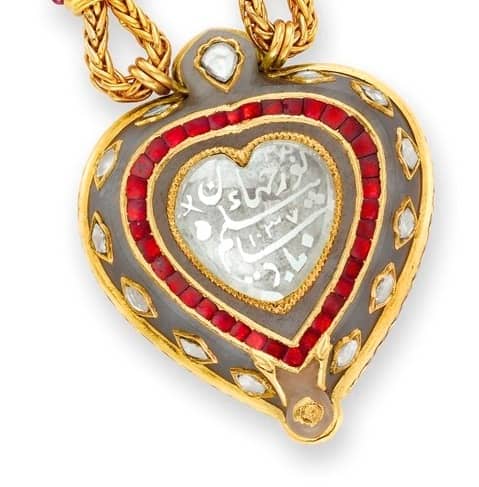 Apart from its historic provenance, the inscription on the diamond also adds to its rarity. There are at least three famous Indian diamonds that are so inscribed – The Shah Diamond, the Akbar-Shah/Jahangir Shah Diamond and the Taj Mahal Diamond.  The Shah Diamond is internationally renowned, and part of the collection of the Kremlin Diamond Fund. Inscribing diamonds by Mughal diamond cutters and polishers, had been a jealously guarded secret art , that has puzzled modern day diamond cutters, who inscribe diamonds only with the help of modern technology, such as a fullerite pen or laser beams. However, the significance of inscribing on diamonds, is the realization that such great monarchs in the past were fully aware of the everlasting property of diamonds, and hence regarded it as an ideal medium to immortalize their names and their period  of rule, more potent than  inscriptions on other media, such as granite, that were liable to disintegrate with age.

Nur Jahan’s diamond and jade pendant was inherited by Emperor Shah Jahan, who gifted it to his favorite wife Mumtaz Mahal, who unfortunately died in 1631, while giving birth to her 14th child.  The pendant subsequently came to be known as the “Taj Mahal Pendant” as it became a memento of the Emperor’s eternal love for his beloved wife, just as much as the Taj Mahal mausoleum became a symbol of Shah Jahan’s undying love for Mumtaz Mahal. Read more on the Taj Mahal/Nur Jahan diamond and jade pendant by clicking on this link :- Taj Mahal Diamond