The name “Star of Asia Sapphire” seem to reflect both the type of gemstone, which is a star sapphire and the geographical region from where the gemstone originated, the Asian continent. In fact the stone is believed to have originated from the famous Mogok region of Burma (Myanmar), historically famous for its rubies as well as sapphires. 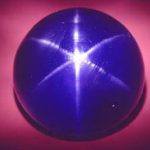 One of the largest blue star sapphires in the world

The “Star of Asia Sapphire” is a 330-carat blue-violet star sapphire, with a distinct six-rayed star perfectly positioned at the center of the cabochon-cut stone, with rays extending towards the girdle of the stone. The presence of rutile fibres makes the stone milky and transluscent, and is also responsible for the asterism (star effect) of the gemstone. The “Star of Asia Sapphire” is one of the top quality blue star sapphires in the world, perhaps only second to the renowned 563.35-carat “Star of India Sapphire” in the American Museum of Natural History in New York.

The cause of the blue-violet color

All sapphires whether normal or asteriated (showing star effect) belong to the class of minerals known as corundum, which are crystalline forms of Aluminum oxide. Color in corundum is caused by the displacement of some aluminum atoms in the crystal lattice, by atoms of different transition elements such as chromium, titanium. iron, vanadium, etc. In the case of blue sapphires, the blue color is caused by titanium and iron atoms. But, the “Star of Asia Sapphire” having a blue-violet color, indicates that the element vanadium is also involved.

The cause of asterism

The six-rayed “star-effect” known as asterism is caused by aggregates of minute fibers of rutile (titanium oxide) in the crystal that are aligned in a three-fold pattern at an angle of 60? to one another. Light entering the sapphire through its dome-shaped face is reflected by the bundles of rutile, forming three lines that intersect with one another at the center, resulting in a six-rayed star, which seem to glide on the surface as the stone is rotated sideways with the dome-shaped face exposed to a direct source of light such as direct sunlight or artificial light emanating from a flash-light or torch.

The “Star of Asia Sapphire” has been cut perfectly with the star properly aligned at the center. The unknown master-cutter who handled the original rough stone must have been an expert par excellence, with a lot of experience in the cutting of star sapphires. The greatest difficulty in cutting a star sapphire is to decide on the exact side of the rough stone where the dome-shaped face of the cabochon should be located in order to bring out the maximum asterism. A slight mistake might result in a failed star, a star displaced to the side, or a star with some of the rays missing. Credit should also be given to a cutter who would look at a rough stone, and predict correctly that it has the potential of being transformed into a superb six-rayed star sapphire, which only a few people in the trade are able to do. Thus the potential value of a star sapphire seems to depend entirely on the skills of the master cutter.


Source of the “Star of Asia Sapphire”

The discovery of the Mogok mines

The source of the “Star of Asia Sapphire” is the Historic Mogok tract of Burma, famous for its rubies and sapphires since the 15th century. According to legend the Mogok mines were discovered by outlaws and bandits who were settled in the rather inhospitable area by the King of Mandalay, after being banished from the city. The outlaws were successful in winning their freedom when they sent large quantities of rubies and some sapphires to the King as a gift. The King pardoned them for their crimes and granted them the freedom to return to the main stream life in Mandalay. However, fortunately the ex-convicts decided to stay put and continue with their mining operations. However, the King immediately promulgated a decree that all large rubies discovered at the mines would automatically become the property of the King, and miners who failed to comply with the decree were threatened with the death sentence. The imposition of this harsh decree resulted in the disappearance of large rubies that were either hidden for generations or broken into smaller portions.

The origin of the placer deposits at Mogok valley

The Mogok valley where the rubies and sapphires were discovered is situated about 4,000 km above sea level, and is surrounded by mountains that form part of the eastern Himalayan orogenic system formed by the collision of the Eurasian plate with the Indian sub-continental plate about 40 to 60 million years ago. The energy generated by this tectonic activity transformed corundum-containing igneous rocks to metamorphic rocks by contact metamorphism. The erosion of the igneous and metamorphic rocks over millions of years, released the corundum containing gravel that deposited in the valley as placer deposits, from where corundum is mined today.

Types of gemstones found in the Mogok valley

Almost 80-90 % of the production of corundum in the Mogok valley consists of rubies, and the remaining 10 % consists of blue sapphires, other sapphires, peridot, aquamarine, amethyst, zircon, tourmaline moonstone, topaz, and diopside. In Burma blue sapphires always occur in intimate association with rubies, unlike in other regions of the world. A mine situated near Kabaing, at Kin, in the Mogok region, was famous for its blue star sapphires, and large rough stones of over 100 carats in size had been discovered. Another area where sapphires had been found in significant quantities is Kyaungdwin, near Kathe, about 13 km west of Mogok. Other important locations where sapphires had been mined include Chaungyi, Bernardmyo, and the area between Ingaung and Gwebin.

History of the “Star of Asia Sapphire”

Rubies and sapphires from the Mogok mines reach the Indian market

The “Star of Asia Sapphire” has an uncertain early history, but the stone is believed to have been owned at one time by the Maharajah of Jodhpur. This is not surprising, because the main producing and consuming nations of gemstones and diamonds during the period of the discovery of rubies in Mogok, were the different kingdoms and sultanates of the Indian sub-continent. Thus large quantities of rubies and sapphires mined in the Mogok mines were smuggled out of Burma, and reached these independent kingdoms, where they had a ready market, and were snapped up by the ruling monarchies of these kingdoms. According to Aziz (1942), the Mughal treasury had an excellent collection of fine rubies that were added to the treasury beginning from the period of the Mughal Emperor Jalaluddin Muhammed Akbar (1556-1605) to that of Emperor Aurangzeb (1658-1707). Aziz lists about 35 rubies varying in size from the about 35 carats to around 372 carats. Most of the rubies in this collection were more than 100 carats in weight, and were believed to be of Burmese origin. This period also corresponds with the period of peak production in the Mogok mines of Burma. Likewise, even the “Star of Asia Sapphire” that originated in the Mogok mines, would have reached Jodhpur, where it was purchased by the Maharajah.

The kingdom of Jodhpur

Jodhpur, is presently situated in Rajasthan State, which is one of the northwestern states of India. Jodhpur was founded by Rao Jodha, a Rajput warrior ruler in the year 1459, and reached the zenith of its power under the Rajput prince Rao Maldeo, during the period 1532-69. In 1561, after Akbar the Great invaded Jodhpur, the kingdom swore allegiance to the Mughals. In 1679, Jodhpur was again invaded by the Moghul Emperor Aurangzeb, who plundered the city of Marwar. Subsequently the Moghuls lost control of the kingdom, which was able to assert its independence, in association with Jaipur and Udaipur. The Princely state finally came under the control of the British, in the year 1818, and remained so until India became a republic in the year 1947, when finally Jodhpur joined the State of Rajasthan in the year 1949.

It is not precisely known during which period in the history of Jodhpur, the “Star of Asia Sapphire” became the property of the Maharajah of Jodhpur. But it is known for certain that the renowned sapphire had changed hands and eventually came into the possession of Martin Leo Ehrmann, who was the greatest collector and supplier of minerals and gemstones the world had ever known, who supplied rare and valuable minerals and gemstones, to many universities and museums around the United States. Among his notable clients were the American Museum of Natural History, New York, Harvard University, the Natural History Museum of Los Angeles, and the National Museum of Natural History of the Smithsonian Institution.Read more on the life history of Martin Leo Ehrmann under DeLong Star Ruby

The “Star of Asia Sapphire” is acquired by the Smithsonian Institution

In the year 1961, the “Star of Asia Sapphire” was acquired by the National Museum of Natural History of the Smithsonian Institution, in Washington D.C. from Martin Leo Ehrmann, with whom the Institution has had dealings since 1932, when they purchased part of the Kunz collection of minerals and gemstones from him. Again in 1938, Martin Ehrmann sold the entire Calvert collection of fossils to the Smithsonian Institution. Among the other notable pieces of minerals and gemstones sold by Martin Ehrmann to the Smithsonian Institution include, a 7.5 kg kunzite crystal from Urpuca in Brazil, a 287-carat cushion-cut deep green grass color Burmese peridot, and a 2.6-carat faceted purple scorodite from Tsumeb.

Mineral Science Collections at the Smithsonian