The enormous 478.68-carat Sri Lankan blue sapphire gets its name from the onetime owner of the gemstone Queen Marie of Romania (1875-1938), queen consort of King Ferdinand of Romania (1865-1927). The King purchased the gemstone set as a drop to a diamond necklace, in 1921 just one year before his coronation in October 1922, and presented it to Queen Marie, who later wore the splendid necklace which was a perfect match for the exquisitely crafted sapphire tiara which she wore for the coronation. 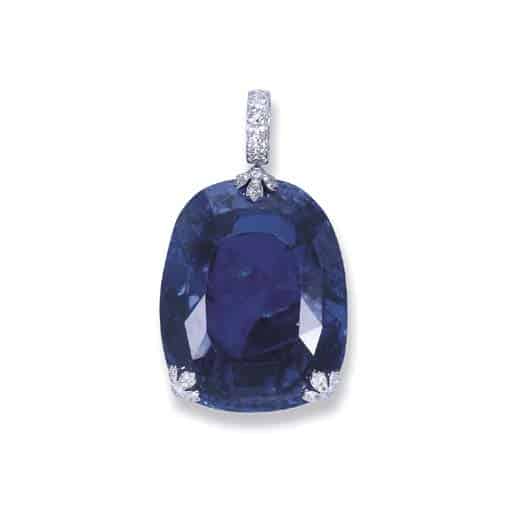 The Queen Marie’s Sapphire is a 478.68-carat cushion-cut deep cornflower blue sapphire of Sri Lankan origin, certified by the Swiss Gemological Institute as a natural Sri Lankan sapphire with no evidence of thermal enhancement. A combination of excellent color, cut and clarity makes the Queen Marie’s sapphire one of the most famous sapphires in the world. The cut of the gemstone is a rectangular step-cut, and the shape is a cushion shape with one end slightly narrower than the other, giving a sort of drop shape to the stone. It is perhaps the 4th largest blue sapphire in the world and the 3rd largest blue sapphire of Sri Lankan origin. See table below. 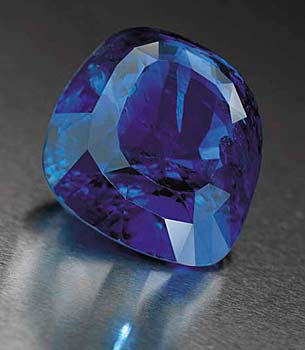 Heat treated sapphires show a dull chalky green fluorescence in short wave length ultra-violet light. The absence of such fluorescence in the Queen Marie’s Sapphire is a strong indication that the stone has not been heat treated.

History of the Queen Marie’s sapphire

The early references to the enormous blue sapphire

The earliest reference to the Queen Marie’s sapphire was made in 1913, when the jewelry firm Cartier acquired the gemstone and set it on a magnificent sapphire and diamond necklace together with seven other sapphires, but later modifications were made excluding the smaller sapphires and making the enormous sapphire the centerpiece of the necklace. Cartier again changed the design of the diamond and sapphire necklace in 1919 and exhibited the exquisitely crafted necklace at their autumn show held in the Hotel Maria Cristina, in San Sebastian, Spain. The magnificent necklace became the most popular exhibit at the show, that the word reached the Queen of Spain, Victoria Eugenia, who with the Queen Mother Maria Cristina and the Princess of Bourbon made a special visit to the exhibition to admire the beauty of the fabulous jewelry on display.

The sapphire is purchased by Ferdinand I, King of Rumania

The fame of this fabulous necklace spread far and wide and reached the royal family of Romania. It was then that the King of Romania, Ferdinand I, decided to purchase the splendid diamond necklace with the enormous blue sapphire suspended as a pendant in 1921 and present it to his Queen consort, Queen Marie, the daughter of the duke of Edinburgh and grand-daughter of Queen Victoria and Czar Alexander II of Russia. In October 1922, after the formation of the Greater Romanian State following the end of World War I, that almost doubled the size of his kingdom, Ferdinand I was solemnly crowned the King of Rumania at Alba Lulia. During this coronation Queen Marie wore the splendid necklace given by her husband which matched perfectly with the extraordinary sapphire tiara she wore for the occasion, which she purchased from the Grand Duchess Vladimir who fled Russia during the October 1917 revolution.

Ferdinand who was born in 1865, was the son of Prince Leopold of Hohenzollern of Germany and was adopted as the crown prince of Romania in 1889, by his uncle King Carol I, who had lost his only child and heir apparent. Crown Prince Ferdinand married Lady Marie in 1893, the daughter of the Duke of Edinburgh and grand-daughter of Queen Victoria and Czar Alexander II of Russia. Ferdinand commanded the Romanian army during the second Balkan war in 1913, and with the death of his uncle in October 1914, succeeded to the Romanian throne. During World War I, he sided with the allied powers in 1916, prompting the Germans to occupy his country, and Ferdinand fled the country forming a Government in exile in Lasi, in Moldavia. In May 1918, Romania was forced to sign a separate peace treaty with the Central Powers, but after the defeat of the Central Powers and the end of World War I in November 1918, Romania joined the Allies again and was rewarded by the creation of a Greater Romania which included Transylvania and Banat from Hungary, Bukovina from Austria, and Bessarabia from Russia. The territory of the Greater Romania was almost double that of the original kingdom of Romania. In October 1922, Ferdinand I was crowned the king of all Romanians at Alba Lulia. Ferdinand I, who had promised land reforms to his people all along was finally able to achieve it through his Prime Minister General Alexandru Averescu, whom he helped to install after plotting a royal coup.

King Ferdinand excluded his playboy son Carol from the royal succession by an act of state, and instead appointed his young grandson Prince Michael as his successor. Accordingly, on the death of King Ferdinand in July 1927, Michael was proclaimed the King of Romania, under a three-member regency. But, in 1930 when Carol returned from exile, the regency was dissolved and Carol took over as the effective King of Romania, with Michael reduced to the rank of a crown prince. Michael again ascended the throne as King of Romania after the abdication of his father in 1940, but was only a figure head under the military dictatorship of General Ion Antonescu. Opposition to the military dictatorship began to grow and by 1944, King Michael was the the main focus of the opposition against the Antonescu regime. In August 1944, the military regime was overthrown by the King, and Antonescu was arrested.

Abdication of King Michael in December 1947

After the end of World War II in 1945, a power struggle ensues between the western style democratic parties and the soviet style communist party, and the King appointed a pro-communist Government led by Petru Groza in March 1945, under pressure exerted by the Soviet Government. Eventually when elections were held in November 1946, the Communist Party used the government agencies and security forces under their control to suppress the democratic opposition, and manipulated the election results to give an overwhelming victory to the communists. The Communist Party eventually eliminated all opposition by giving long prison terms to leaders of democratic parties, and finally abolished the monarchy by the forced abdication of King Michael. on December 30, 1947. King Michael went into exile and settled in Geneva

Queen Marie of Romania’s sapphire which was inherited by King Michael was carried by him when he went into exile in Geneva, in 1947, and was later acquired by Harry Winston, the famous New York based jeweler. Subsequently the sapphire was incorporated in a platinum pendant held by platinum and diamond floral motifs at three points.

Queen Marie’s sapphire came up for auction at Christie’s Geneva on November 19, 2003

One thought on “Queen Marie of Romania’s Sapphire”