The Logan Blue Sapphire gets its name from Mrs. John A. Logan in whose honor the stone has been named after she donated it in 1960 to the National Museum of Natural History of the Smithsonian Institution, in Washington D.C. 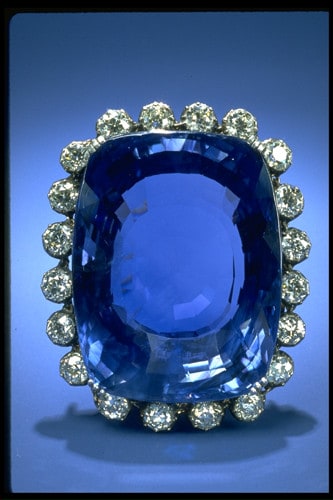 Characteristics of the stone

The Logan Blue Sapphire is a 422.99-carat, rich deep blue, internally flawless, cushion-cut stone, of Sri Lankan origin, which is perhaps the second largest faceted blue sapphire in the world. The stone has been cut with a large table, and for a stone of perfect clarity and color like the Logan Blue Sapphire, this is not much of a disadvantage, even though the whole interior of the stone is clearly revealed. In spite of this apparent disadvantage the stone has a unique and an unparalleled beauty, for a sapphire of such enormous size. The beauty of the stone is further enhanced by the sparkling, round brilliant-cut white diamonds, 20 in number, with a total weight of 16 carats, surrounding the stone, in a special brooch setting. Mrs. John A. Logan is reported to have donated the enormous blue sapphire mounted in this special brooch setting to the institution, and today it is the heaviest mounted gem in the National Gem Collection. 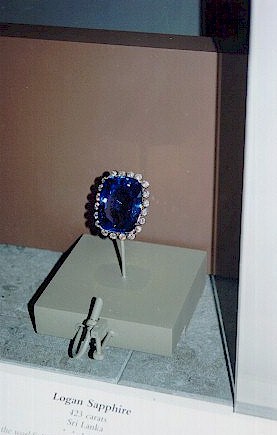 The fact that the stone originated in Sri Lanka, necessarily means that the original cutting of the stone had also been carried out in the lapidaries of Sri Lanka, which can boast of a cutting industry as old as the gem mining industry in the country, which dates back to over two millennia. No gemstones were exported out of Sri Lanka in the rough state even in ancient times. A community that was well versed in the cutting techniques since ancient time were the Moors of Sri Lanka, who were descendants of Arab settlers of the 5th-7th century A. D. But, these ancient cutters always tried to maximize for quantity at the expense of quality and brilliance, and the gemstones exported were usually re-cut in the cutting centers of Europe. It is not known whether the Logan Blue was re-cut in Europe again, after the stone was exported from the country. In any case it appears that whoever who cut the stone originally had deliberately created the large table, in order to reveal as much as possible of the interior of the stone, knowing very well that the stone is totally flawless, with a rich blue color.

The world’s 1st, 2nd and 3rd largest blue sapphires are all from Sri Lanka

The Chemistry of sapphires

Sapphires and rubies that were previously thought to be different minerals were shown to belong to the same group of minerals that were subsequently known as corundum, by the French Mineralogist Count de Bouron in 1802. He showed by chemical analysis that both sapphires and rubies were crystalline forms of Aluminium Oxide, and the color difference was caused by the incorporation of trace quantities of different transition elements in the crystal. The red color of rubies were shown to be caused by chromium and iron atoms displacing some of the aluminum atoms in the crystal lattice of aluminum oxide. The different colors of sapphires on the other hand were shown to be caused by other transition elements, such as titanium and iron causing different shades of blue; vanadium causing purple color; iron causing yellow and green; nickel causing green; iron and vanadium causing orange; chromium and iron causing the pinkish orange of Padparadscha and white caused by the absence of any transition element.

Physical and optical properties of Sapphire

Sapphires crystallize in the trigonal crystal system, forming crystals that are hexagonal elongate prisms. The hardness of corundum is 9 on the Mohs scale, which is only one less than diamond. The absolute hardness of diamonds however is four times greater than that of sapphire, the diamond absolute hardness being 1,500 and that of sapphire being only 400. Yet, sapphire is the second hardest natural substance after diamond, and is the next best after diamond for durable gemstone jewelry, that would last perhaps for several generations. The specific gravity of sapphire varies from 3.99 – 4.02. The refractive index of sapphire varies between 1.761 to 1.769, and the birefringence which is the difference between the two is 0.008, which is low. The dispersion which is 0.018 is also low. Pleochroism is very strong, and varies with the type of sapphire. For blue sapphire it is violet-blue to lighter greenish-blue. U-V fluorescence also varies with the type of sapphire, and for blue sapphire it varies from none to orange or red in long wavelength U-V light, for sapphires from Sri Lanka, Kashmir and Montana. Heat treated sapphires can show a dull green fluorescence in short wave length U-V light.

Sapphires are produced in several different countries around the world, but the three most important sapphire producing localities that have set the standards of quality for sapphires are Kashmir, Myanmar (Burma), and Sri Lanka (Ceylon). Kashmir is a predominantly mountainous territory situated in the northwestern region of the Indian sub-continent, at the foot of the great Himalayan range whose peaks reach elevations of greater than 6,000 meters (20,000 ft). The region is a disputed territory over which India and Pakistan had fought three wars, and is presently administered partly by India and partly by Pakistan. The Kashmiri cornflower blue sapphires are considered to be the highest quality sapphires in the world. The cornflower blue color is an intense medium-dark blue color with a velvety appearance. The Burmese blue sapphires are almost equivalent to the Kashmir sapphires and are also highly prized. But, both the Kashmiri and the Burmese blue sapphires are now very scarce, and hard to come by.

The next best sapphires come from Sri Lanka (Ceylon), one of the oldest sources of sapphire and rubies in the world, according to recorded history, which produces blue sapphires from delicate sky blue colors to rich saturated hues. But, in spite of the fact that Sri Lanka had produced sapphires for over two millennia, the supply does not seem to have been exhausted. The Sri Lankan sapphire is lighter and brighter than the Kashmir and Burmese sapphires. The Sri Lankan sapphires are a saturated medium blue and does not normally need color enhancement by heating, and therefore usually sold as natural untreated stones. Hence the demand for Sri Lankan blue sapphires, which has received a worldwide branding for blue sapphires, still known as “Ceylon sapphires.” Sri Lanka is also equally famous for sapphires that show asterism, known as star sapphires. A white opaque form of corundum known as “Geuda”, previously discarded as worthless, is now heat treated in Sri Lanka, following a procedure adopted at first by the gem dealers of Thailand, to produce a bright sparkling blue stone. These heat-treated blue sapphires have a stable color, but there prices are lower than the natural colored stones. The blue color of the treated “Geudas” however  is an inky-blue  and may not be preferred by many sapphire enthusiasts.

The source of the Logan Blue Sapphire

The source of the “Logan Blue Sapphire”, like the “Blue Giant of the Orient” is undoubtedly the traditional and historic gem-mining district of Ratnapura (City of Gems), situated in the Sabaragamuwa Province, of Sri Lanka, and which was the main source of sapphires and rubies for over 2,500 years. Ratnapura district is also the area where one of the highest mountains known as the Adam’s Peak, is situated. This peak is part of the central highlands of Sri Lanka, which occupies the south-central part of the country. The exposed gem-bearing igneous and metamorphic rocks of the central highlands were eroded by the action of heat, heavy rainfall, wind etc. over millions of years, and carried by the rivers and streams that originated from the central hills and flowing towards the low-lying areas eventually ending up in the seas. The eroded gem-bearing gravel was deposited in the flood plains of these rivers as alluvial deposits.

The major river that flows through the Ratnapura district is the “Kalu Ganga” that originates in the Adam’s Peak mountain range. The gem gravels that were washed down the hills were deposited in the flood plains of this river in the district, and became the source of the numerous rubies and sapphires discovered since ancient times. The “Logan Blue Sapphire” in all probability was also discovered in this region.

The early history of the Logan Blue Sapphire

The early history of the Logan Blue Sapphire is not known except for the fact that the stone originated in Sri Lanka. Records of exceptionally large sapphires, rubies and cat’s eyes that originated within the last century (20th century), are available, and had sometimes been reported in the local newspapers. The discovery of the “Blue Giant of the Orient” was reported by a local Sri Lankan newspaper the “Morning leader” on August 23rd, 1907, under the headline, “A moonstone sapphire worth 7,000 pounds” – “The stone was mined in the Ratnapura District. In it’s finished state it is 21/2 inches long, 13/4 inches broad, and its greatest thickness 3/4 of an inch. The sapphire, there is every reason to believe is the largest sapphire in the world.”

However, during this period there is no record of a blue sapphire corresponding to the carat weight of the Logan Blue Sapphire. Thus it can be safely assumed that the Logan Blue Sapphire is actually a 19th century find, records of which are not available. This was during the height of the period of British rule in Sri Lanka. The processed gemstones of this period was exported to the London and Paris markets, and one of the leading exporters of this period was Messers O. L. M. Macan Markar & Co. Ltd. established in the year 1860, who were responsible for the export of the “Blue Giant of the Orient.” Thus it is quite possible that the “Logan Blue Sapphire” was also exported by this company.

The above news item confirms that the “Blue Giant of the Orient” was cut and polished in Sri Lanka. Thus our earlier contention that the “Logan Blue Sapphire” was also cut and polished  in Sri Lanka is to some extent confirmed by this news report, and proves the existence of a centuries old cutting and polishing industry in the country.

The 466-carat “Blue Giant of the Orient” was said to be worth 7,000 Sterling pounds during 1907. Thus we can have a rough idea as to the cost of the 423-carat “Logan Blue Sapphire” during this period, which should be somewhere between 6,000 to 7,000 sterling pounds, assuming that the “Logan Blue Sapphire” is of the same quality as the “Blue Giant of the Orient.” However, we are not aware of the purchaser of the “Logan Blue Sapphire” from the London or Paris jewelry market. We are also not aware as to how the enormous sapphire came into the possession of the family of Mrs. John A. Logan.

The above account of the “Logan Blue Sapphire”  is not complete without a brief biography of Mrs. John A. Logan, who donated the renowned sapphire to the Smithsonian Institution. Attempts to find more details of Mrs. Logan had proved somewhat difficult. Readers who may have information about Mrs. Logan and her family are kindly requested to update this page with the required information.

History of the Gem Trade in Sri Lanka

2) Ceylon – Its Geography, Its Resources and Its people – Elsie Cathleen Cook (1951)