Some of these special settings were constructed on the orders of the ruling Shah of the period with two main objectives in mind. The primary objective of making these settings was to make use of the enormous quantities of loose jewels in the treasury, so as to minimize the chances of pilferage, which was possible when jewels were kept in the loose state. The secondary objective was to turn out something of artistic value which could be preserved for posterity.

The jewel-studded globe is without any doubt one of the most extravagant in the history of jeweled creations in the world with a staggering 35 Kgs. of gold and 51,000 jewels going into its production. The construction of the globe was ordered during the rule of Nasser-ed-Din Shah (1848-96) , with the main intention of ensuring the safety of the enormous quantities of loose jewels in the treasury. Nasser-ed-Din Shah together with his great-grandfather Fath Ali Shah (1797-1834), are credited with the greatest contributions made in re-assembling and enriching the Iranian Crown Jewels, after the plunder of the wealth of Isfahan including the Crown jewels of the Safavid dynasty in 1722, by the Afghan invader Mahmud. 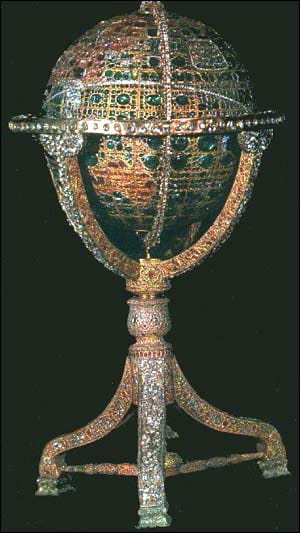 The globe together with its stand has a height of 110 cm and diameter of 45 cm, and like all other terrestrial globes is mounted with the axis tilted at 23.5? to the vertical, and bears a map of the earth on its surface. The globe itself is made up of solid gold, but the stand and the frame holding the globe are made out of wood, covered with a layer of gold. The variety of jewels used on the globe include diamonds, emeralds, rubies, spinels and sapphires. The land masses on the globe are encrusted with rubies and spinels, the largest ruby being 75 carats and spinel 110 carats. The oceans and seas are shown with emeralds, the largest emerald being 175 carats. An interesting feature of the globe is that the countries of Iran, Britain, France and some South Asian countries are shown in diamonds, and the largest diamond used is around 15 carats.

See also  The Three Crowns of the Iranian Crown Jewels

The jewel-studded globe is perhaps the one and only of its type that exists in the world today, and without any doubt the most magnificent globe in existence.

The pale pink table-cut diamond, the Darya-i-Nur (Sea of Light), weighing 186 carats, is the largest pink diamond in the world, and originated in the famous Kollur diamond mines of Southern India. It was believed to be part of the “Grand Table Diamond” or “Diamanta Grand Table” which Tavernier saw when he visited Golconda in 1642, during one of his many trips to India in the 17th century. Tavernier also reported that the “Great Table Diamond” was at one time mounted on the famous “Peacock Throne” of Shah Jahaan. Modern diamond historians in trying to trace the whereabouts of the “Great Table Diamond” eventually concluded that the 186-carat table-cut “Darya-i-Nur” diamond which formed part of the Iranian Crown Jewels, may possibly be a part of this diamond, and another 60-carat oval pink diamond known as the Nur-ul-Ain which also belonged to the Iranian Crown Jewels may be another part. A team of Canadian Experts who conducted research on the Iranian Crown Jewels in 1965, also came to the same conclusion, and it is now generally accepted that the Great Table Diamond was cleaved into two parts during the rule of one of the Mogul Emperors after Shah Jahaan, and the major portion was transformed into the Darya-i-Nur, and the lesser portion into the Nur-ul-Ain. 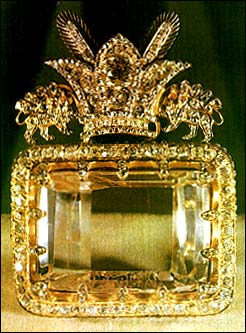 In 1739, Nadir Shah invaded the Mogul capital cities of Delhi and Agra, prompted partly by his desire to lay his hands on the riches of the wealthiest kingdom in the world during that period, and partly by his desire to punish the Mogul rulers for failure to return some of the Crown Jewels of Iran belonging to the Safavid dynasty plundered earlier in 1722 by Mahmud of Kandahar. Nadir Shah carried with him an enormous booty that included the Peacock throne of Shah Jahaan, and several famous diamonds like the Koh-i-Noor, the Darya-i-Nur, the Nur-ul-Ain etc. The two diamonds the Darya-i-Nur and the Nur-ul-Ain subsequently became two of the most celebrated diamonds in the Iranian Crown Jewels.

After Nadir Shah’s assassination in 1747, the Darya-i-Nur fell into the hands of his blind grandson Shah Rukh, who ruled the Afsharid State based in Khorasan with its capital at Mashhad, between 1748 to 1796. After Agha Muhammad Khan Qajar attacked and captured Khorasan and Mashhad in 1796, Shah Rukh was taken prisoner, and was subsequently tortured and forced to surrender all the jewels he possessed, including the Darya-i-Nur. In 1797, after the assassination of Agha Muhammad Khan Qajar, the Darya-i-Nur came into the possession of his nephew and successor Fath Ali Shah (1797-1834), who got his name inscribed on one facet of the diamond. After Fath Ali Shah the diamond was inherited by his grandson and successor Muhammad Shah (1834-1848), from whom it descended to his son and successor Nasser-ed-Din Shah (1848-96).

After Nasser-ed-Din Shah inherited the Darya-i-Nur diamond he wore it as an arm band for sometime believing that the diamond at one time decorated the Crown of Cyrus the Great. Later he also wore it as a brooch, but subsequently he ordered his jewelers to make a special mount for the diamond. The royal jewelers mounted the Darya-i-Nur on an elaborate rectangular frame, 7.2 cm by 5.3 cm , set with 457 smaller diamonds, and 4 rubies, surmounted by the royal symbols of the lion and the sun, signifying the Aryan origin of the Iranian people. The Darya-i-Nur diamond has been preserved in the same setting up to date. 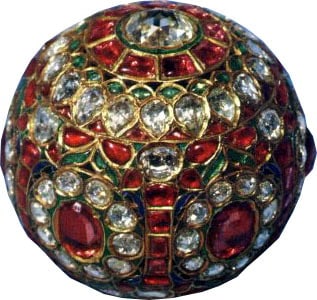 While the jeweled sphere had an aesthetic value and perhaps some significance as a plaything for the mighty Shah, or a symbol of power, the jeweled globe had both an aesthetic and educational value.

While the jeweled sphere was free and had no special mounting, the jeweled globe was mounted on a frame with a stand, and with its axis tilted at 23.5? to the vertical.

The jeweled sphere like the Naderi shield, the royal dish cover, and Fath Ali Shah’s hat ornament, is an example of perfect mathematical symmetry and precision. At either end of the sphere is a large circular white diamond, surrounded by a single-layered zone of trapezium-shaped rubies. The next zone from the top is a single layer of semi-circular shaped emeralds, followed by a layer of leaf-shaped diamonds. The triangular gap between the apices of the leaf-shaped diamonds are occupied by small rubies. The next zone coinciding with the mid-circumference of the sphere, consists of six equally spaced oval-shaped white diamonds, with the intervening spaces occupied two symmetrically placed pear-shaped rubies, and two leaf-shaped emeralds in between the pear-shaped rubies. The remaining gaps in this zone are filled by rubies. The lower half of the sphere is occupied by six equally spaced large circular spinels, each surrounded by ten oval-shaped diamonds of the same size. The space between the large spinels are occupied by a vertical row of rectangular rubies. The large spinels surrounded by diamonds are positioned just below the two leaf-shaped emeralds in the zone just above it. At least another leaf-shaped emerald is paced in line with the previous two leaf shaped emeralds, but below it, so that each large spinel surrounded by white diamonds appear to be a fruit subtended by green leaves.

The mathematical symmetry and precision of this masterpiece in the Iranian Crown Jewels, baffles the modern generation of jewelry craftsmen and enthusiasts, as to how such great precision was achieved, when the tools available for craftsmen of the early 19th century were not so sophisticated as the tools available to the modern craftsmen. The jeweled sphere, in spite of doubts as for what purpose it was used for, undoubtedly is a living monument to the advanced skills possessed by the Iranian craftsmen of the 19th century.