Among the fabulous collection of jewels in the Treasury of National Iranian Jewels there are several household utility items which under normal circumstances may not qualify to be included among the Crown Jewels of a nation, but these items belonged to the royal palaces of the mighty Iranian Kings and were studded with the most expensive of jewels like diamonds, emeralds, rubies and spinels, and sometimes cast out of expensive metals like gold and silver, and thus became part of the Crown Jewels of Iran. The jewel-studded household items turned out of gold and silver give an indication as to the extravagant life styles led by the Iranian monarchs. The philosophy behind such extravagance seemed to be that the kings were chosen by God, and being representatives of the divine on earth deserved an extraordinary life style that elevated them from the rest of humanity.

The utility items found among the Iranian Crown Jewels are :-

However the water decanter and basin used in the royal household was very special made of gold and encrusted with jewels such as emeralds , rubies, pearls and spinels. The period of origin of the water decanter and basin among the Iranian Crown Jewels is not exactly known, but European travelers of the 17th and 18th century had reported the usage of such items in the royal household and by the common people of Iran. This corresponds to the period of rule of the Safavid dynasty after Abbas I (1588-1629) until the end of the dynasty in 1722 after the murder of Shah Sultan Hussain (1694-1722). The period of rule of the Afsharids Nadir Shah and Shah Rukh, Karim Khan of the Zand dynasty, and Agha Muhammad Khan Qajar the founder of the Qajar dynasty, also falls in the 18th century. 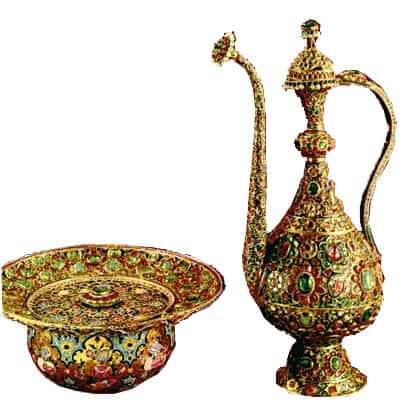 According to the European travelers the water decanter was used to wash the hands of the Shah and his guests before and after meals. The water used for this purpose was lukewarm water scented with rose water. A servant of the royal household would pour the water on the Shah’s hands by tilting the decanter, while another servant held the basin beneath the hands to collect the discarded water. The two servants would then go round the table treating the Shah’s guests likewise. Whenever the Shah left the palace on an official tour of a certain region of his domain all his personal items such as his slippers, his water pipe and tobacco humidifier, including the water decanter and basin, and the other symbols of royal authority such as his sword, the mace and staff was carried by his entourage.

The basin which is 10.5 cm high is divided into two parts; a wider, circular, shallow, dish-shaped upper part with a diameter of 29.5 cm, which fits on to a narrower, deeper and pot-shaped lower part. The base of the upper part is actually a sieve through which water enters the lower pot, and can be discarded when full. The basin is also made up of solid gold, but covered with enamel decorations, and encrusted with emeralds, the largest of which is 25 carats. The weight of the basin is 1.87 Kg.

There is evidence to show that long-necked flacons were in use in Iran even as far back as the 15th century. Some of the Persian miniatures of this period clearly depict these flacons. These flacons are also visible in several miniatures of Fath Ali Shah drawn during the early 19th century.

It is not exactly known to which period in history or to which ruler this flacon belonged. Long-necked flacons were traditionally used for wine in European societies, but in Islamic Iran it is doubtful whether it was used for this purpose, even though the city of Shiraz had been at one time famous for its wine. Flacons were in common use in the royal courts of the Iranian Shah’s, but it is highly improbable that the Shah’s would have permitted the use of wine in their courts, as most of them were devout followers of Islam which prohibited the use of spirits. Thus it is possible that these flacons were used for other drinks served in the royal courts such as coffee and sherbert.

The flacon which has a height of 46 cm, is flask-shaped with an expanded base and a long narrow neck gradually becoming broader towards its mouth. The greatest diameter of the flacon falling in the expanded base is equal to 15.4 cm. The lid that fits into the mouth of the flacon is shaped like an hour glass, and a row of pearls hang from its upper edge. The whole surface of the flacon is encrusted with jewels, which include diamonds, emeralds, spinels, rubies and pearls. The large emeralds and the spinels are placed in symmetrical positions in the expanded region of the flacon and are surrounded by smaller white diamonds. The gaps in between are also filled by white diamonds. The neck and the lid are also studded with smaller diamonds. There are two large emeralds on the flacon weighing 45 carats each. The largest spinel on the flacon weigh 35 carats.

Dish covers were used in the royal household to cover the food served into food bowls, in order to keep the food warm. The royal kitchens were situated quite far from the royal dining room. Therefore after the food was served into food bowls, they were covered immediately with dish covers in order to prevent the cooling of the food, and perhaps the poisoning of the food during its transfer from the kitchen to the dining hall. 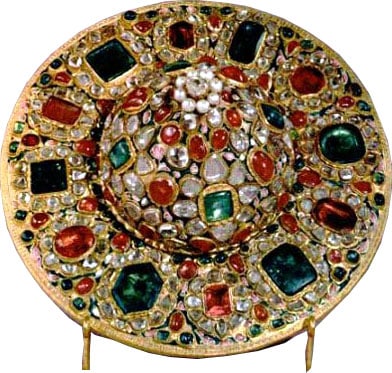 There are many jewel studded dish covers in the treasury of the National Iranian Jewels but all of them conform to the same basic pattern. They are all circular in shape with a dome-shaped center, which acted like a handle. there is a broad lip at the edge, which covered the edge of the dish.

The jewel-studded dish cover in the picture is made of solid gold, and has a diameter of 19 cm and a height of 10cm at center of the dome. The summit of the dome is occupied by a large diamond surrounded by eight pearls. The dome itself is encrusted with emeralds, spinels, and diamonds of varying sizes. There is a ring of smaller spinels right round the base of the dome. Another ring of spinels is found towards the summit of the dome. Somewhere in between on the dome four large emeralds and four large spinels are placed alternating with one another, in the form of a ring. The large emeralds are surrounded by triangular-shaped white diamonds, in the form of a floral pattern. The circular flat area surrounding the dome is studded with six large emeralds and six large spinels alternating with one another, and each surrounded by a row of smaller diamonds. The twelve emeralds and spinels occupy the same positions as numbers on the dial of a circular clock. Just as many other masterpieces in the collection, such as the Naderi Shield, the design on this dish cover also combines mathematical precision with artistic beauty.

In keeping with the status of royal palaces belonging to the mighty Shah’s, besides the interior decorations and the furniture every single item used in the palace including the humble candlestick reflects an aura of regality. Thus the candlestick holder shown in the picture is only one of two such items preserved in the Treasury of National Iranian Jewels, with its unique decorative design, befitting its royal origins. 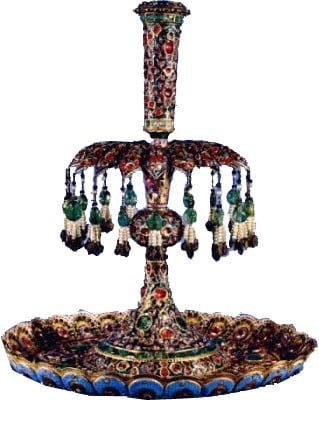 It’s height is 40 cm (16 in) and has a broad dish like decorative base with a wave like margin. The metals used for the holder is not known, but has an enameled surface studded with jewels like diamonds, emeralds, rubies and pearls. The weight of the holder is 5 Kg equivalent to 12 lbs. The base of the central column is conical-shaped, and somewhere just above the half-way point on the column, an umbrella shaped expansion with serrated edges is attached, with a combination of pearls and beads hanging from the pointed end of each serration. The inner surface of the dish-like base, the central column and the upper surface of the umbrella-shaped expansion, are all encrusted with jewels.

It is said that two candle stick holders were placed on either side of the Peacock Throne during formal ceremonies of the royal court.

Coffee as a beverage was first introduced into Arabia in the 15th century, even though the plant was first discovered in Ethiopia by the Arabs and its exhilarating effects were known as early as 850 A.D. Soon after this the coffee drinking habit spread rapidly among the Arabs and later the Persians. Coffee was introduced as a beverage in Europe only in the 16th and 17th centuries. Coffee became the favorite beverage of the monarchies of Arabia and Persia during this period. The main coffee growing area in the world during this period was the region of Yemen in southern Arabia. It is from Yemen that the coffee plant was introduced into Iran, where coffee became a popular beverage after the 15th century. 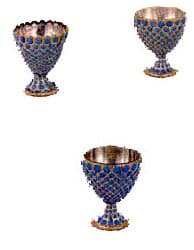 Coffee as a universal beverage is served either hot or cold, and either as plain black coffee or mixed with milk. In the court of the Iranian Monarchies coffee was served plain and hot and usually after meals in small round-bottomed cups made of ceramic or glass. The cups were placed in special coffee cup holders made out of white gold. The interior of the coffee cup holder was plated with a layer of yellow gold and the exterior was encrusted with blue turquoise cabochons that was found abundantly in Nishapur, in Iran. The height of a cup holder was about 5.5 cm (2.2 in).

One thought on “Utility Items among the Iranian Crown Jewels”