The Treasures Exhibition in the Royal British Columbia Museum, which opened on 1st of May will go on till the 30th of September 2009.

This exhibition of some rare and unique items from the British Museum is in its third stop at Victoria, its only North American stop. The exhibition has already been to China and Japan.

The exhibit which has 309 items from different cultures of the world, is to commemorate the 250th anniversary of the British Museum . The items are said to be worth over 1oo million U.S. dollars.

Pauline Rafferty, CEO of the Royal British Columbia Museum said “it is one of the most amazing exhibitions I have ever seen, all pieces are truly spectacular”.

According to the Montreal Gazette, reparation for the exhibition began over 9 months ago involved artists, printers, painters, carvers, designers , carpenters and furniture makers. A replica of the British Museum was created inside an empty 10,000 sq foot gallery.

The Royal British Colombia Museum had to make expensive custom made high security display cabinets for the exhibitions. The cabinets were also made to meet other requirements, such as appropriate humidity,temperature and lighting for  each of the items on display. 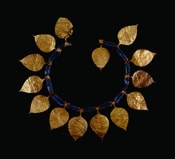 Some of the items on display include a 2600BC  old headdress jewelry found during an archaeological excavation in Southern Iraq   in the 1920’s, a 1.5 million year old prehistoric stone axe, Greek vases and Islamic Art.