The inaugural Kolkata Jewelry & Gem Fair (KJGF), the first of its kind in eastern India, primarily aimed at highlighting the City of Kolkata as an international center of hancrafted gold jewelry, painstakingly created by the traditional craftsmen, known as “kaarigars,” whose exceptional skills had been passed down from generation to generation for thousands of years, was held successfully from January 11 – 13, 2014, at the Milan Mela Exhibition Complex, at Science City in Kolkata. The 3-day international business to business (B2B) gem & jewelry fair attracted over 160 exhibitors, displaying the very best in plain & studded gold jewellery, loose diamonds, and intricate modern and traditional jewellery designs. Between 7,000 and 8,000 people attended the trade exhibition from around India and further afield. Jewelers from Delhi, Mumbai, Gujarat, Bangalore, and Chennai got a first-hand look at the wares offered by the Kolkata goldsmiths, as did their counterparts from Nepal, Singapore and Malayasia. ‘ 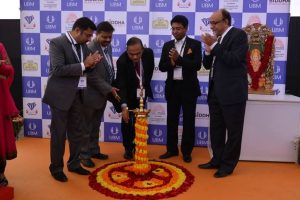 The KJGF, organized by UBM India, while serving as the ideal platform, for domestic and international exhibitors to showcase their signature designs and products, also opened up never before seen opportunities to network, build relationships, and create alliances with key industry professionals. Mr. Vivek Jain, Convenor, Calcutta Gems & Jewellery Association 2002 said, “The Kolkata Jewellery & Gem Fair 2014 by UBM India provided an ideal platform for buyers from all over the country & the gem and jewellery industry in East India to meet and showcase their products. Kolkata’s handmade jewellery finally got a long deserved platform to showcase the best of the creations to the entire world. This is truly a proud moment to be associated with this mega initiative.”
A unique feature of the inaugural edition of the KJGF was the “Golden Hand Award” competition sponsored by M.P. Jewellers; one of the pioneers of jewellery business in East India. The traditional craftsmen of Bengal, the “kaarigars” were invited to participate in the competition by sending in their best handcrafted designs. The competition was held under two categories :- the Gold Category and the Diamond Category. A team of judges, with a keen eye for creativity, design and presentation was appointed, consisting of industry pioneers such as Bachraj Bamalwa, Subir Sen, Pankaj Parikh, Shankar Sen and Bablu De. The actual judging process of the first ever Golden Hand Awards took place on January 7, 2014. Seventy jewellery artisans from Kolkata and neighbouring areas took part in the inaugural version of the competition. The winners of the two categories of the competition were announced subsequently. A winner for a 3rd-category known as the Critic’s Choice was also selected.
The winners of the Golden Hand Award – Gold Category are :-
1) Arun Samanta
2) Sharmili Roychowdhury
3) Krishna Pada Pal

The actual “Golden Hand Award” ceremony was held in the evening of 11th January, 2014 at Hotel ITC Sonar Bangla, together with the first ever Jewellery Fashion Show in Kolkata – “Style Statement,” and was attended by popular Bollywood actress Raima Sen.
The Kolkata Jewellery & Gem Fair, expected to become a permanent feature in the international calendar of Gem & Jewelry Fairs in the month of January, will no doubt, put the city of Kolkata on the world map, not only as the perfect destination of handcrafted gold jewellery, but also as the capital of the best jewellery creations in the world.