Valuable pieces of gems were found among the tools that early humans used around the time of the Balangoda Civilization , which is considered to be over 30,000 years old. The people of that era cherished these stones perhaps because of their beauty and used them for making necklaces and bangles for many years.

The iron civilization dawned on Sri Lanka suddenly , according to scholars .Probably the main reason for it would have been regular contacts with neighbouring continents from where technology quickly reached the island . A caste of jewellery makers were among the people of 18 casts who arrived in the country with Bhikkuni Sanghamittha . This undoubtedly would have contributed to the spread of the jewellery industry in Sri Lanka . These immigrants would have contributed to the development of the industry here for many generations until the present time . Even the story of the venerable Arahat Mahinda’s arrival in Anuradhapura describes that on the roadsides were sales outlets where gold , silver, pearls and gems were sold. The Paravi Sandeshaya says that ancient Galle was filled with shops selling gold,silver, pearls and gems.

Concerning valuable metals, Sri Lanka’s soil yields no gold . During the last century small pieces of gold were found in several rivers flowing towards the west . But such small quantities served no purpose, according to a report sent by tenant to London on the natural resources of Sri Lanka ,then a British colony. But the mahawansa states that lumps of gold were found in a plain off Anuradhapura. Silver has been found in a cave in a village named Ambatthakola towards the south of the town. King Dutugemunu had used these metals during the construction of the Maha Thupa . Legend says that the gold was found in Ranpathwila, a village named after this discovery. Due to the weight of the gold the wheels of the cart transporting the metal to the town had broken and the gold had to be transferred to other carts, according to legend.

In ancient times both males and females were interested in various kinds of adornments ,people of lower classes wore rings and bangles made of glass. These cheap adornments were sold to the villagers by traveling salesmen. The expensive ones were made of silver, gold, pearls and jewellery. Such earrings, bangles and anklets were gifted to officials and generals in appreciation of the services thay performed for the King. It is said that Parakramabahu I has sent as gifts valuable vessels and expensive clothing along with earrings , ornaments made of pearl and gold bangles to his generals who won battles in South India. He had also presented enemy leader Waluttarayar (Who was defeated by the King’s general Lankapura) with bangles and other adornments to win over defeated enemy and build a lasting friendship with him. Parakramabahu I also gave his own gem-studded adornments and a royal elephant to General Gokanna of Kalawapi and valuable earrings to his subordinates .

The beds in King Parakramabahu’s palace were made of gold and ivory. Reference is made to gold and silver mirrors among items donated to Buddhist Temple’s . The King’s palace was beautified with gold pieces hung all over the building and rang like bells.

In the 8th century King Mahinda II is said to have served Brahmins with milk in gold vessels. Ceremonial items used by persons of high-rank were made of gold and silver and studded with pearls and gems to show their different status. Sometimes the King donated his weight in gold to the Sangha and the poor.

Jugs, saucers, plates, pots, pans,basins, buckets,spoons and other such items in the Brazen Palace were all made of gold.

Unlike nowadays in ancient times gold was used not only for making jewellery and adornments but also for various other products. King Kassapa V in the 10th century had placed a copy of a Buddhist text (Dhammasangani)- written in gold leaves- on the pedestal of a temple which he had built. A gold statue had also been placed on this pedestal.

Sculpturing of statues in gold was a widespread industry in this country at that time. First the statue was made of wax after which it was fully covered with clay before burning it. After burning the hot wax was removed through a hole. This way the mould for the statue was turned out. And through the same hole molten gold was poured thus creating the statue. For its eyes blue sapphires were used after the sculpture was completed. In addition to making statues in gold ,statues were also made in bronze.

Legend says that the Tanthrimagay Raja Maha Vihara was constructed after burying a necklace made in the shape of a species of butterfly called Thanthini. King Dutugemunu had presented this necklace to his son Saliya and his wife Asokamala after he forgave them for marrying without his consent. The art of designing for adornments too goes back to ancient times. 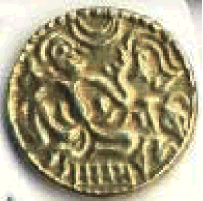 In addition to making ornaments and other items in gold , this metal had also been used for minting coins. King Aggabodhi I offered such gold items to Maha Thupa. Tha value of gold that King Udaya II spent is 1.3 million in Kahavanu- a currency used at that time.

The weight of a coin was 146.4 grains . In the 13th century , King Sena III had donated every Poya day 100 or 1000 kahavanu for house repairs and 40000 kahavanu for stones in the construction of the Abhayagiri Thupa. It is said that King Elara had donated 15000 kahavanu as compensation when his chariot knocked against a thupa, damaging 15 stones.

Even in this ancient gold industry ,proper standards were maintained then as now . There were traders who tested the value of gold by rubbing them on a stone called Nahasna Pahana. This makes it clear that the production of gold and silver items and minting coins as well as standardization was prevalent since ancient times.