The annual China Kunming Import and Export Commodities Fair, organized for the 19th successive year and held in parallel with the South Asian Countries Trade Fair for the 4th-successive year, was held between June 5 and 10, 2011, at the Kunming International Exhibition Center in Kunming,  a transportation hub, and capital city of southwest China’s Yunnan Province. A significant feature of this year’s South Asian Countries Trade Fair was that Sri Lanka was adopted as the theme country of the fair, and was also holding the rotating presidency of the China-South Asia Business Forum. In view of this a strong official delegation from Sri Lanka, led by the Prime Minister D.M. Jayaratne and the Minister of Industry and Commerce Rishad Bathiudeen, attended both the fair and the business forum.  The two fairs were officially opened in the evening of June 5, 2011, by the Chinese State Councillor Dai Bingguo. Apart from other foreign guests, the two foreign leaders who were present at the opening ceremony were the Prime Minister of Sri Lanka D.M.Jayaratne and the Laotian Deputy Prime Minister Somsavat Lengsavad. The opening ceremony was followed immediately by a colorful performance by Chinese artists and acrobats. 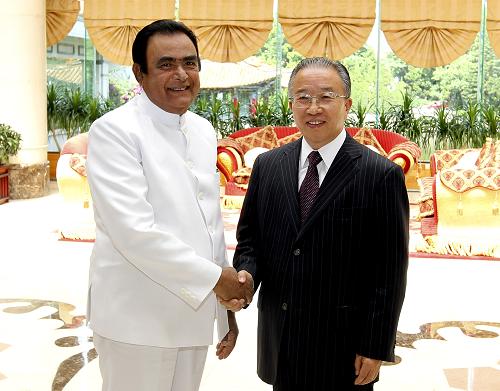 Councilor Dai Bingguo said that the relationship between China and Sri Lanka was deep and ancient, dating back to over 2,000 years. He said that both China and Sri Lanka were close friends, mutually trusting and supporting each other, and were partners in the same boat, sharing the same mutual concerns. He further said, that both China and Sri Lanka are facing the enormous task of development, and there were bright prospects for the two countries to enhance practical co-operation. Dai said, “China cherishes its traditional, friendly and co-operative ties with Sri Lanka, and is ready to make concerted efforts to reinforce traditional friendship, expand mutually beneficial co-operation, and inject new connotation and vitality into China-Sri Lanka comprehensive co-operative partnership. China is also willing to see Sri Lanka achieve rapid and prosperous development, as well as the rapid development of other developing countries.”

Prime Minister Jayaratne in his remarks said, that Sri Lanka appreciated China’s support for its economic and social development, as well as its support for safeguarding the sovereignty and territorial integrity of the country. He hailed the time-honored bilateral friendship between the two countries, that has withstood the test of time. He also said that China’s modernization drive had made enormous achievements and Sri Lanka welcomed the active role played by China in international as well as regional affairs.

The Prime Minister and his delegation, that included the Minister of Industry and Commerce, Rishad Bathiudeen and the Chairman of the Export Development Board, Mr. Janaka Ratnayake, had a busy schedule during their visit to Kunming.  After meeting with the State Councillor and attending the opening ceremony of the two fairs, on June 5, 2011, the delegation took part in the Sixth South Asia-China Business Forum whose rotating presidency is currently held by Sri Lanka. Inaugurating the business forum, Prime Minister Jayaratne said that fora of this nature should create opportunities to promote greater cross border investments, support the increase of South Asia exports to China, and serve as a channel to China-South Asia economic integration. The theme of this year’s forum, “Trade and Investment between China and South Asia” he said, was most appropriate and timely, in the background of ever increasing shared trust in political affairs and development of economic and trade corporation between China and South-Asian countries. He further said that the forum was an important mechanism established between Chinese and South Asian industrial and commercial circles, with a view of strengthening mutual co-operation and securing win-win results. He stressed that in that respect the theme selected for the forum was the most fitting and appropriate.

Elaborating further on the significance of the forum, Prime Minister Jayaratne said, “This event provides special meaning because on the one hand, South-Asia is strongly chasing the positive development of the South-Asian Free Trade Area. On the other hand, this cooperation will lay a solid foundation for the long-term plan of establishing the China-South Asia Free Trade Area. In this regard, this forum will further enhance the South Asia-China Strategic Partnership. It is my fervent wish that the South Asia-China Business Forum should be made a long-term program, as it provided the much needed confidence to both China and South Asia to work together towards regional prosperity and cooperation. We also have to take note of certain difficulties and problems that exist in South Asia-China trade and economic cooperation. Mutual understanding and support from the governments and business communities of both South-Asia and China are required to address these difficulties and problems.”

Prime Minister Jayaratne then proposed meaningful steps be taken by both sides, in order to speed up mutual co-operation and sort out existing problems, and whatever difficulties that may arise in the future. He said, “Firstly, governments of South-Asia and China should work out appropriate economic and trade policies, to further support and promote regional economic and trade cooperation.”

“Secondly, Chambers of Commerce and Business Communities of China and South Asia should strengthen and promote mutual understanding and trust. This should be done through holding seminars, business visits, and trade fairs, etc.

Speaking on China’s invaluable contribution to the positive development of the Sri Lankan economy, Prime Minister Jayaratne said, “The flagship projects, that have been recently launched in Sri Lanka, with the assistance of China, namely Norochcholai Coal-Powered Power Project, Hambantota Port, and Mattala Airport, would give a big boost to our economy.”

He further said, that among other outstanding donations by China to Sri Lanka, the Bandaranaike Memorial International conference Hall (BMICH), the Superior Courts Complex and the Performing Arts Theatre in Colombo, stand as visible symbols of the strong friendship between the two countries.”

While Prime Minister D.M. Jayaratne chaired the sessions of the Sixth South Asia-China Business Forum, Minister Rishad Bathiudeen served as moderator of the forum. On June 7, 2011, Prime Minister Jayaratne and Minister Rishad Bathiudeen together with other members of the delegation, visited all exhibition pavilions at the show. Sri Lanka’s participation in both fairs had been increasing during the past few years. In the year 2010, the number of exhibitors in the Sri Lanka pavilion was only 50, but this year it had doubled, with 100 exhibitors taking part. The exhibitors in the Sri Lanka pavilion were mainly sponsored by the Federation of Chambers of Commerce and Industry of Sri Lanka (FCCISL), which has an excellent track record in organization at the Kunming Trade Fair, having received the first prize for best organization at the 2007/2008 Kunming Fair. The Sri Lankan pavilion attracted huge crowds throughout the duration of the show, and the Gem & Jewelry section of the pavilion was quite popular, as revealed by the following photographs :-