Sothebys auction house will hold the auction of a renowned private collection, “The Vivien Leigh Collection,” at their London Bond Street Auction Center on Tuesday, 26th September, 2017, starting at 10.30 am. Vivien Leigh the legendary Hollywood actress of films like “Gone with the Wind, “A Streetcar Named Desire,” Anna Karenina” and “Caesar and Cleopatra” and wife of equally legendary Hollywood actor Sir Laurence Olivier, had during her lifetime put together a legendary collection comprising paintings, jewelry, couture, books from her private library, Hollywood memorabilia, furniture, objets d’art and other items celebrating all aspects of her life, from the pre-war years in London, to Hollywood and beyond, up to her death in 1967. Many pieces drawn from the city and country homes Vivien shared with her husband Laurence Olivier will give a new perspective on Vivien, from her appreciation of art and patronage of Modern British artists, to her passion for books and fondness for entertaining and interior design. 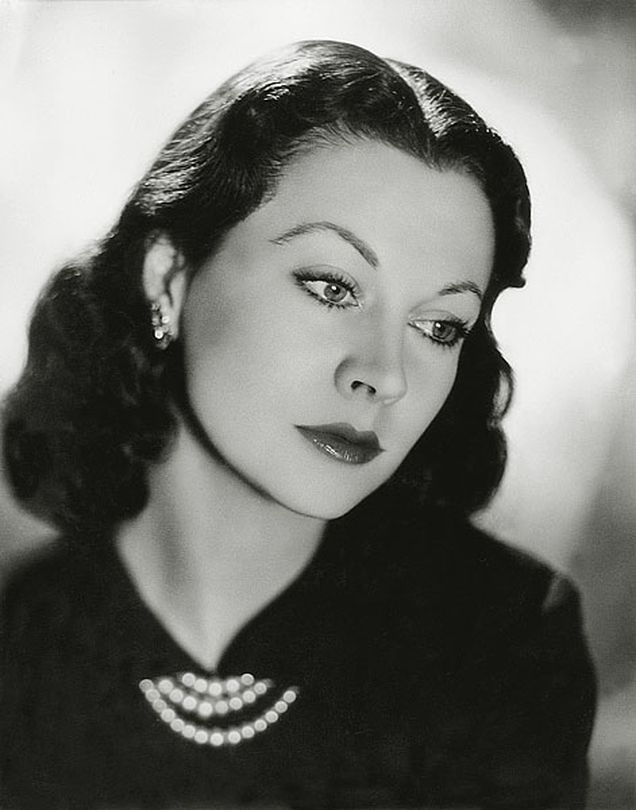 Vivien Leigh and Laurence Olivier were married on 31st August 1940, at San Ysidro Ranch in the Montecito foothills near Santa Barbara, shortly after midnight. Their wedding was the culmination of a passionate love affair conducted in secret over several years, that the couple had increasingly struggled to conceal as their fame grew. The two had first met admiring each other’s performances on the London stage, and were eventually cast as the romantic leads in Fire Over England in 1937, an historical film about the Spanish Armada. Later that year, Olivier was invited to play the titular role in a production of Hamlet at Elsinore castle in Denmark, where the original play was set, and helped Leigh secure the role of Ophelia. Though both were married at the time, the two had become increasingly close over the course of these productions, and Vivien and Larry agreed to confess their love for each other to their spouses after returning from Denmark. However, it was only after years of waiting for their divorces to be granted that Vivien and Larry were finally able to wed. Their marriage came at a particularly eventful period in their acting careers, both having starred in their most high-profile Hollywood roles to date: Vivien had won an Oscar® for her performance as Scarlett O’Hara in Gone with the Wind, and Larry had starred and been nominated for Best Actor as Heathcliff in Wuthering Heights in the previous year. Their partnership also extended twice more to onscreen roles around this time, starring as romantic leads in both the thriller 21 Days Together (1940) and the historical biopic That Hamilton Woman (1941). Together they enjoyed married life for nearly twenty years, supporting each other across America and the UK, through plays, films, health issues and a world war, and even when they finally separated in 1960, the two remained lifelong friends. 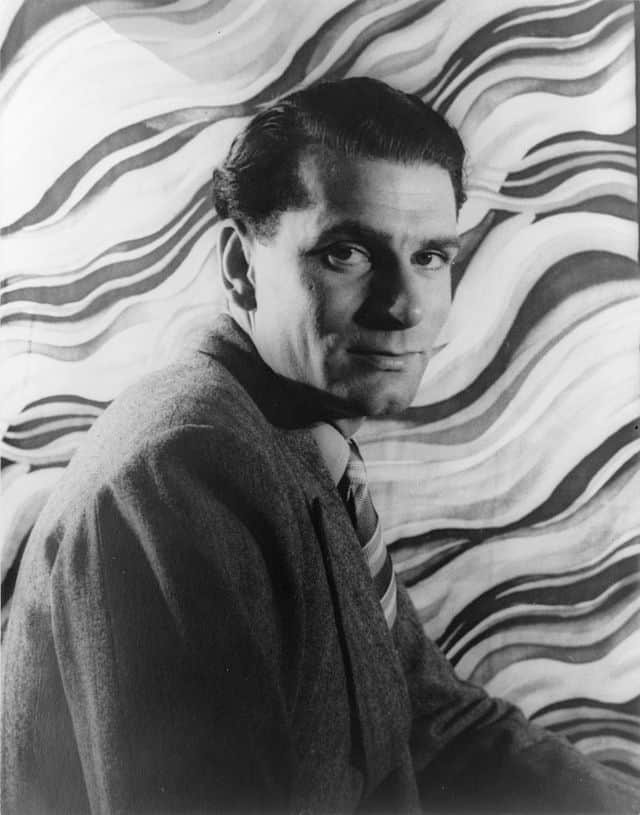 Some of the highlights of the jewelry in each category are as follows :- 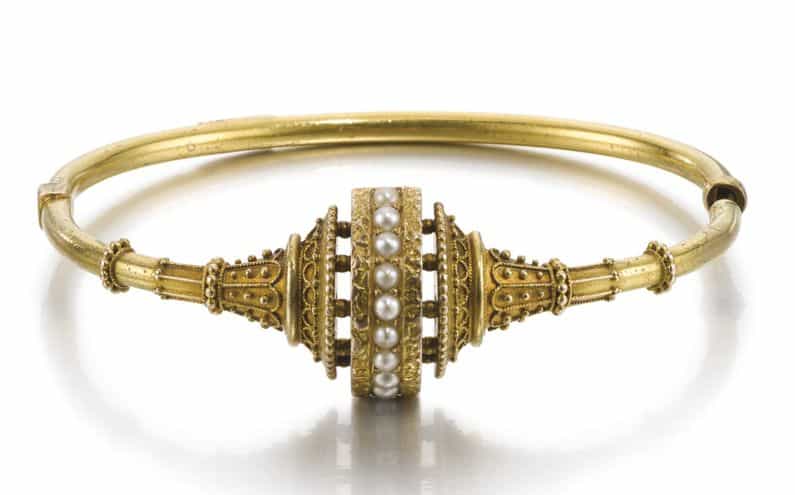 LOT 306 – ETRUSCAN REVIVAL STYLE BANGLE – with an estimate of GBP 100 – 150 (USD 132 – 198), is a 19th-century, antique, yellow-gold bangle bracelet, with an inner circumference of approximately 16 cm, of hinged design and the front decorated with bead and rope twist details and set with a line of seed pearls. Given the antique value of the piece and its celebrity provenance, the lot may fetch a much enhanced price than the estimated value at the Auction.

Significant bracelets in the collection are Lots 309 and 293.

Lot 309 titled simply as “BRACELET” with an estimate of GBP 600 – 800 (USD 793 – 1,057) is actually a stunning white metal sapphire and diamond bracelet, with a circumference of 14.5 cm. The centerpiece of the bracelet is a cluster set with an oval-cut blue sapphire, highlighted by a border of 12 circular-cut colorless diamonds. The openwork shoulders of the bracelet on either side are set with 7 circular-cut diamonds, equally spaced two paired diamonds and three single diamonds. The rear of the bracelet is linked with a secure clasp behind. The bracelet is said to be of late 19th-century or later origin. Depending on the period of origin the white metal could be either Silver (late-Victorian – 1880-1901), Platinum (Edwardian – 1901-1915) or white gold (Art Deco – 1915-1935). 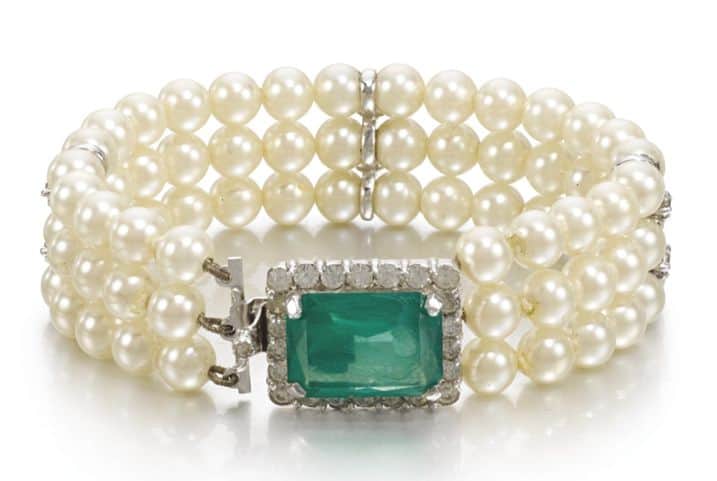 LOT 293 – THE ‘SHIP OF FOOLS’ BRACELET – gets its name from the 1965 film “Ship of Fools,” Vivien’s last on-screen performance as the glamorous but troubled divorcée Mary Treadwell, in which she is seen wearing the bracelet in many of the key scenes. Vivien was acclaimed, both by her co-stars and critics for her performance in the film, and was awarded the Étoile de Cristal for Best Foreign Actress.

The 17 cm circumference, bracelet designed in the 1960s is entirely made of simulants composed of three rows of simulant pearls spaced with colorless paste.The centerpiece of the bracelet is a green paste simulating an emerald within a frame of additional colorless paste stones, simulating diamonds. The bracelet, despite being made of simulants and being over 50 years old, is still in fairly good condition and is moderately priced at GBP 100 – 150 (USD 132 – 198) 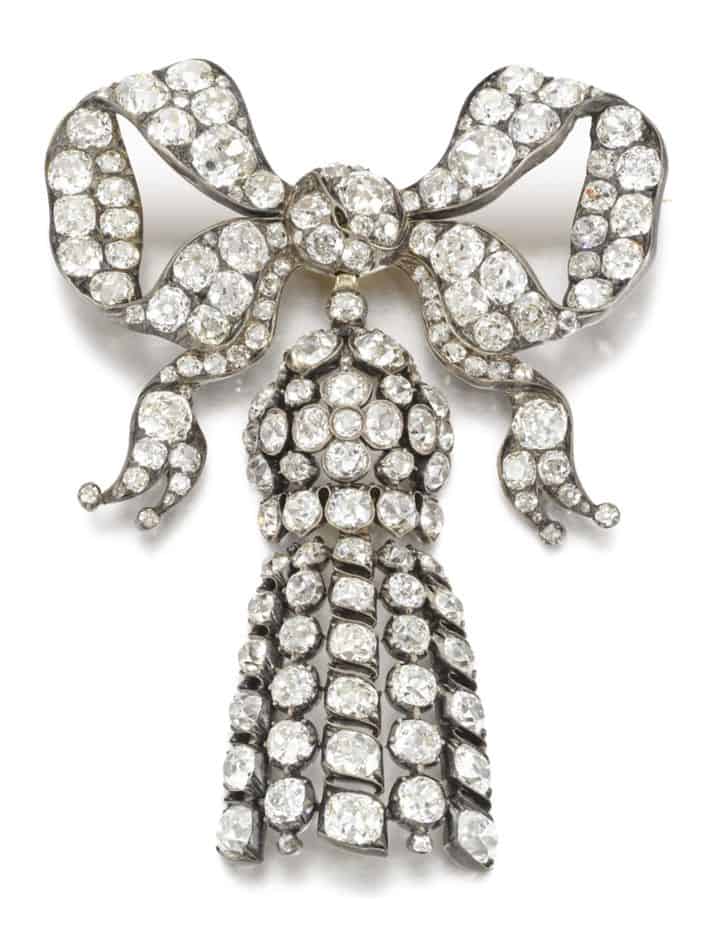 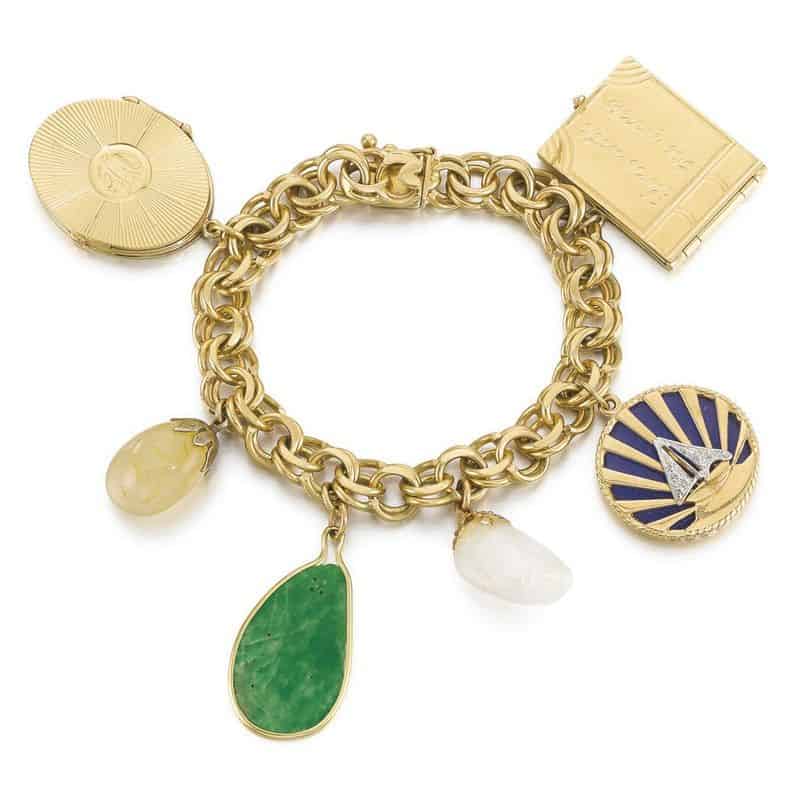 Lot 315 is a charm bracelet, titled, VIVIEN’S CHARM BRACELET, with an estimate of GBP 1,000 – 1,500 (USD 1,322 – 1,983. The 18.7 cm charm bracelet designed in the 1940s or later, is composed of a double curb link yellow gold chain set with six equally spaced charms. The charms include 1) An oval locket inscribed Lady Hamilton with the initials VL, containing a photograph of Vivien Leigh as Lady Hamilton and a portrait by George Romney. 2) A book inscribed Gone with the Wind, the pages inscribed Vivien Leigh and Scarlett O’Hara, with an engraved image of the character. 3) A round charm with a design of a boat against a sunset, the sky of blue chalcedony. 4) A jadeite pendant carved with a design of a bat. 5) A yellow regular oval-shaped chalcedony drop. 6) A white, some what irregular, elongated chalcedony drop.

Two of the charms in this highly personal bracelet commemorate some of the most memorable achievements of Vivien’s career. Her Oscar-winning performance in Gone with the Wind (1939) is commemorated by a charm designed as the novel by Margaret Mitchell from which the film was adapted, the interior pages revealing both her name and that of her character, Scarlett O’Hara. Vivien’s own copies of both the novel and the screenplay are also offered in this sale. Similarly, the oval locket contains a recreation by Vivien of a painting of the famous entertainer and muse Emma, Lady Hamilton by George Romney. Vivien starred as Lady Hamilton (1675 – 1815) in That Hamilton Woman (1941), opposite Larry, who played Vice Admiral Horatio Nelson. In pairing Vivien with her onscreen characters, both of these charms underline the deep connections she felt between herself and the women she brought to life on film. 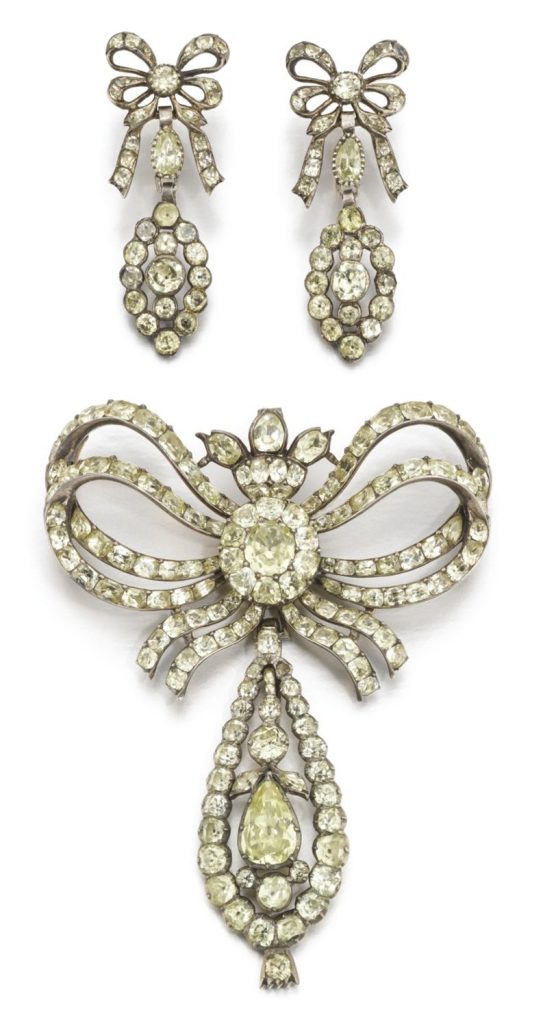 Significant Demi-parure in the collection include Lot 289 – THE CHRYSOBERYL DEMI-PARURE – with a pre-sale estimate of GBP 4,000 – 6,000 (USD 5,287 – 7,930). The demi-parure of 18th-century design consists of a Devant-de-Corsage and a pair of Pendant Earrings. The Devant-de-Corsage of dimensions 64 x 87 mm, is designed as a bow suspending a detachable pendant, set throughout with foil-backed circular-cut, cushion- and pear-shaped chrysoberyls.

The pair of pendant earrings of dimensions 47 mm each, are also of bow design suspending a detachable pendant and similarly set with foil-backed circular-cut, cushion- and pear-shaped chrysoberyls.

Highlight of the earrings in the collection is Lot 295 – VIVIEN’S NATURAL PEARL AND DIAMOND EARRINGS – with a pre-sale estimate of GBP 7,000 – 9,000 (USD 9,252 – 11,895). Each of the matching pair of earrings is set with a natural button pearl of approximate dimensions of 11.7 x 11.9 x 9.8 mm and 12.8 x 13.3 x 10.9 mm respectively, within a frame of brilliant-cut colorless diamonds. The earrings have secure screw fittings. The Gem & Pearl Laboratory report number 11344, dated 22nd May 2015, states that both pearls were found to be natural saltwater. The body colors of pearls are white with rose and green overtones and the larger pearl grayish-white with predominantly white overtones, both with good luster. The larger pearl is slightly irregular in shape. Estimated total weight of diamonds approximately 1.40 – 1.60 carats. 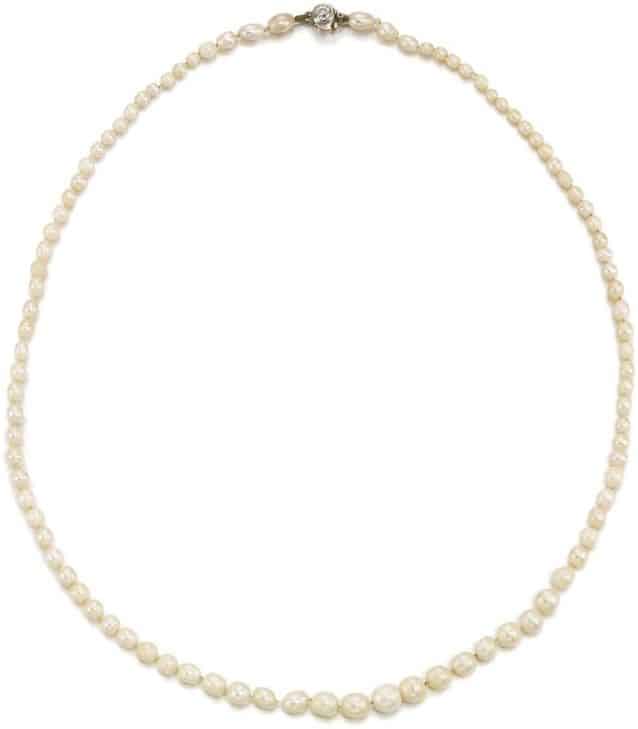 Top lot among the necklaces is Lot 294 – VIVIEN’S NATURAL PEARL AND DIAMOND NECKLACE – with a pre-sale estimate of GBP 800 – 1,200 (USD 1,057 – 1,586). The 45 cm (17.7 ins.) Princess length necklace is designed as a graduated line of natural saltwater pearls varying in diameter from 2.5 to 5.8 mm. The clasp behind is collet-set with a circular-cut diamond. The Gem & Pearl laboratory report no. 11342, dated 22nd May 2015, accompanying the lot states that the pearls are natural, saltwater, varying in diameter from approximately 2.5 to 5.8 mm. The Pearls are of oval shape, some of round shape. The Pearls are not very well matched. Body color of pearls white and cream, some with pink overtones. Lustre of pearls low to medium. 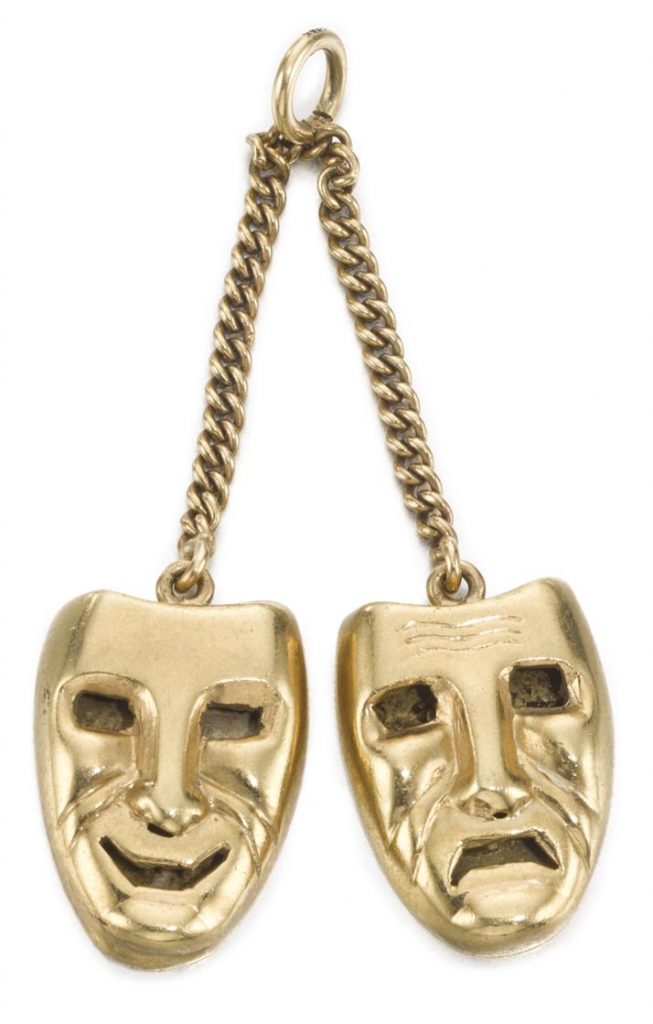 Lot 319 titled simply as PENDANT, with an estimate of only GBP 100 – 150 (USD 132 – 198) but surely with an enhanced provenance value, is a 9k yellow gold pendant of length 43 mm, suspending two pendants modeled as theatrical masks representing comedy and tragedy, from curb link chains and linked by a jump ring. 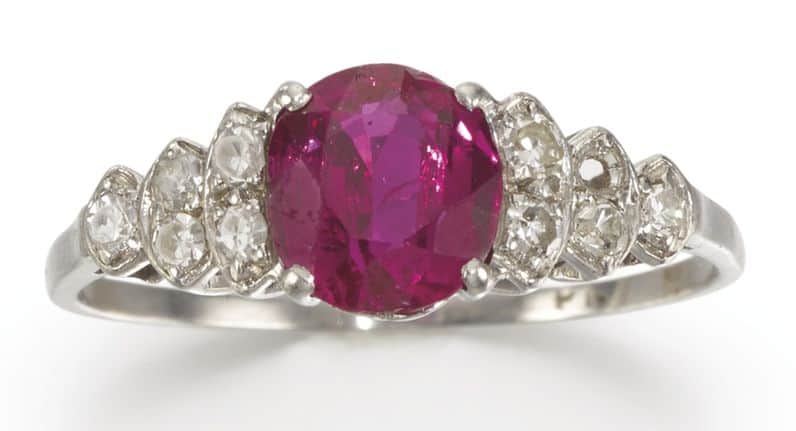 Top highlight among the rings is Lot 310, a ruby ring titled simply as RING, with an estimate of GBP 4,000 – 6,000 (USD 5,287 – 7,930). The size P ring is claw-set with an oval-cut, Burma natural ruby of approximate weight of 1.41 carats. The shoulders of the ring are set with single-cut colorless diamonds. GCS report no. 77113-75 accompanying the lot states that the ruby is of Burmese origin, with no indications of heat treatment. The Ruby is pinkish-red, transparent, with typical inclusions visible under magnification, some surface-reaching, with dimensions of approximately 7 x 6.5 x 4.3 mm and calculated to weigh approximately 1.41 carats. Estimated total weight of diamonds approximately 0.10 – 0.20 carats. 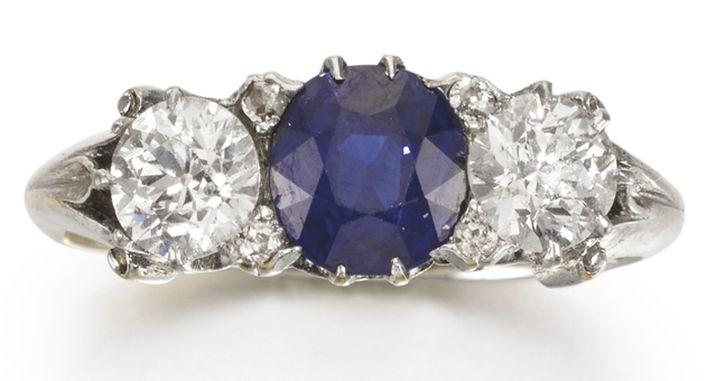 Lot 311 – titled WEST & SON RING, is a blue sapphire ring with an estimate of GBP 800 – 1,200 (USD 1,057 – 1,586). The Size N½ sapphire and diamond ring, signed West & Son is claw-set with a circular-cut blue sapphire between circular-cut diamond shoulders. According to Sotheby’s GCS verbal opinion obtained on the sapphire states that the sapphire is of Basaltic origin, with no indications of heat treatment, deep blue in color, transparent, with typical inclusions visible under magnification and some surface-reaching. Approximate dimensions of sapphire 6.1 x 5.6 x 3.5 mm and estimated weight approximately 0.86 carats. Estimated total weight of diamonds approximately 0.80 – 1.00 carats, estimated color-grade H-I color and average clarity grade SI. 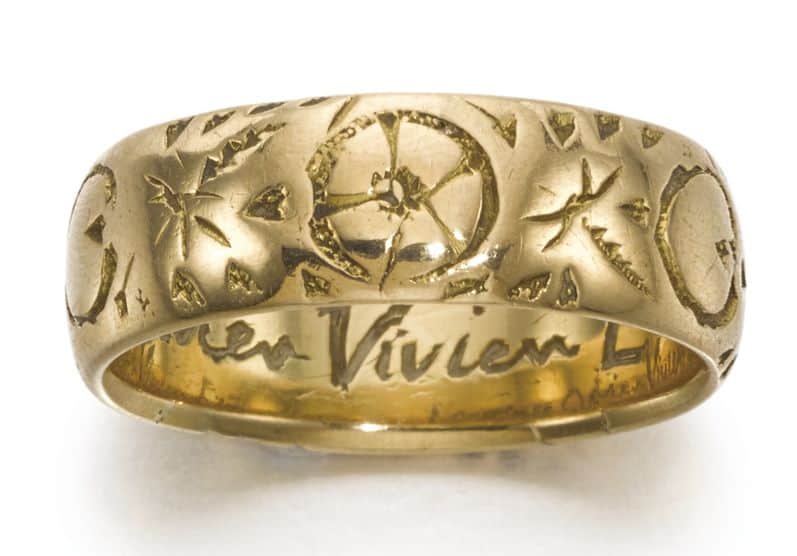 LOT 321 – THE ‘ETERNALLY’ RING – with an estimate of GBP 400 – 600 (USD 529 – 793) is another significant lot in the collection. The Size M½, yellow gold ring designed in the 1940s, with a width of 6.3 mm and weighing approximately 6.1 grams, is engraved on the exterior with floral decoration and on the interior with writing “Laurence Olivier Vivien Eternally” 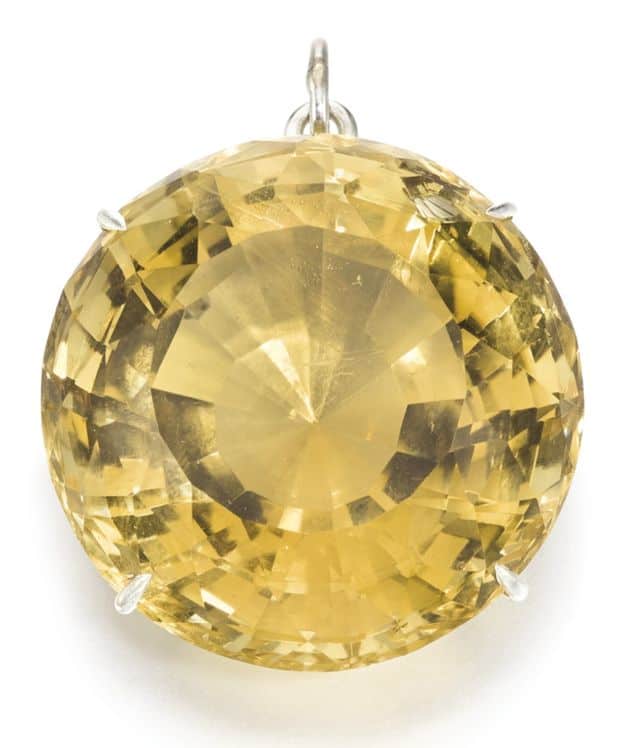 LOT 302 – UNMOUNTED CITRINE, MOUNTED ON A PENDANT BY SOTHEBY’S

An unmounted Citrine is also part of Vivien Leigh’s Collection. Citrine was Vivien’s birthstone. The circular-cut citrine weighing 144 carats with approximate dimensions of 34 x 34 x 23 mm was mounted as a pendant by Sotheby’s in anticipation of the September 26, 2017 auction of The Vivien Leigh Collection. An estimate of GBP 300 – 500 (USD 397 – 661) is placed on the lot assigned Lot No. 302.