The British Auction House Woolley & Wallis has announced the sale of an extremely rare, natural, near-spherical, nacreous, saltwater pearl at its Jewelry Auctions coming up at its Salisbury Salerooms on May 1st, 2014. The pearl with a shortest and longest diameter of 16.51 mm and 17.44 mm respectively, has a weight of 33.147 carats, equivalent to 132.59 grains. The pearl is without any doubt the largest, natural, near-spherical, saltwater, nacreous pearl to appear at a public auction, and perhaps one of the largest spherical/near-spherical saltwater pearls in existence.

The largest near-spherical, nacreous pearl to appear at an auction is the unnamed 60.36-carat (241.44 grains), natural nacreous pearl that appeared at Christie’s Contemporary Jewelry & Watches Sale 7664 at Dubai on April 29, 2008, and sold for a whopping US$713,000. However, this pearl was a freshwater pearl and not a saltwater pearl as the pearl appearing at the Wooley & Wallis auctions.

Other historic spherical/near-spherical saltwater pearls whose existence were reported in the collection of royal jewels belonging to Mughal emperor Aurangzeb – the last of the great Mughal emperors of the Mughal classic period, who ruled from 1658 to 1707 – by Jean-Baptiste Tavernier, who was given the rare privilege of examining these jewels on November 10, 1665, are :-

1) A round pearl of great perfection, but a little flat on one side (near-spherical), weighing 49 carats (196 grains) sent as a gift by Shah Abbas II, the King of Persia, to the great Mughal Emperor Aurangzeb.
2) A perfectly spherical white pearl, perfect in every respect, with excellent luster, orient, surface quality and overtones, weighing 32 carats (128 grains). According to Tavernier, this pearl was the only jewel purchased by Emperor Aurangzeb.
3) A spherical pearl of perfect form, whose sketch was indicated as Fig 5, in Tavernier’s book, Le Six Voyages de J. B. Tavernier- The Six Voyages of J. B. Tavernier, published in 1676, and whose weight was estimated by G.F.Kunz to be around 110 grains. According to Tavernier, this pearl was the largest perfectly spherical pearl he had ever seen. He further stated that a matching pearl for it was never found, and for that reason it was kept with the unmounted jewels.

The present whereabouts of the above historic pearls mentioned by Jean Baptiste Tavernier are not known.

The above statistics clearly bring out the fact about the extreme scarcity of perfectly spherical pearls, be it saltwater or freshwater. To find a natural pearl, whatever be its shape, is an extreme rarity. This fact coupled with the observation that most natural pearls are usually baroque/irregular in shape, shows that the occurrence of a regular shaped large pearl such as spherical or near-spherical is an extremely rare event in nature. This explains the staggering prices fetched by such pearls whenever one of them hits the auction block, such as US$713,000 fetched by the 60.36-carat, natural, near-spherical, freshwater pearl that appeared at Christie’s sale in Dubai, on April 29, 2008; and the staggering £1.6 million fetched by a matching pair of drop-shaped pearls weighing 34.51 carats and 33.24 carats at a Woolley & Wallis auction on April 26, 2012.

The pearl is accompanied by two lab reports, one bearing number 09623 from The Gem and Pearl Laboratory of London, dated 21st January 2014 stating that the pearl measures 16.5 – 17.4mm, weighs 33.15cts and is a natural saltwater pearl. 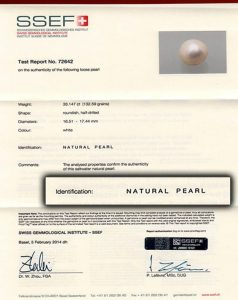 The second report bearing number 72642 from SSEF, Switzerland, dated 5th February 2014 states that the pearl weighs 33.147cts (132.59 grains), measures 16.51 x 17.44mm, and is roundish, half-drilled, the colour of the pearl is white and certifies that the pearl is a natural saltwater pearl. An appendix letter attached to the report states :-
The natural pearl described in Test Report No 72642 from the Swiss Gemmological Institute SSEF possesses extraordinary characteristics and merits a special mention and appreciation.
The described natural pearl exhibits an impressive size and weight of 33.147cts (132.59 grains), combined with an attractive roundish shape and smooth pearl lustre. The pearl shows an attractive white colour with weak rosé and green overtones, poetically also referred to as the ‘orient of pearls’. Such overtones are due to an iridescence effect caused on the surface of pearls and greatly contribute to their beauty.
The combination of well-balanced trace elements found in this pearl is characteristic for a saltwater pearl. A natural pearl of such a large size and quality is very rare and exceptional.

Wooly & Wallis have placed a moderate estimate of US$200,000-400,000 on this extremely rare natural, saltwater, near-spherical, white, nacreous pearl. However, going by the performance of such natural pearls at public auctions, it will not be surprising if there is a repetition of the performance of the Woolley & Wallis April 26, 2012 auction of the matching pair of drop-shaped natural pearls, and the pearl registering a price of over a million US dollars.