Galatea automated systems developed by Israeli entrpreneurs to detect defects and inclusions in rough diamonds, was purchased by Sarine Technologies in 2008, which further perfected the technology from prototype to commercial reality by launching the Galaxy™ system in 2009. The Galaxy™ 1000 is the world’s leading fully automated system for detection and mapping of internal features in rough diamonds, and has the ability to scan most rough diamonds and accurately map all inclusions in the diamond regardless of their type, size, and location. The scanning process is performed automatically at high speed without the need for any “windows” being opened or other pre-processing of the rough stone. The system operates virtually independent of the operator’s skill and it is designed to directly output its data to the Advisor™ – Sarine’s rough planning software that enables the true optimization of the value of the polished stone, based on the 4Cs of the diamond including for the first time ever, the Clarity. The Galaxy™ system was followed by other advanced models such as Galaxy™ XL, the Galaxy™ Ultra and the Solaris™. Sarine’s Galatea systems all create a highly accurate 3D map of the internal inclusions within a rough diamond. This unique technology has been established as the world’s one and only automated solution for inclusion mapping, and has been adopted by leading manufacturing plants worldwide. 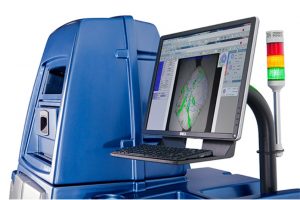 It is in the above context that the Israeli diamond sector’s modern manufacturing center has installed the Galatea system, the state-of-the-art manufacturing system developed by Sarine technologies. The system, which is now at the disposal of Israeli diamond manufacturers, maps out and diagnoses internal defects in rough diamonds of all sizes automatically, no matter where the defect is located within the stone.

The diamond manufacturing center has fixed the hours between 8.30-10.00 am every day for accepting diamonds for identification of defects by Sarine, which will make every effort to return the diamonds accompanied by the results, to the diamantaires by 5.00 pm on the same day.

The work on diamonds will be carried out at the manufacturing center’s modern facilities installed with the state-of-the-art equipment. Sarine’s facility are gaining popularity among the diamantaires to the extent that all polishing machines at the center are working at full capacity, due to the rapidly increasing demand, necessitating the creation of a waiting list to cope with the demand.

All diamantaires are invited to use the new Sarine’s facility, with a 15% discount given to those firms who submit stones for polishing. Sarine will also present a briefing to diamantaires on identifying defects in stones with all diamond company representatives invited.