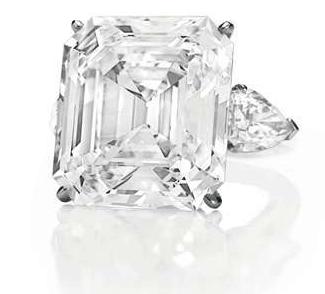 A large and rare diamond named the Annenberg Diamond is to be sold on October 21st in a magnificent jewels sale in New York.

The diamond a 32-carat emerald cut internally flawless set in a ring is expected to fetch between US$3 to 5 million.

The ring which was designed by the renowned jeweler David Webb for the Leonore Annenberg collection was also set with two pear shaped diamonds on either side weighing 1.5 and 1.61 carats respectively.

The diamond is expected to be showcased in London, Geneva, Hong Kong and Los Angeles. Christie’s is also expected to put up the entire magnificent jewels sale on display at the Christie’s Rockefeller Center Galleries from October 16th to 20th.

Christie’s had worldwide sales amounting to US$1.8 billion during the first half of 2009.

Leonore Annenberg (1918-2009) was the head of protocol during the presidency of Ronald Regan. She was the president of the Annenberg foundation after the death of her husband. The main purpose of the non-profit foundation was to fund education and arts.