Timed to coincide with the 40th-anniversary celebrations of Sotheby’s operations in Asia, the auction house announced in August 2013, the sale of two extremely rare diamonds at its Magnificent Jewels and Jadeite Autumn Sale 2013, coming up on October 7, 2013, at the Hong Kong Convention and Exhibition Center. One of these diamonds bearing Lot No. 1925 is the 7.59-carat Premier Blue diamond, an extremely rare round brilliant-cut, internally flawless, fancy vivid blue diamond set as the centerpiece of a platinum ring, surrounded by a row of brilliant-cut pink diamonds totaling 1.70 carats and the shoulders set with round brilliant-cut white diamonds. The Premier Blue diamond ring is expected to fetch around US$ 19 million and hopefully break the existing per carat price record for a fancy vivid blue diamond set by Sotheby’s at the same venue in October 2011. 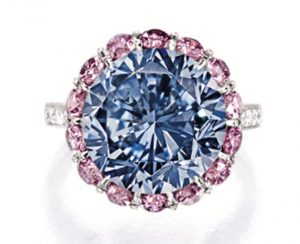 The other diamond bearing Lot No. 1932 is described as a spectacular oval diamond of supreme importance. This diamond is an unmounted oval brilliant-cut, D-color, flawless (FL) diamond weighing 118.28 carats. The oval brilliant-cut diamond was cut from a 299-carat rough diamond discovered from a South African diamond mine in 2011. The remarkable Type IIa diamond having the size of an egg is expected to sell between US$ 28-35 million, and would be the highest price ever paid for a white diamond at an auction, exceeding the record price fetched by the 101.73-carat, D-color, flawless ” Winston Legacy” that sold for US$ 26.7 million at a Christie’s Geneva auction in May 2013. Type IIa diamonds that are chemically pure and structurally perfect are absolutely colorless, and are also known as “top color” diamonds, variously described in superlatives such as “whiter than white,” “brighter than bright,” “purest of the pure,” “diamonds of the purest water” etc. Such diamonds constitute only about 1-2% of all naturally occurring diamonds, and are quite scarce. The successful bidder for this diamond will be given the naming rights to the stone.
Given the two top lots included in the sale, the Sotheby’s Magnificent Jewels and Jadeite Autumn Sale 2013, at the Hong Kong Convention and Exhibition Center, on October 7, 2013, would undoubtedly set many world records and promises to be a successful sale both in terms of lots and the total turnover.