In a Press Release issued on February 18, 2015, The Swiss Gemological Institute (SSEF), one of the world’s most respected gem research, education and grading institutions, announced the inauguration of a state-of-the-art laboratory in Basel, more than doubling the size of its previous facility and enabling a massive expansion of the services it has provided the gemstone, jewelry, and watch industries for more than 40 years.

The 720 sq-metre new home, located within eyesight of Basel’s main railway station, is a significant upgrade from the 300 sq-metre laboratory that the organization had occupied since 1994. Customized to facilitate the growth of SSEF’s diamond, colored gemstone and pearl grading and testing divisions, it also is designed to keep the organization at the forefront of gemological research, while at the same time expanding the educational services it provides the Swiss, European and international gem communities.

The inauguration ceremony, which took place February 12, 2015, gathered at the new facility a select representation of the Swiss gem, jewelry and watch industries, as well as industry leaders who had travelled in from abroad.

Greeting the guests, SSEF’s Director, Dr. Michael Krzemnicki described the organization’s transformation from a compact but highly respected Swiss laboratory into one of the World’s leading gemological authorities, with a team of 25 specialists. “When I started working at SSEF more than 16 years ago, we were a team of five staff members, working in a rather small apartment in the center of Basel,” he recalled. “The atmosphere was quite family style, but also fascinating for me as a mineralogist, as we were testing highly prestigious gems and jewelry for the trade and auction houses, due to the international reputation of our expertise.”

Dr. Krzemnicki paid tribute to his predecessors, George Bosshart, who served as SSEF director from 1974 to 1990, and Prof. Henry A. Hanni, who was director from 1990 to 2009 and who was present at the ceremony.

In his address, Marc-Alain Christen, the President of the SSEF Board, traced the growth of the organization from a laboratory that focussed on the local market into one operating internationally. “Over the years the range of clients became strongly globalised,” he said. “Frequent on-site testing in Hong Kong, Bangkok and Paris by SSEF specialists, as well as efficient and secure transportation of valuable items from all over the world to Basel, have greatly contributed to the internationalization of SSEF’s work.” 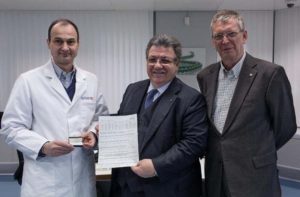 From its very early days, SSEF has served as touchstone for the gemological sciences. Not long after its establishment it was charged with the responsibility of being the custodian of the CIBJO Diamond C1 master set, and it has since served as the source of color master sets used by diamond grading laboratories around the world.

Present at the inauguration ceremony was CIBJO President Gaetano Cavalieri. “SSEF is a true gem in our trade, and an asset that needs to be valued and respected,” he said. “What better manner to do that than the way we are doing it today. This is a facility from which not only SSEF, but also the entire jewelry and gemstone business, will continue to draw strength for many year to come.”

SSEF’s role as a service provider at the very highest echelons of the business was confirmed by the presence at the inauguration ceremony of representatives of the World’s leading watch manufacturers, among them representatives of Swatch Group and the Richemont Group and also the auction houses, for whom SSEF has long provided expert grading services. 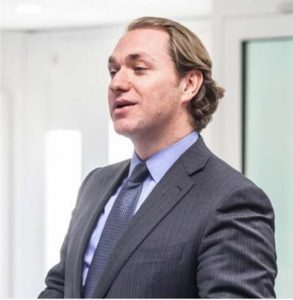 Addressing the gathering, Daniel Struyf of Christie’s recalled several of the famous auction pieces handled by his company, which first had carefully been analysed and graded by SSEF experts before going on public sale. Stefan Hemmerle, a renowned jewelry designer, spoke of the intense and collaborative relationship that he developed with SSEF, which served him and his company as an advisor in matters relating to gem identification and grading. 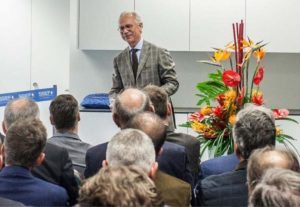 A highlight of the inaugural event was the public presentation of SSEF’s Automated Spectral Diamond Inspection (ASDI) system, which analyses and measures large quantities of melee diamonds, smaller than 3.8 mm in diameter, filtering out simulants, possible synthetic diamonds and possible HPHT-treated diamonds. As the participants watched, the machine sorted through a batch of more than 1,400 small diamonds, examining each one individually and accurately separating only the suspect stones. 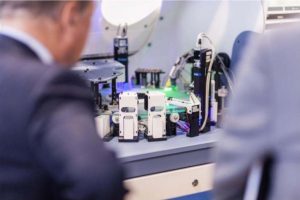 Participants at the inauguration ceremony watching the ASDI machine sorting through a batch of 1,400 small diamonds

Noting that he was long aware of ASDI’s technical prowess, but this was the first time he had seen it in action, was Simon Lawson, the head of De Beers’ Technology. Throughout his long collaboration with SSEF, Dr. Lawson said, “I have been constantly impressed with the lab’s commitment to developing practical solutions for the challenges that face our industry.” 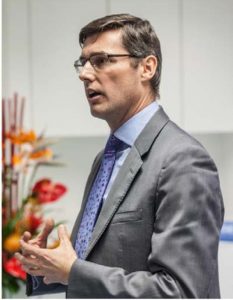 This commitment was summed up by by Dr. Krzemnicki during his address at the inauguration ceremony. “The trade is constantly challenged by new and difficult developments, and old values such as trust and confidence nowadays need a backup by an independent gemological report,” he said. “Thus it has been and will be our foremost mission to provide you with the best gemological services, as a worldwide leader in gemstone and pearl testing, based on our three main pillars – a highly experienced team of scientifically educated gemologists, state-of-the-art instrumentation, and continuous research, to be able to answer all challenges the market is facing today and tomorrow.”

The Swiss Gemological Institute, which is part of the Swiss Foundation for the Research of Gemstones (SSEF : Schweizerische Stiftung fur Edelstein-Forschung) , was founded by trade organizations in 1974 and works independently on a scientific basis. It is structured as a foundation under the aegis of Switzerland’s Federal Department of Home Affairs. The function of its laboratory is to analyse precious stones and issue test reports for diamonds, colored stones and pearls. Members of the SSEF laboratory are also engaged in research and education, either in collaboration with the University of Basel or with other gemological laboratories.