Sotheby’s Auction House after its first announcement in June 2018, on the sale of the most significant noble jewelry collections ever to come up for auction, christened “Royal Jewels from the Bourbon-Parma Family”, at their Geneva Sale, due to be held on 14th November 2018, have in another press release dated 22nd October, 2018, unveiled further unseen treasures from this incomparable royal jewelry collection. These include additional jewels once owned by the ill-fated Queen of France Marie Antoinette and other opulent pieces from the former Kings of France, the Austrian Imperial Family and the Dukes of Parma. 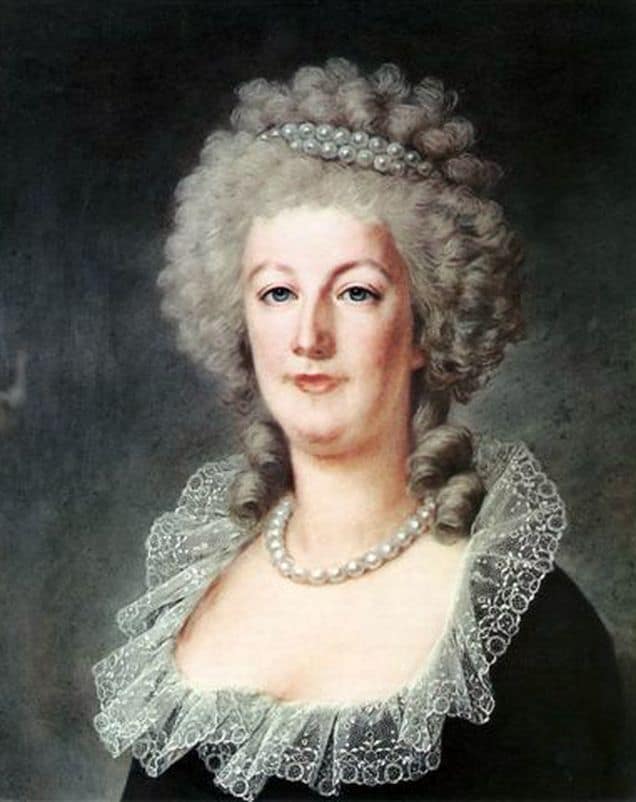 MARIE ANTOINETTE, THE ILL-FATED QUEEN OF FRANCE AT THE TUILERIES PALACE IN 1790

Marie Antoinette’s impressive collection of jewels and how they escaped confiscation during the tumultuous days of the French revolution, has a story as extraordinary as the jewels themselves. Her love of pearls and diamonds is well-known, to the extent that historians have ventured to say, that never in the course of history has the destiny of a queen been so closely associated with jewels than that of Marie Antoinette, citing Napoleon’s view, that the so-called “affair of the diamond necklace” – a scandal which tarnished the queen’s reputation in 1785 – was one of the contributory factors for the French Revolution. In March of 1791 as King Louis XVI, Queen Marie Antoinette and their children were preparing their escape from France, according to Marie Antoinette’s lady in waiting, Madame Campan, the queen spent an entire evening in the Tuileries Palace wrapping all of her diamonds, rubies and pearls in cotton and placing them in a wooden chest. The jewels were subsequently sent to Brussels, which was under the rule of the queen’s sister, Archduchess Marie-Christine and was home to Count Mercy Argentau, the former Austrian Ambassador to Paris, who was one of the only men who had earned the Queen’s trust. Count Mercy Argentau took delivery of the jewels and sent them to Vienna, for safe keeping under the custody of the Austrian Emperor, who was Marie Antoinette’s nephew. The collection included 10 jewels which belonged to Marie Antoinette. 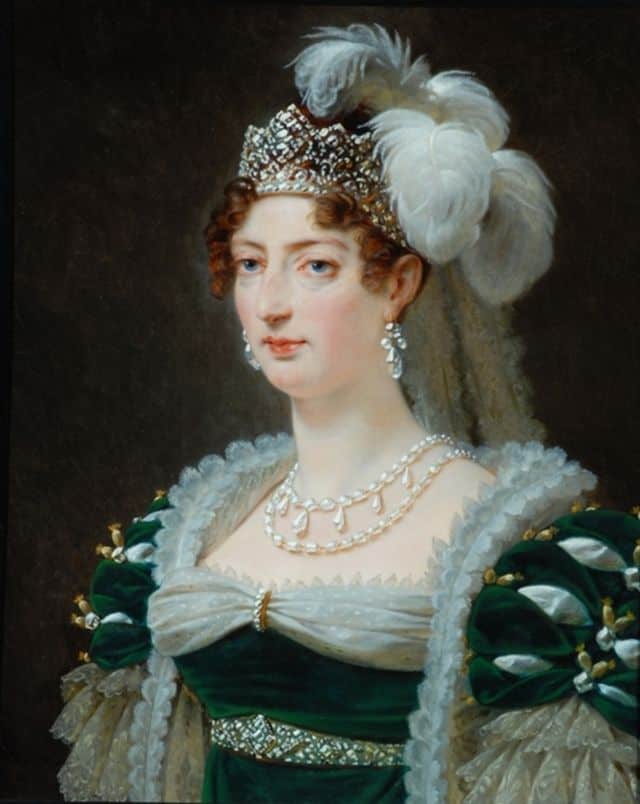 In 1792, the Royal family was arrested and imprisoned in the Temple Tower. King Louis XVI was executed by guillotine in January 1793, followed by his Queen, Marie Antoinette in October 1793. Their 10-year old son, Louis XVII, died in captivity and their only surviving child, Marie-Thérèse de France (1778-1851),“Madame Royale”, was released in December 1795, after three years of solitary confinement. Marie-Thérèse was sent to Austria after learning of the deaths of her mother and brother. After her arrival in Vienna in 1796, she was given her mother’s jewels by her cousin, the Holy Roman Emperor Francis II. Marie-Thérèse married her first cousin Louis Antoine, Duke of Angoulême, in 1799, who was the eldest son of the future King Charles X, her father’s younger brother. Marie-Thérèse, the Duchess of Angoulême, became the Dauphine of France, wife of heir to the throne of France Louis Antoine, when her father-in-law ascended the throne of France as King Charles X in 1824. She remained in France until August 2, 1830, when King Charles X abdicated the throne and the Chamber of Deputies appointed his cousin Louis Philippe as the King of France. Marie-Thérèse again went into exile in the UK with Charles X, her husband Louis Antoine, her young nephew duc de Bordeaux, his mother, the duchesse de Berry, and his sister Louise Marie Thérèse d’Artois, where they remained until 1833. Later they moved to Prague and finally to Austria, where they lived until their final days.

Having borne no children of her own, Marie-Thérèse de France bequeathed part of her jewelry collection to her niece and adopted daughter, Louise of France (1819–1864), Duchess of Parma and grand-daughter of Charles X, King of France (1757-1836), who in turn left them to her son, Robert I (1848-1907), the last ruling Duke of Parma. 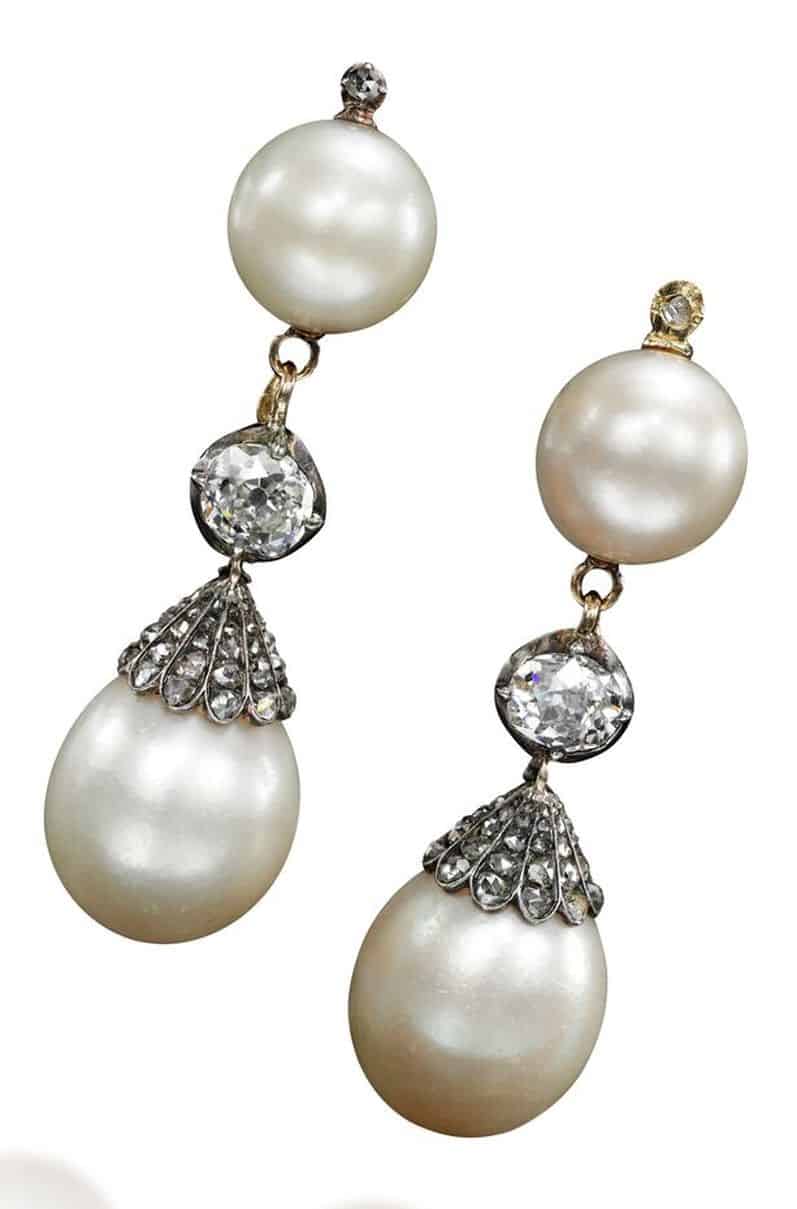 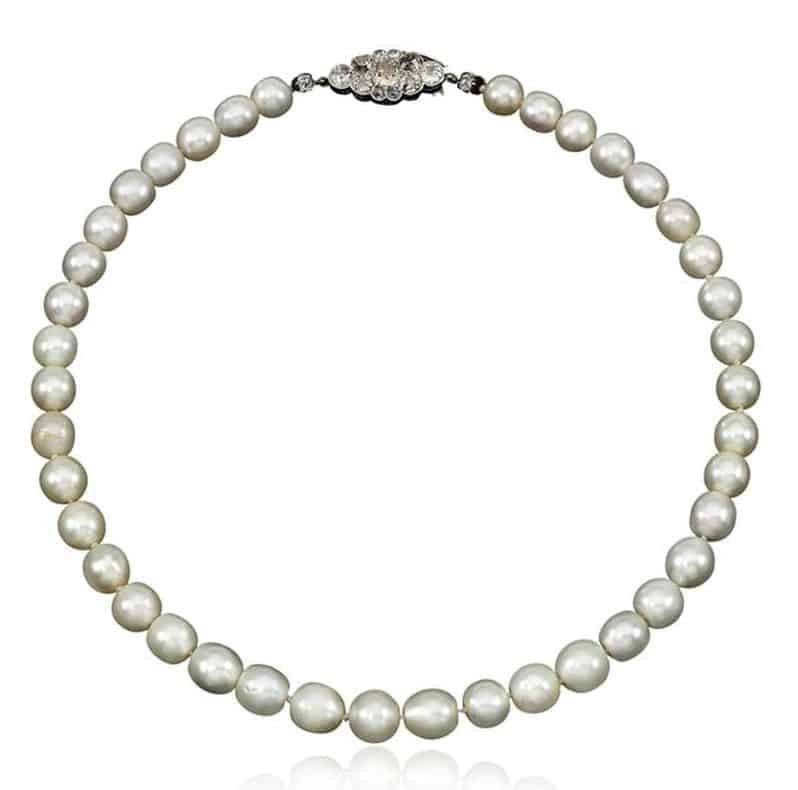 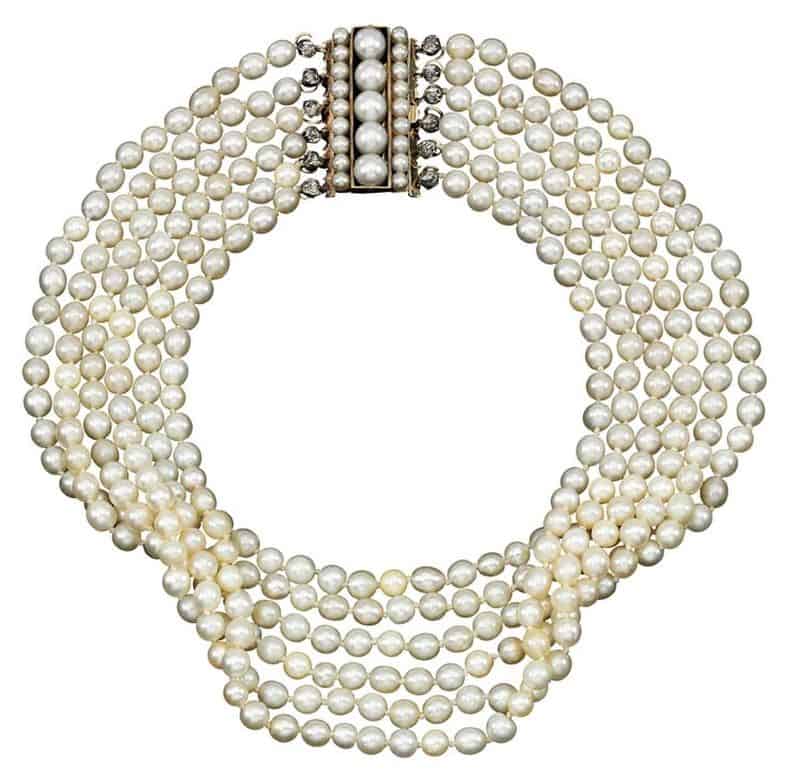 Another beautiful six-strand pearl necklace also provides a direct link to the iconic Queen of France. Its clasp – which remains unaltered until today – was part of her collection, and features five large and 18 smaller natural pearls. In Marie Antoinette’s day, it formed the clasp of a six-row natural pearl bracelet, one of a pair. The necklace was commissioned by later generations of the Bourbon Parma family and strung with cultured pearls and has an estimate of CHF 5,000 – 8,000 (US$ 5,000 – 8,000) placed on it.

The Royal Collection also includes five fascinating diamond jewels that can be traced back to Marie Antoinette. Among them is a stunning diamond brooch from the late 18th century, featuring a beautiful yellow diamond. The double ribbon bow was formerly part of Marie Antoinette’s collection, and it is thought that the yellow diamond pendant was added at a later date (Estimate CHF 50,000 – 80,000/US$ 50,000 – 80,000). 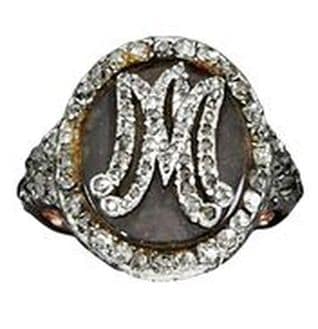 Another significant lot in terms of its historic value is a memento created by the Queen, a diamond ring bearing initials MA for Marie Antoinette and containing a lock of her hair providing a fascinatingly intimate link to the ill-fated Queen, with an estimate of CHF 8,000 -10,000 (US$ 8,000 – 10,000). 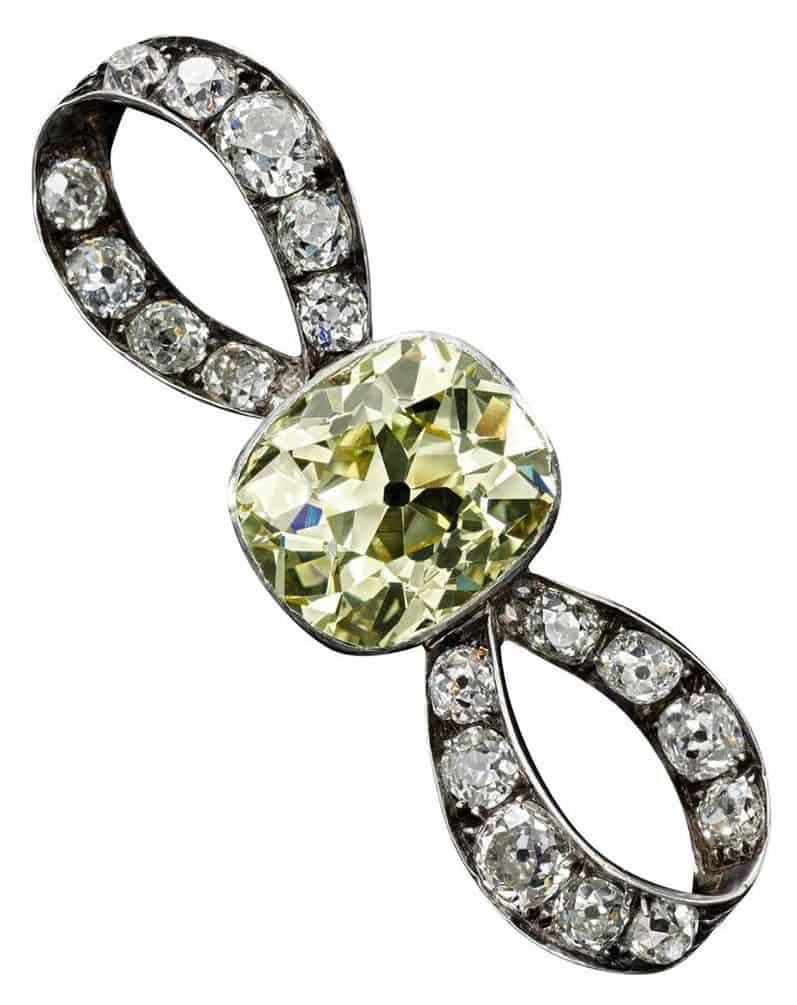 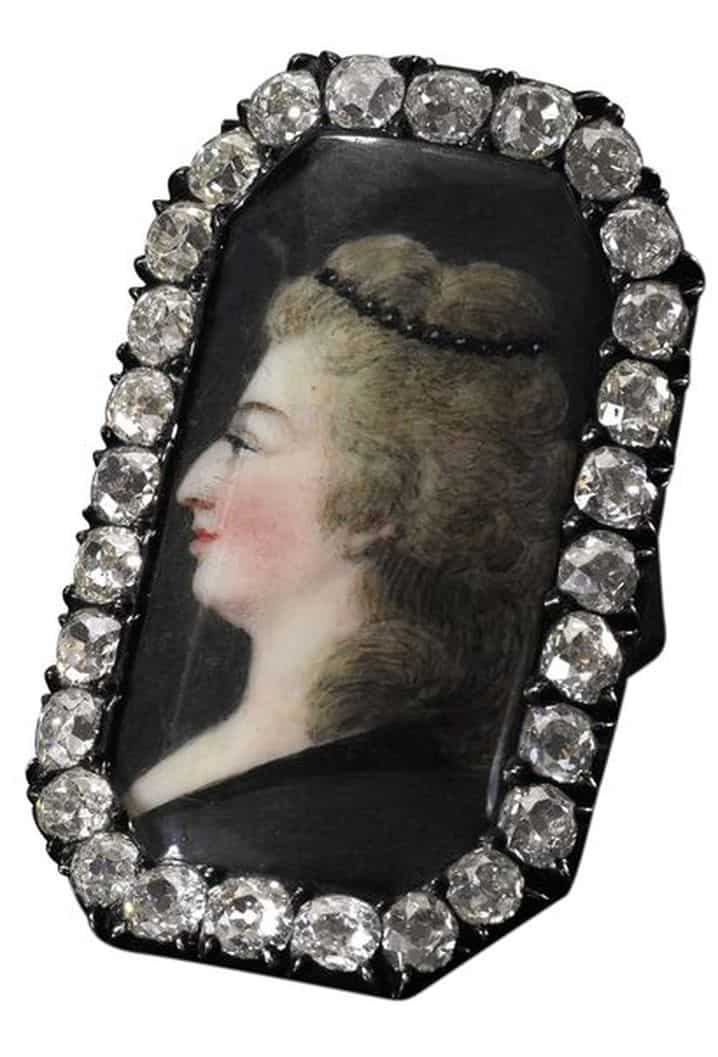 Another diamond lot from the collection is a diamond ring decorated with her portrait, made in the late 18th century, and passed down through generations of Marie Antoinette’s descendants. In her will, Marie Antoinette’s daughter, Marie Thérèse de France mentions that the portrait, which is set within a frame of pearls, is a likeness of her mother. (Estimate CHF 8,000 – 12,000 / US$ 8,000 – 12,000). 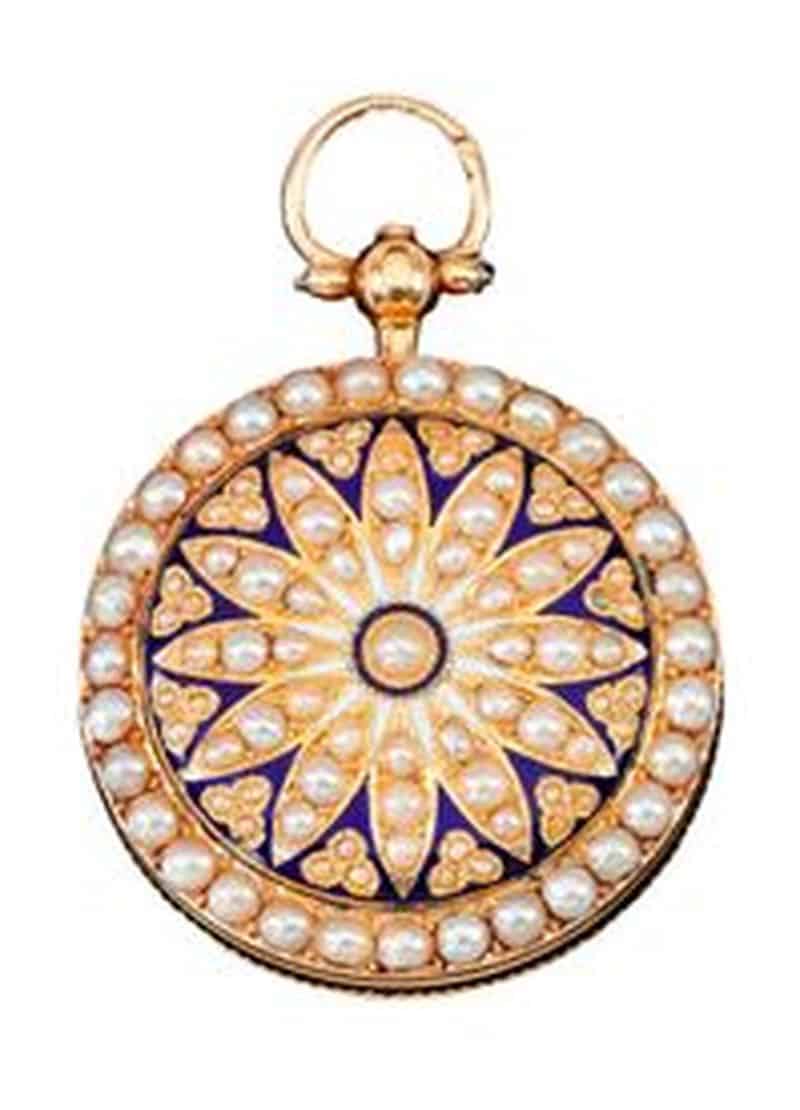 Marie Antoinette’s passion for Jewelry also extended to fine watches, as seen by this pocket watch, with an exquisitely crafted case, in blue enamel and encrusted with pearls. However, the the movement of the watch has been changed subsequently,but the inside of the case bears the initials M.A., along with three fleur de lys motifs (Estimate CHF 1,000 – 2,000 / US$ 1,000 -2,000).

JEWELS FROM THE FRENCH ROYAL FAMILY

The Bourbon-Parma jewelry collection is also highlighted by jewels that once belonged to King Charles X (1757-1836), the last King of France and last of the Bourbon rulers and his son, the Duke of Angoulême and their descendants. Resolutely conservative and accused by his own brother Louis XVI of being “plus royaliste que le roi” being “more royalist than the king,” Charles X revived a number of orders of chivalry which had been abolished during the French revolution and under Napoleon’s rule. 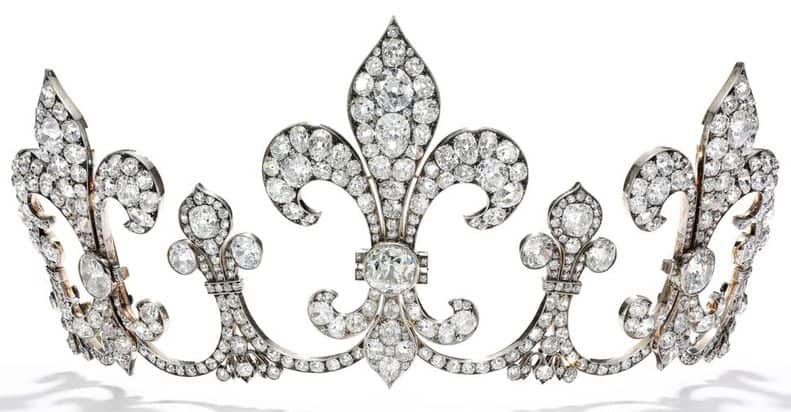 DIAMOND TIARA BY HUBNER, DESIGNED CIRCA 1912 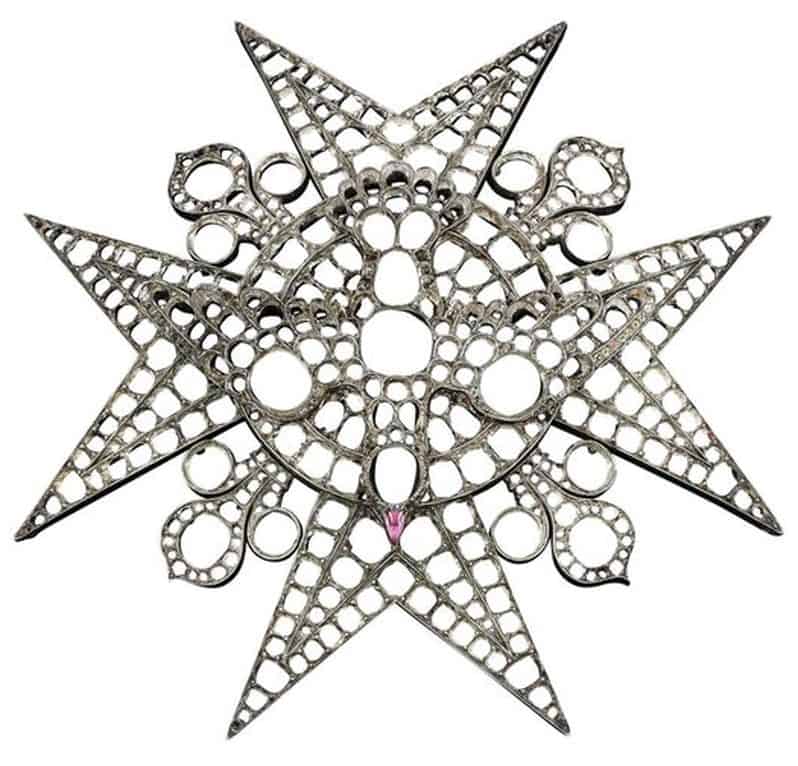 FRAME OF THE BADGE OF THE ROYAL ORDER OF HOLY SPIRIT, FROM WHICH DIAMONDS WERE OBTAINED TO CREATE MARIA ANNA’S TIARA, BY HUBNER

One of the highlights of the French Royal Jewels is a breathtaking diamond tiara with an estimate of CHF 340,000 – 540,000 (US$ 350,000 – 550,000) created circa 1912 for Archduchess Maria Anna of Austria (1882-1940) by the celebrated Vienna jeweler Hübner using diamonds obtained by dismantling an antique precious object, the badge of the Royal Order of the Holy Spirit, a French order of chivalry founded by King Henri III in 1578. The insignia originally owned by Charles X, Marie Antoinette’s brother-in-law, was eventually inherited by Robert I, the Duke of Parma (1848-1907). The fleur de lys motifs of this stunning tiara can be detached and worn separately as brooches. The frame of Charles X’s badge of the Royal Order of the Holy Spirit, which originally held the diamonds, has also remained in the family colection and will be offered in the auction estimated at CHF 150 – 300 (US$ 150 – 300). 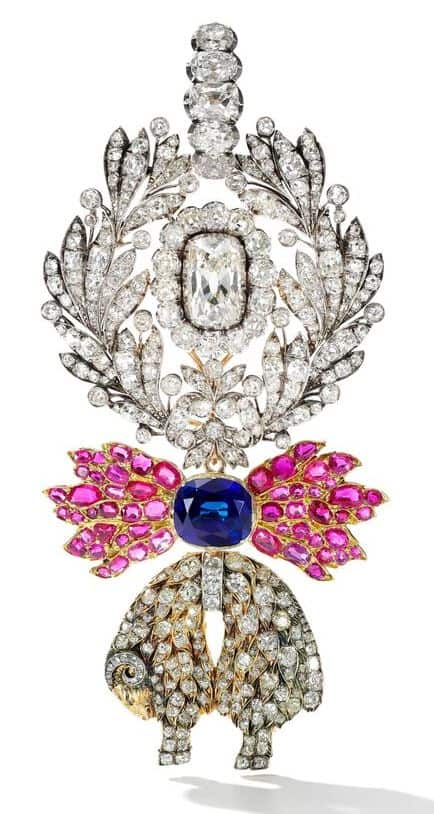 SAPPHIRE, RUBY AND DIAMOND JEWELED BADGE OF THE ORDER OF THE GOLDEN FLEECE

Another significant jewel from the French Royal Jewels is the jeweled badge of the Order of the Golden Fleece, of extraordinary workmanship and powerful symbolism, widely considered to be the most prestigious and exclusive order of chivalry in the world, that once belonged to Louis Antoine of Bourbon, Duke of Angoulême (1775-1844), who married Marie-Antoinette’s daughter, and his cousin, Marie-Thérèse de France. Louis Antoine is believed to have received the badge following his participation in the Spanish Expedition of 1823, thanks to which his cousin, Ferdinand of Bourbon was restored as absolute king of Spain.

The upper part of the badge of floral and foliate motif centering around a large white cushion-shaped diamond and a old-cut diamond surround, are made of leaves and florets similarly set with old-cut diamonds, terminating with a stack of five oval-shaped diamonds. The badge also features the traditional French royal symbol, the oriflame, represented by a central cushion-shaped sapphire, with flames on either side composed of rubies. The fleece of the ram forms the lower part of the jewel, also set with vari-cut diamonds mounted on yellow and white gold, with an estimate of CHF 300,000 – 390,000 (US$ 300,000 – 400,000). 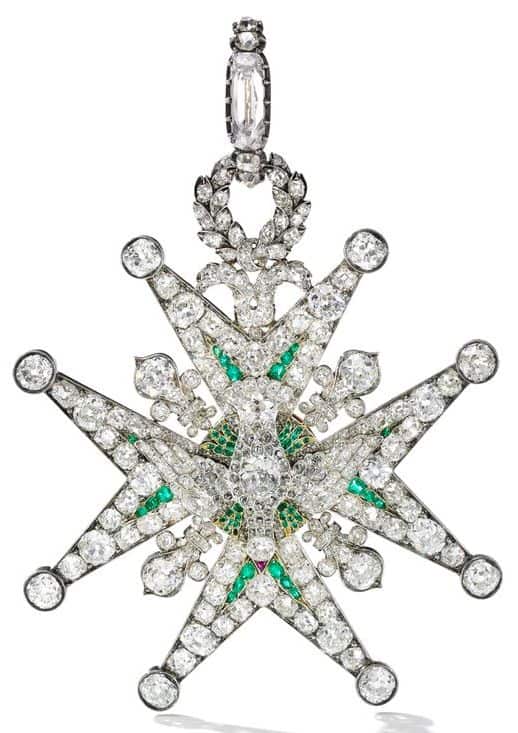 PLAQUE OF THE ROYAL ORDER OF THE HOLY SPIRIT

Another jewel of extraordinary provenance is the plaque of the Royal Order of the Holy Spirit set with diamonds and emeralds, which was awarded to Louis Antoine, Duke of Angoulême, before being passed down through the generations to Robert I, son of Charles III of Parma and Louise de France (Marie Antoinette’s great-nephew). The most prestigious French order of chivalry during its 252 years of existence (1578-1830), it was abolished during the French Revolution, and then revived by Charles X who restored the ceremonies of the Order. The loop at the top of the badge, adorned with baguette- and round-cut diamonds, was designed so that the order could be worn on a tie, without having to alter the jewel (Estimate CHF 100,000 – 150,000 / US$ 100,000 – 150,000).

The Collection of Royal Jewels to be offered for auction on 14th November, 2018, also include sumptuous jewels from a separate branch of this prestigious family passed down through the Bourbon Parma family from the Imperial Family of Austria. 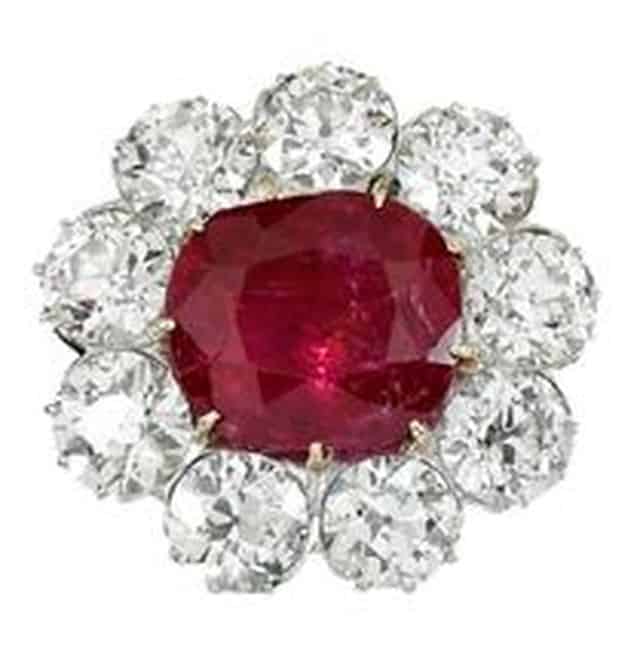 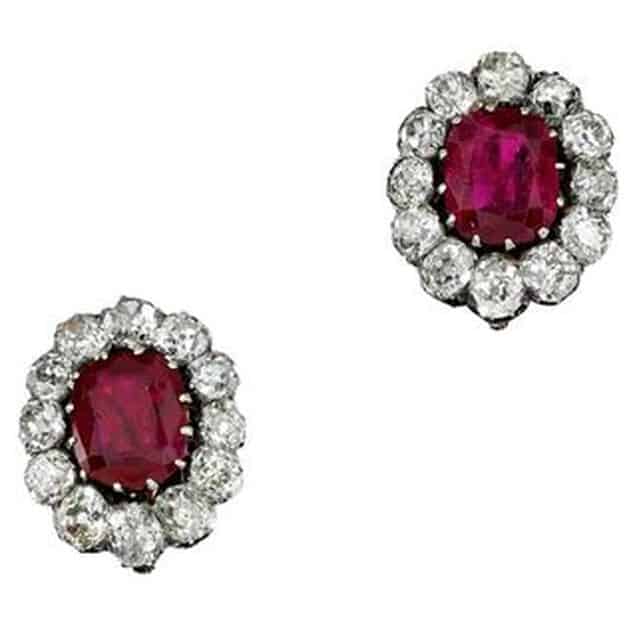 Among the highlights of this collection is beautiful Burmese ruby and diamond set, composed of a brooch and a pair of earrings, dating from the turn of the last century, conjuring up images of the glamour and elegance of the Austrian Court. Originally part of the collection of Queen Isabella II of Spain (1830-1904), the set was later purchased by Archduke and Archduchess Frédéric of Austria and inherited by their daughter, Maria Anna, Archduchess of Austria (1882-1940), who mentions it in her inventory of the family jewels. (Estimate CHF 150,000 – 250,000 / US$ 150,000 – 250,000). 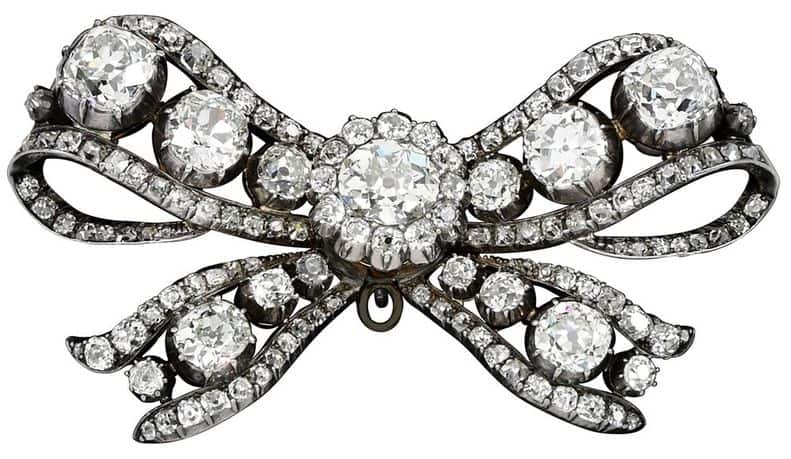 Another jewel of very significant historic provenance is a diamond bow brooch from the 18th century which originally belonged to Empress Marie Thérèse of Austria (1717-1780), Marie Antoinette’s mother, and later to Archduke Rainier of Austria (1827-1913) before passing down through the family to Maria Anna. Its,intricate design and workmanship illustrate the quality of jewels created for the royal family during the 18th century. (Estimate CHF 75,000 – 110,000 / US$75,000 – 110,000). 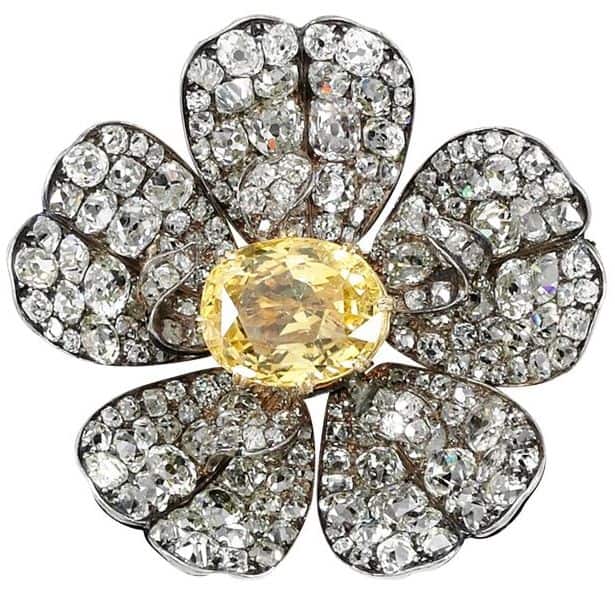 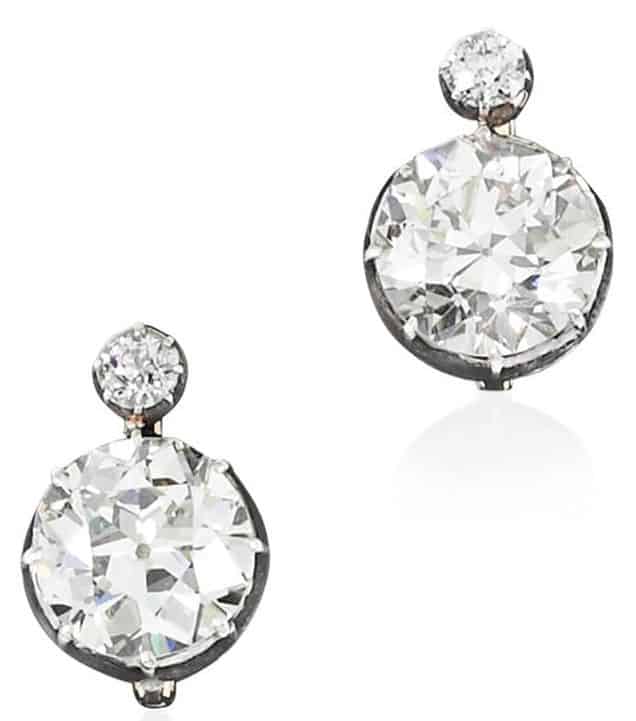 PAIR OF DIAMOND EARRINGS, CIRCA 1890