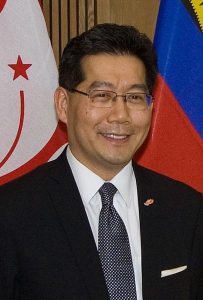 Addressing the gathering, Mr. Gregory So expressed his pleasure at being able to officiate at the opening ceremony of the first edition of the Hong Kong International Diamond, Gem & Pearl Show 2014. He reminded the audience that the Hong Kong International Jewellery Show, running into its 31st anniversary this year continues to rank among the world’s top three jewelry fair and exhibition events. Continuing further, he said, “It is encouraging to see that following years of resounding success and ever-increasing support from exhibitors and buyers, the show introduces a brand new concept of “two shows, two venues” this year, with the Hong Kong International Diamond, Gem & Pearl Show enticing buyers with jewellery raw materials at the AsiaWorld-Expo and the Hong Kong International Jewellery Show exhibiting finished jewellery products at the Hong Kong Convention and Exhibition Centre.”
Mr. So was full of praise for the skill and talents of the Hong Kong jewelry manufacturers, turning out exquisite gem-set jewelry incorporating elements of contemporary fashion. Their gem-setting skills and design capability, he said, are impeccable and competitive comparable with world-class European manufacturers. Hong Kong is today, one of the world’s premier trading hubs for jewellery. In the year 2013, Hong Kong exported precious jewellery exceeding HK$ 56 billion in value, a 7 per cent increase over 2012. He expressed his confidence that the new arrangement of “two shows, two venues” will bring about more business opportunities and further strengthen Hong Kong’s role as a major trading platform for the industry. In this connection, he pointed out that this year there is a record-breaking participation of over 3,800 exhibitors at both shows, representing a 14% increase over last year.
Mr. Gregory So, then went on to outline the reasons why he was confident that the jewelry show this time will be a tremendous success. First and foremost he said, Hong Kong was an event Capital, with its state-of-the-art convention and exhibition facilities, that contributed to the success of any major international event. Secondly, he said the country had an efficient transport network, and other infrastructure facilites that contributed to the success of such events. The Country’s strategic location as the gateway to Mainland China and other Asian markets; the business-friendly environment, and reliable professional services were among the other reasons enumerated by Mr. So that would contribute to the success of the show. According to Mr. So these are precisely the same reasons why Hong Kong had been selected as the “Best Business City in the World” by the Business Traveller Asia Pacific magazine for five consecutive years since 2009.
He further went on to state that readers of CEI Asia Pacific magazine also chose Hong Kong as the “Best City for MICE Events” in 2013. (MICE stands for Meetings, Incentive travels, Conventions and Exhibitions). He reiterated that continuous efforts will be made to promote Hong Kong as a premier MICE destination and encourage more MICE events to be staged here.
Mr Gregory So wound-up his speech by commending the excellent efforts of the Hong Kong Trade Development Council and the four co-organisers in developing such a prestigious show in Hong Kong and in promoting Hong Kong’s jewellery industry.
“I wish you all a most enjoyable and fruitful show,” he concluded.