Sotheby’s London Fine Jewel Sale held on July 11, 2013, realized an impressive total sale of GBP 2,431,438. The sale was held in two sessions. The first session commencing at 10.30 am offered Lots 1 – 157 for sale and during the second session commencing at 2.00 pm, Lot 158 – 310 were put up for sale. The auction featured exceptional jewels, including several fine examples of opals, that once belonged to the collection of Princess Ceril Birabongse of Siam (Thailand), a large collection of cufflinks from the 1920s and 1930s, and also attractive vanity and cigarette cases from the first-half of 20th-century. 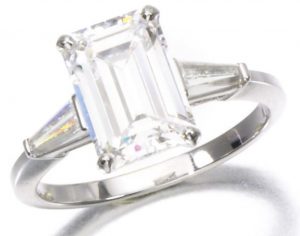 The second highest lot that fetched GBP 50,000 was Lot 239, a Gemset and Diamond Ring – Great Cat, by Cartier, the tiger’s body set with diamonds of yellow and near-colorless tints, the stripes set with black onyx, the eyes inset with pear-shaped emeralds. The price realized was 3.5 times the lower presale estimate of GBP 14,000 and almost three times the upper presale estimate of GBP 18,000. The third highest lot was Lot 304, a 1930s diamond ring, set with a 5.89-carat, circular-cut diamond between baguette-cut diamond shoulders, that was once the property of Princess Ceril Birabongse of Siam (Thailand). The presale estimate placed on the lot was GBP 10,000 – 15,000, but the lot sold for the enhanced price of GBP 40,000, which was four times the lower estimate and 2.6 times the upper estimate.

Lot 162 – A Diamond Necklace and Pair of Diamond Ear Studs