Popular online jewelry industry news magazine, www.jckonline.com in a news article dated February 28, 2014, under the headline – “Sotheby’s : Big Pink Didn’t Sell After All” has revealed the sensational news that the record-breaking sale of the 59.60-carat, internally flawless, fancy vivid pink, type IIa “Pink Star” aka the “Steinmetz Pink” diamond for a whopping $83,187,381 at Sotheby’s Geneva Magnificent Jewels Sale held on November 13, 2013, that was reported internationally and left the world awestruck, did not take place after all. 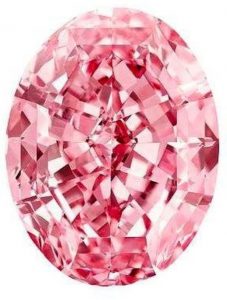 The “Pink Star” diamond whose sale was cancelled by Sotheby’s

The auction house said in an SEC filing, the stone is now in Sotheby’s inventory, the result of what it termed a “default” by buyer Isaac Wolf, who renamed the diamond “Pink Dream”. “Sotheby’s reversed the related auction commission revenues and recorded the Pink Star in inventory at its net realizable value of approximately $72 million,” the auction house said.
At that time, the sale set a new world record for the most expensive single jewel ever sold at an auction, that broke Sotheby’s own record set in November 2010 at another Geneva auction, when the 24.78-carat, fancy intense pink, modified emerald-cut, VVS2 clarity, pink diamond sold for US$ 46.2 million, and subsequently came to be known as the “Graff Pink” diamond.
In the year 2011, two similar record-breaking auction sales, one at Sotheby’s and the other at Christie’s, also ended up being cancelled.