In a press release dated 16th January, 2016, the Israeli Diamond Exchange has announced the visit of the President of Sierra Leone, Ernest Bai Koroma and his entourage to the exchange as part of an official visit to Israel, on Thursday, January 12, 2016. President Koroma was accompanied by several ministers of his government and a team from the Israeli Ministry of Foreign Affairs led by the Israeli Ambassador to Sierra Leone Paul Hirschson, and was welcomed by the IDE President Yoram Dvash and other members of the IDE board. The President and his entourage were hosted at a ceremony held in the Conference Room of the IDE, officiated by the Managing Director of IDE, Eli Avidar. 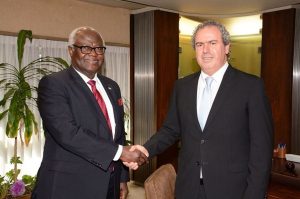 President Koroma being welcomed by President of IDE Yoram Dvash

Welcoming President Koroma and thanking him for honoring the IDE with a visit, the President of IDE, Yoram Dvash said, “Israel and Sierra Leone share a long tradition in the diamond sector. Sierra Leone was a key country in developing and promoting the Kimberley Process and we thank you for that. IDE members visiting Sierra Leone feel safe and that is not something that we take for granted. We invited you, President Koroma, to visit the rough diamond conference that we held in Israel in 2008, but you were unable to attend and sent your deputy to represent you. We want to invite you to visit us during the World Diamond Congress which will be held in Israel in 2018. We would be happy if you would be our guest of honor at the Congress. Thank you for coming to visit the Israel Diamond Exchange.” 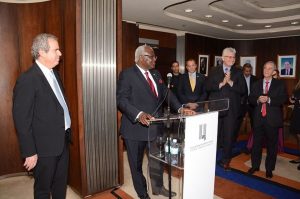 Responding to the sentiments expressed by the IDE President, President Koroma thanked him for the hospitality extended towards him and his entourage, and said, “We are pleased to be here today. The invitation in 2008 arrived 45 days after I was elected president so I couldn’t make it. This time I am here. The diamonds in Sierra Leone are God’s gift to the country, and we are glad we have business partners. Sierra Leone has known difficulties but we have dealt with them and come through them reinforced and we are full partners in the Kimberley Process and diamond trading is being conducted successfully.”

Continuing further in the same vein President Koroma added, “There are opportunities to develop diamond deposits in the country. Although some mining deposits are depleting, there are still kimberlites that are worth researching and can be highly worthwhile. We want to continue to be active in the diamond sector and market our special diamonds. Investing in Sierra Leone will provide a return on investment, and Sierra Leone will also receive its fair share from its diamonds. This is a situation where everybody profits. Our government has come to Israel to promote and strengthen our relationship with the State of Israel in all fields.”

Paul Hirschson, Israel’s ambassador to Sierra Leone, reassuring prospective Israeli investors in Sierra Leone, said, “Sierra Leone has business opportunities, and in the capital, Freetown, one feels safe and it is pleasant to walk around. The Israeli Embassy and its team are ready to help all Israelis with projects.”
After the conclusion of the ceremony, President Koroma and his entourage were taken on a tour of the trading hall and the Technology Division of the exchange.