Part I of the Christie’s Sale of the Private Collection of President and Mrs. Ronald Reagan, one of the most admired and respected presidents of the United States, held on September 21st and 22nd, 2016, at the New York Rockefeller Plaza, as predicted smashed all estimates, realizing US$ 5.7 million, almost three times the modest estimate of US$ 2 million placed on the entire collection of over 700 lots. Provenance alone undoubtedly played a major role in enhancing the hammer prices of the lots, so much so, that the estimated target of US$ 2 million for the entire auction, was far exceeded by the conclusion of only Part 1 of the sale !!!  Hopefully, when the online component of the sale (Part II) is also concluded on the 28th of September, 2016, the total proceeds of the sale, might even exceed US$ 10 million, which undoubtedly would be good news for The Ronald Reagan Presidential Foundation and Institute, to whom the proceeds of the sale are designated, in accordance with the wishes of the late President and First lady. The unprecedented international response to the sale, with more than 1,200 registered bidders from 34 countries taking apart, is a clear indication of the great respect and admiration in which the Late President and the First Lady, were held, by the international community, particularly his contribution in ending the cold war with the Soviet Union, and making the world a safe place for human existence.

Brooke Hazelton, President of Christie’s Americas commented: “In Christie’s 250th anniversary year, it’s been an honor and a privilege to offer for sale The Private Collection of President and Mrs. Ronald Reagan. Clients from all over the world took part in this unprecedented opportunity to acquire items that give insight into the public and private life of the nation’s 40th President and First Lady. The market’s response to this landmark collection has been remarkable, with the overall results far exceeding pre-sale expectations.”

John Heubusch, Executive Director of the Ronald Reagan Presidential Foundation and Institute added: “We are honored and inspired by the tremendous outpouring of global interest and enthusiasm in the legacy of the President and Mrs. Ronald Reagan. The remarkable results generated thus far at Christie’s will ensure the Foundation and the Presidential Library it supports, is well equipped to continue its important mission into the future. It has been a pleasure to work together with Christie’s to create this celebratory global event in keeping with Mrs. Reagan’s wishes, for the benefit of the next generation of visitors to the Reagan Library.” 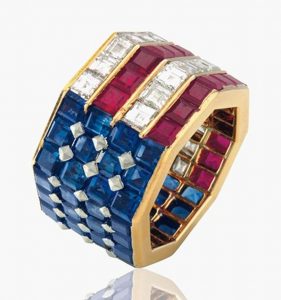 441 Lots were on offer at the live auctions, and all lots without exception were sold, at an enhanced price, from a single fold to several folds enhancement. Top Lot of the sale was a jewelry lot, Lot 126, “A Diamond Sapphire and Ruby Ring, by Bulgari” which realized US$ 319,500, which was 64 folds more than the lower estimate of US$ 5,000 and 40 folds more than the upper estimate of US$ 8,000. The size 5 1/2, octagonal shaped, platinum and 18k gold ring, designed as an American flag motif, set with square-cut blue sapphires, rubies and diamonds, was famously worn by the Fist Lady, when she attended the 4th July 1986 Liberty Weekend Celebrations with the President, held aboard the USS Iowa in New York Harbor. 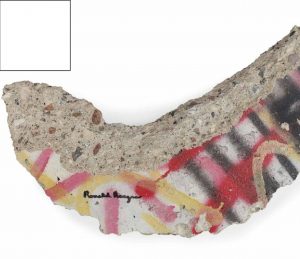 Lot 65 – A signed fragment of the Berlin Wall

The 2nd highest selling lot was Lot 65, a lot with great historical significance, a signed fragment of the Berlin Wall, an evocative relic that symbolizes one of President Ronald Reagan’s greatest foreign policy achievements. The lot was titled, “Reagan, Ronald (1911-2004). His signature (‘Ronald Reagan’) accomplished in black felt-tip pen on the surface of a sizable graffiti-strewn fragment of the Berlin Wall. Approximately 25 in long, 13 in tall and 2 in thick.” 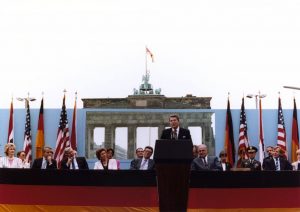 President Reagan’s address in front of the Brandenburg Gate of the Berlin Wall, on June 12, 1987 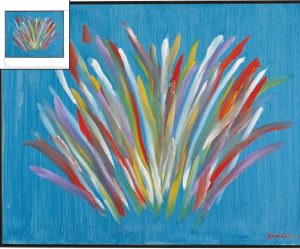 The 3rd highest selling lot of the sale was Lot 107, which registered a price of US$ 223,500 thirty seven times the lower estimate of US$ 6,000 and twenty eight times the upper estimate of US$ 8,000. The lot is a 1984 oil on canvas painting by Frank Sinatra, the famed artist and singer, titled “Fourth of July Fireworks, 1984,” with dimensions of 22 x 28 ins. ( 55.8 x 71.1 cm.). Signed and dated ‘Sinatra 84’ (lower right); signed again with initials and inscribed ‘Dear Nancy-/ Happy 4th and Birthday!/ F.A.S.’ (on the reverse), the painting was a personal gift to the First Lady Nancy Reagan, on the occasion of the 4th of July, Independance Day celebrations and the First Lady’s 63rd birthday that followed two days later on July 6. 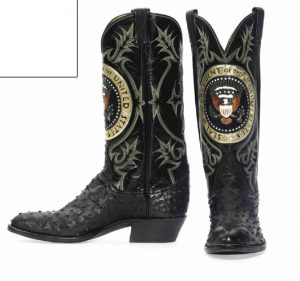 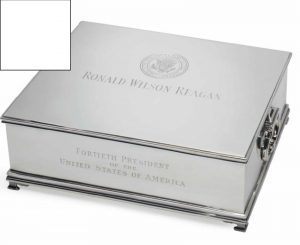 Lot 250 – All Hail the Chief – An American Silver Musical Humidor

Lot 250 was a gift by Bob Gray, a Republican activist, to commemorate Ronald Reagan’s election as the 40th President of the United States. The lot is an American Silver Musical Humidor, mark of Tiffany & Co. New York, circa 1981. The hinged top engraved with the Presidential Seal of The United States, “RONALD WILSON REAGAN, FORTIETH PRESIDENT OF THE UNITED STATES OF AMERICA, WITH PRIDE AND BEST WISHES ALWAYS, BOB GRAY”. Mahogany-lined, playing “All Hail the Chief”, marked to the underside. dimensions 10 x 8 x 3½ ins. (25.5 x 20.3 x 8.3 cm.). The price realized was 40 times the lower estimate of US$ 5,000 and 20 times the upper estimate of US$ 10,000. 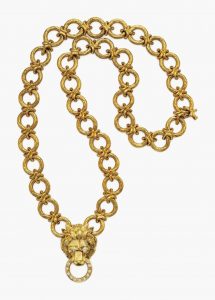 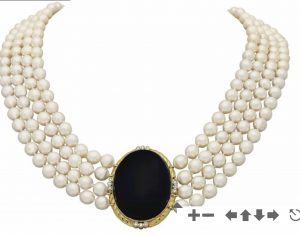 Lots 131 and 161 sold for the same hammer price of US$ 40,000. Lot 131 was an “Onyx and Four-Strand Cultured Pearl Necklace.” The centerpiece of this cultured pearl necklaece was a bezel-set oval onyx cabochon, mounted on 14k yellow gold. The bezel made of sculpted 14k yellow gold is set with groups of three circular-cut diamonds at the cardinal points of the oval shaped bezel, making a total of 12 circular-cut diamonds. The four strand of cultured pearls arise from either side of the oval onyx cabochon. The diameter of the pearls vary from 5.50-7.50 mm.The length of the shortest strand is 14 ins, equivalent to a “CHOKER.” 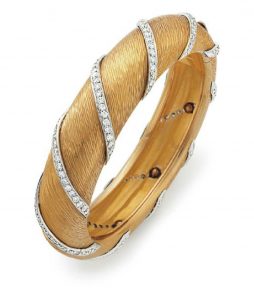 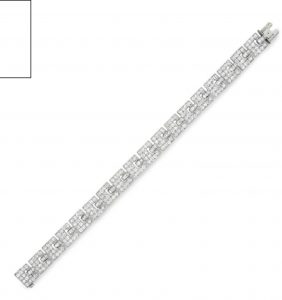 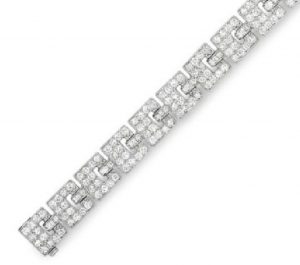 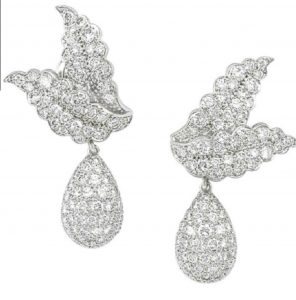 Lot 154 is a “Pair of Diamond and Platinum Ear Pendants,” designed by Van Cleef & Arpels and with a presale estimate of USD 5,000-7,000. Each ear pendant, 1 3/4 ins. in length and made of platinum is designed as two over lapping leaves, set with circular-cut diamonds, suspending a detachable bombé drop, also set with circular-cut diamonds. The lot sold for an enhanced price of US$ 36,250, which was seven times the lower estimate of US$ 5,000 and five times the upper estimate of US$ 7,000. 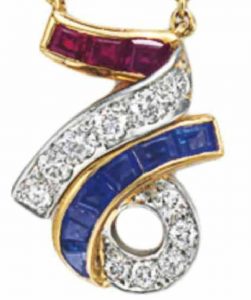 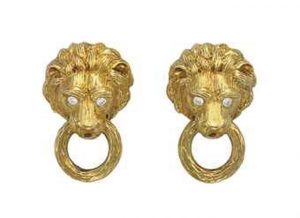 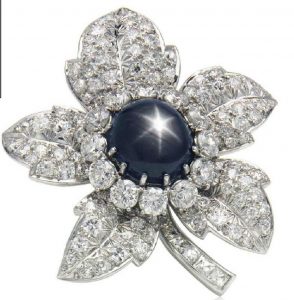 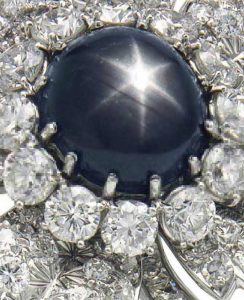 Lot 155, with a presale estimate of USD 3,000-5,000 is titled “A Black Star Sapphire And Diamond Brooch.” The 1 5/8 ins. platinum brooch is designed as a flower with petals, stalk and central pistil. The petals are set with circular single-cut diamonds and the stalk with rectangular French-cut diamonds.The central pistil is set with a circular black star sapphire cabochon, surrounded by a row of circular, single-cut diamonds. The lot sold for USD 20,000 which was 6.7 times the lower estimate of US$ 3,000 and 4 times the upper estimate of US$ 5,000.