Over 100,000 online voters participated in the selection of the new setting for the Hope Diamond from the 18th of August to the 7th of September. The voters had to select one out of three settings designed by Harry Winston. The three settings were named Journey of Hope, Embracing Hope and Renewed Hope. 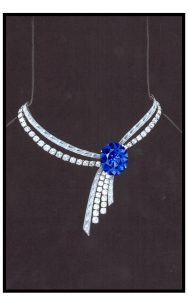 Journey of the Hope

The Hope diamond is a 45.52- carat blue diamond of Indian origin. According to the Gemological Institute of America (GIA) the color grade of the diamond is fancy dark grayish blue with a VS-1 clarity (very slightly included). The cut is cushion cut antique brilliant.

Presently the old setting on the diamond is removed and it is on display to the public without any setting till April 2010 in the Harry Winston Gallery at the Janet Annenberg  Hooker Hall of Geology,  Gems and Minerals. Because blue diamonds are extremely rare the staff at the Smithsonian Institution has a rare opportunity of examining it said Jeffrey E Post, a geologist and curator in charge of the mineral collection.

By the end of next year the Hope diamond will be returned to its original setting. The Hope Diamond in the old setting- Copyright Smithsonian Institution

The Hope diamond which is also known for its “Curse” has brought us good luck said Cristián Samper the museum director.

For more information on the  Hope Diamond, including the curse of the Hope diamond see this link