It is encouraging to note that the gem and jewellery sector has recorded an overall growth of US$87.6 Million during the first 2 months of 2008 in comparison with the corresponding figure of 2007. The National Gem and Jewellery Authority’s role as a facilitator and promoter has strengthened the industries foundation as evidenced by its continued growth figures. NGJA launched its dynamic website in July 2007, with e-commerce facility providing the Sri Lanka Gem and Jewellery Traders with an opportunity to offer their products for sale online. But the trades response to it fell far short of our expectation.

Today buyers worldwide are shifting onto the web and therefore the gem and jewellery trading community has no alternative but to move with the times .Analysis of statistics released by the US Department of Commerce reveal a universal tendency among buyers of luxury goods to research products online ahead of purchase. The speed at which jewellery sales are moving On-line (at the current rate) is doubling every four years. The emergence of the Internet as an alternative trading channel has presented traders with new opportunities and challenges. But only the smartest can seize these opportunities.What we need is a paradigm shift. Today’s customer is actively seeking information about a product and wants to know as much as possible before purchasing.It is the traders responsibility to answer every question that the customer might pose and hopefully convince them that it is exactly the product they need.

Get these basics right and your web marketing is sure to be successful.

The gem and jewellery sector has recorded an overall growth of 39% during the first 2 months of 2008 earning a revenue of US$87.6 Million in comparison with the corresponding figure of US$64.4 Million in 2007.

The Gem and Jewellery and Diamond export sectors have been identified as lucrative money spinner which can be converted to a US$1 Billion industry within five years.

The concessions produced by 2008 Budget Proposals are being implemented to further strengthen the gem and jewellery industry. These positive aspects may have encouraged the industry to make a 66% growth on Gem Exports and 90% growth on jewellery exports during the first two months of 2008 in comparism with 2007. It is noted that participation at leading international exhibitions will create awareness among the Global players on Sri Lankan Precious Stones and Jewellery.This may lead to an increase in foreign exchange earnings and generation of employment opportunities, finally the benefits will be enjoyed by all the sectors of the industry.

In its endeavors to promote the industry, the National Gem and Jewellery Authority will venture into new markets with the aim of making Sri Lanka the regional center for coloured sapphires and gem studded jewelry.

I am happy to state that the National Gem and Jewellery Authority continues to play a strong leadership role guiding the industry on a steady path of expansion and growth while upholding the best interest of all the stakeholders.

Gems are a very important mineral resource in Sri Lanka. According to the chronicles, Sri Lanka’s gem industry has a very long history and dates back even before the 6th century BC. It is one of the oldest industries of Sri Lanka, which still plays a major role in Sri Lanka’s economy.In ancient times Sri Lanka was also known as the “Ratnadeepa”(The island of gems) by foreigners . There is much evidence available on the ancient Sri Lankan gem industry and gems in the ancient chronicles and records of monks , tourists, explorers, historians and others.

The first record of Sri Lankan gems is found in the Mahawansa (Chapter1: 46) according to which Lord Buddha (625-545BC) arrived in Sri Lanka in the 6th century BC to settle a dispute between two Kings of the Naga tribe- Chulodara and Mahodara – over a gem studded throne .Also in the 6th century BC King Vijaya , Sri Lanka’s first monarch, after his second marriage anually sent pearls worth two hundred thousand to his father-in-law -southern India’s Madura King [Mahawansa Chapter 7:73]. King Devanampiyatissa who ruled Sri Lanka in 250BC sent three kinds of beautiful gems and six kinds of pearls to India’s Emperoe Asoka as a gift [Mahawansa Chapter 11:22] . King Parakramabahu I [1153-1186 AD]sent gems and pearls to foreign countries by ships for trade purposes[Mahawanse Chapter 69:33].

Apart from Mahawansa many other chronicles too refer to Sri Lanka’s gem industry. King Vibeeshana of Sri Lanka sent gems and pearls as a gift to king “Yudeeshdeera” of North India’s Kuru Kingdom. It is also recorded in Mahabharata [Ekanayake ed,1984-292].

In the book “Periplus of the Erythrean Sea ” the author mentions that merchants came to the western coast of India to buy gems and pearls from Sri Lanka [Vincent-1998:507]. “Pliny” the Roman historian in the first century AD wrote on Sri Lanka’s gems and pearls [Bandaranayaka, Devaraja ed 1991].Ptolemy [140 AD] the Greek historian too refers to the Sri Lankan gems [Vincent 1998: 511]. Chinese Monk “Fa-hsien” says Sri Lanka bartered gems and pearls for other goods [Balagalla 1999: 92]. Sri Lanka’s Buddhist missionaries who went to China in 740A.D took gifts that included gems and pearls [Ekanayaka 1984:292]. An Egyptian trader “Cosmos” [399-444 A.D] also refers to Sri Lanka and her gems. According to the voyage of two Muslims : There were several types of precious gems in Sri Lanka. The 9th century geographical writer “Abozeyd” mentions Sri Lanka gem localities [Punchiappuhamy 1985: 24] .The arabian reporter “Al Idusi” [1099-1151AD] says that gems were exported from “Serendib” (Old Arab name for Sri Lanka) to foreign countries. “Marco Polo” (1256- 1320 AD) who came to Sri Lanka in the late 13th century and “Ibn Batuta” Who came in the 14th century describes the locations and varieties of gems found in Sri Lanka and how people wore them [Punchiappuhamy 1985: 24] .Peisin who came in the early 15th century also mentioned about Sri Lankan Gems [Ekanayake: 1984: 296}. Robert Knox who wrote the book “An Historical Relation to the Island of Ceylon” also refers to gems in the Island [Karunaratne 1998: 262].

The above records show that Sri Lanka’s gem industry has a history of nearly 2500 years .Unlike most other industries here, the gem industry enjoyed royal patronage and the government was involved in it. Then as now, gems were a major export product of the country that became world famous for her precious stones

Quartz and its properties

The most common mineral of the Earth’s crust is Quartz. The name “Quartz” comes from the Greek word “Krustallos” , meaning ice, because it was thought that quartz was ice created by the God’s. Since the middle ages crystal balls made of colourless quartz were used to predict the future.

The chemical composition of quartz is the crystals system is trigonal and usual forward as hexagonal prisms with pyramidal ends and striations perpendicular to their length , they are often twinned .Cleavage is poor and fracture is conchoidal.

These varieties are brown green and blue

Quartz is anisotropic, when a ray of light falls onto quartz it is split onto two rays, with different velocities ,because the chemical bonds of quartz is different in different directions .There is a direction in which the light rays are not split into two, and therefore emerge as one ray. This direction is called the optic axis and the minerals mattered uniaxial (One optical Axis), so quartz is uniaxial.

Refractive index of quartz is 1.544 – 1.553 birefringence is 0.009 optic sign is positive due the the  helical structure along the optic axis parallel to c-axis light rays travel in a circular polarization character . This is because of the enantiomorphism (Right and left handed crystals)Quartz shows this character. Therefore when observing the uniaxial interference figure under polaroscope a characteristic feature is seen.It is called the “Bull’s Eye Effect” . A dark cross with coloured rings but with a bright center.Other uniaxial gems do not show this effect. Crystalline quartz could be cut using brilliant cut mixed or emerald cut. 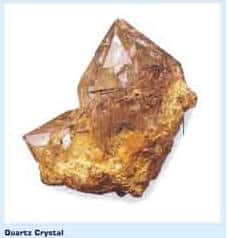 Uniaxial Interference Figure of other Minerals

Bottle made with Rutilated quartz

Quartz with mineral inclusions are attractive. “Rutilated Quartz” or “Sagenite” also known as “Venus-hair” stone is quartz with needle like rutile crystals. These may be red or black or brassy yellow and have a metallic luster . “Tourmalinated quartz” inclusion of black tourmaline which form prismatic or needle like crystals.

Agate, Sard, Sardonyx, Onyz are all cryprocrystalline quartz. They show different colours.These minerals show mica banded structure which can be used in carvings as sculptures  and Intaglios.

They can also be used to make cameos.

These varieties are also used for ornamental works and handles of knives.

In ancient times rock crystals( Colourless quartz) was used for glasses of spectacles.