Gems & Gemology, the quarterly scientific journal of the Gemological Institute of America in its first issue for 2015, takes a journey around the world, exploring the latest sources of colored gemstones, such as blue spinel from Vietnam, amethyst from Morocco and ruby from Mozambique as well as reporting on the progress made by China’s jewelry designers and the February 2015 Tucson Gem and Mineral shows. The Spring 2015 issue of Gems & Gemology is now available in print, and online with exclusive video content.

The cover story of this issue is “Blue Spinel from the Luc Yen District of Vietnam,” by Boris Chauviré, French researcher and his co-authors. The extensive and well-researched article deals with all aspects of the geology of the spinel deposits of Luc Yen in northern Vietnam and gives the gemological characterization of the vivid-blue spinel, whose remarkable color is attributd to traces of Cobalt. 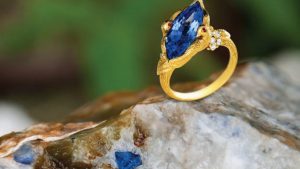 The next article is titled “The Chinese Soul in Contemporary Jewelry Design.” Written by GIA’a Andrew Lucas, Merilee Chapin, Moqing Lin and Xiaodan Jia, the article suvey’s the notable progress made by China’s jewelry designers over the last decade. The artistic prowess of Chinese jewelry designers is increasingly evident on the global stage, not only influenced by their cultural roots but also driven by the rapidly growing domestic consumer market.
Another feature provides an introduction to amethysts from Boudi, Morocco, and is the result of a joint study undertaken by a Moroccan-Italian team, headed by Fabrizio Troilo. The in-depth study outlines the geology, mining, and the internal and external features of this attractive material. The fourth and final peer-reviewed article, by GIA researchers Dr. James Shigley and Dr. Mike Breeding, reviews colored diamond spectra, including an exclusive and informative foldout chart.

A field study conducted by Merilee Chapin, Vincent Pardieu and Andrew Lucas at Mozambique’s Montepuez ruby deposit, currently the world’s most important commercial source of ruby, resulted in an extensive field report dealing with the geology and mining practices in this area, published in this issue of Gems & Gemology.