An 8.74 carat blue diamond was sold for 5.7 million U.S dollars at Sotheby’s auction in Hong Kong on Wednesday the 7th of October 2009. 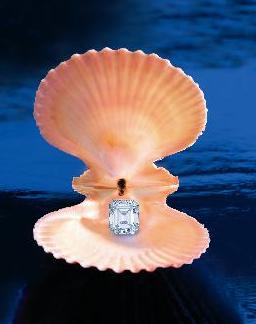 The diamond was emerald cut  fancy intense blue with VVS1 grade (which is the third best grade).

The stone was bought by an anonymous phone bidder. Four rivals were also bidding seriously for the diamond. The price escalated at the rate of HK$ 1 million per bid.

318 lots were offered for sale at the same auction. 255 were sold. Diamonds and Jadeites were the stones that were preferred by the bidders. Six bidders fought for a 28.88 carat D-color flawless round diamond. The final price of the round diamond was HK$ 36.5 million. An 18.08 carat Kashmir sapphire and diamond ring fetched HK$ 11.7 million.

According to the Times Online government stimulus, Soaring Shanghai stocks and explosive property market in Hong Kong have all contributed to make the Chinese tycoon the most potent buyers of fine art, wine and jewelry.

The throne of Emperor Qianlong was sold to a Chinese stock market investor for HK$85.8 million in yet another record set this week. The Sotheby’s Hong Kong auction lasted for six days. The auction sales raised HK 1.3 billion which is 20% higher than expected.