Bahrain, one of the most ancient sources of naturals pearls in the world, referred to by the ancient Greeks and Romans as the Island of Tylos, with a pearling tradition dating back to seven millennia, is once again set to regain its ancient glory as a source of natural pearls, after the signing of a memorandum of understanding between the Bahrain’s Ministry of Industry and Commerce (MOIC), and the Bahrain Economic Development Board (EDB) and the Gemological Institute of America (GIA), aimed at the development of the kingdom’s Gemstone and Pearl Testing Laboratory (GPTLB) as a world class, state-of-the-art facility for research into the production of natural pearls. Incidentally, Bahrain is one of the few countries in the world, that has banned the import and sale of cultured pearls, in order to preserve their ancient pearling traditions, and give a boost to its newly revived, fledgling natural pearl industry. 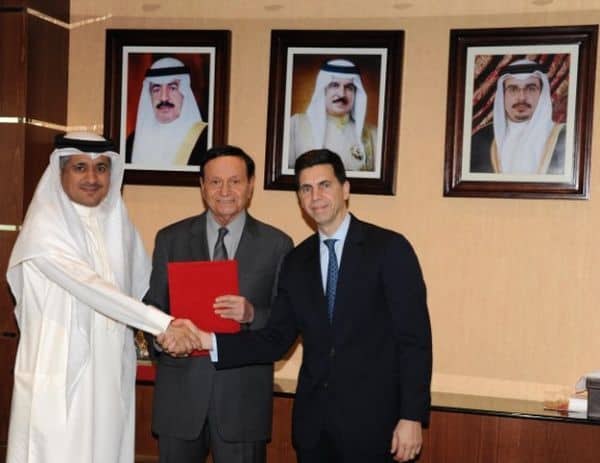 GIA Officials After the Signing of the MoU

The terms of the MoU spells out that the signatories will work together to protect and enhance Bahrain’s natural pearling industry, aimed at developing capacity, research, expertise and technological know-how at the GPTLB, as well as identifying further opportunities for the growth of the sector.
Minister of Industry and Commerce, Hassan Abdullah Fakhro thanked the Crown Prince and Deputy Supreme Commander of Bahrain, Prince Salman bin Hamad Al-Khalifa for his timely initiative in developing the natural pearl industry across Bahrain, that would no doubt contribute in restoring the ancient glory of Bahrain as a source of high-quality natural pearls and a world pearling center. He further affirmed that the initiative will benefit not only the people and government of Bahrain but all those involved in the pearling industry at present and those who plan to invest in the industry in the future.

“By working in partnership with the GIA, the GPTLB will be provided with the facilities and expertise required to capitalize on regional and international trade and investment opportunities in this fast growing sector,” he added.
The Acting Chief Executive of the Bahrain Economic Development Board, Mr. Kamal bin Ahmed, who is also the Minister of Transportation, said, “This initiative, led by the Crown Prince Salman bin Hamad Al-Khalifa, is a positive and crucial step towards reaffirming Bahrain’s position as the world’s leading natural pearling center.”
He further added, “We are delighted to be working in partnership with the Gemological Institute of America, a leading source of research and education in gems and jewellery, to ensure the GPTLB has the tools required to boost Bahrain’s pearl production capacity. Historically, pearling was the backbone of our economy, before the advent of petroleum and we want to capitalize on our heritage, combined with world-class techniques and processes, to create a center of excellence for the natural pearl industry here in Bahrain”.
GIA’s Executive Vice President and Chief Laboratory and Research Officer Tom Moses said, “We are honored to contribute GIA’s expertise and research, and to work alongside the EDB and the MOIC to build on Bahrain’s history and reputation, as a leading center for natural pearl research and production.”
The agreement builds on Bahrain’s 7,000-year-old history as a world pearling center, an industry which was once the backbone of the Kingdom’s economy before the advent of petroleum. Statistics compiled by Robert Carter in his extensive research paper on the Persian Gulf pearl fishery, show that pearling was the major economic activity on the Arabian side of the Persian Gulf in the early 20th-century, followed by fishing and agriculture. During this period out a total population of 100,000 in Bahrain, 17,633 men were engaged in pearling, which represents 18% of the total population and 36% of the male population, assuming 50/50 sex ratio. 17,633 males equivalent to 36% of the male population, out a population of approximately 100,000, was the highest among the coastal towns/districts engaged in pearling. Thus, out of all the fisheries on the Arabian-side of the Gulf, Bahrain had the highest number of males taking part in pearling, which indicates a major industry based on pearl fishing.
Bahrain is also engaged in a project overseen by the Ministry of Culture, known as the Pearl Route project, aimed at restoring, preserving and maintaining the ancient pearling neighbourhoods, any artefacts and cultural heritage associated with the country’s ancient pearling industry. The Pearl Route project costing BD 10 million (£16.2m) in one of Bahrain’s oldest neighbourhoods was launched on November 28, 2013, at an event held under the patronage of Crown Prince H.R.H Prince Salman bin Hamad Al Khalifa, to honour the inscription of the Pearl Route as Bahrain’s 2nd UNESCO World Heritage Site, and the 10th site to be awarded this status in the GCC. The 1st UNESCO World Heritage Site in Bahrain is the Qalat Al Bahrain (Bahrain Fort), which gained this status in 2005, as the capital of the ancient Dilmun civilisation.