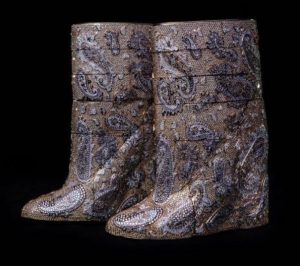 Diamond Boots by Vandevorst and Diarough

Marcel Pruwer, the president of the Antwerp Diamond Bourse (Beurs voor Diamanthandel), Antwerp’s largest diamond exchange, commenting on the upcoming fair, said, “We feel that with this edition of the Fair, we are presenting the full potential of Antwerp’s diamond industry and trade. Five years after its inception, the ADTF with its breathtaking array of diamonds, is living proof of Antwerp’s leading position as the world’s preferred diamond supplier to the downstream markets worldwide.”
Among the visual highlights lined up for the fair, will be the display for the first time in Europe during the “Antwerp Diamond Night” on January 26, the “Diamond Boots,” Belgian luxury label A.F.Vandevorst’s glittering calfskin shoes, covered with 38,883 colored diamonds set in 4,783 grams of gold, with an estimated worth of US$ 3.19 million, and taken 30,000 man hours to complete. To celebrate Antwerp’s fashion and diamond industries and highlight the creative spirit of Antwerp, on the initiative of Flanders Investment and Trade (FIT), Belgian luxury label A.F. Vandevorst teamed up with diamond company Diarough to create the pair of glittering boots, which were first unveiled in December 2013 in Hong Kong, during a ceremony attended by her Royal Highness, Mathilde, the Queen of Belgium; the Minister-President of the Government of Flanders, Kris Peeters; and Vice-Prime Minister and Minister of Foreign Affairs, Didier Reynders.
During the fair, two breakfast seminars are scheduled. On January 27, Chicago diamond marketing pundit Aleah Arundale-Siegel will speak to retailers on marketing diamonds and diamond jewelry. At the second breakfast seminar, on January 28, Ernest Blom, the president of the World Federation of Diamond Bourses (WFDB), will present the initiative undertaken by the World Diamond Mark Foundation (WDMF) to create and implement a global, generic diamond marketing and promotion campaign.