The six-day VICENZAORO January Jewelry Show, also  called “The Jewelry Boutique Show” the first jewelry show in the international jewelry show calendar, organized by the Italian Exhibition Group (IEG), formed by the merger of Fiera di Rimini and Fiera di Vicenza, came to a successful conclusion on the 24th of January 2018, with organizers reporting an all-round excellent performance, with a significant increase of  around 10% in the number of buyers attending, compared to the January 2017 show, coming from 130 countries and reaching over 36,000 total presence over several days. In this context VICENZAORO confirmed itself as Europe’s reference event, dedicated to jewelry and capable of generating business relationships with all the most important reference markets in the world. 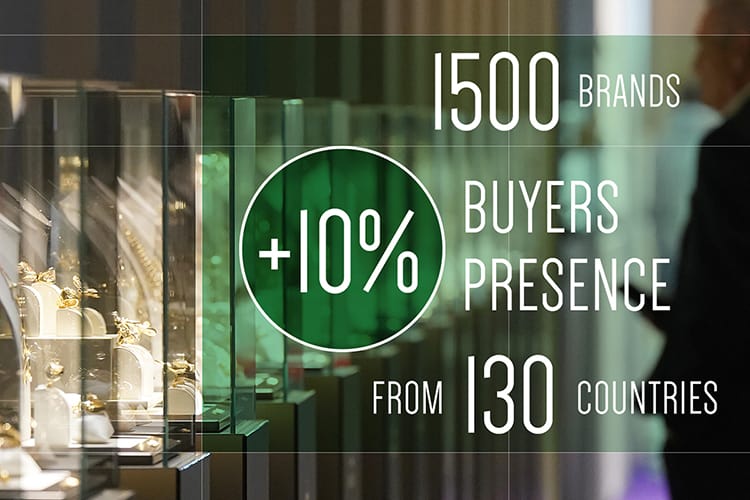 The show featured more than 1,500 brands, 40% of which came from 35 countries and the most important production areas. The increase in the presence of international buyers of the most important countries for the global gold and jewelry sector, clearly signals the recovery of Italy’s jewelry market after a two-year undertone. However, in spite of this positive indication for Italy’s economy VICENZAORO January indicated that the number of foreign buyers participating was more than those of Italian nationality.

Out of this Continental Europe confirmed its important presence, by registering significant growth, such as Germany showing a 22% increase, United Kingdom 14% and Greece 20%. Other European Markets, which are considered fundamental not only for the gold and jewelry products, made in Italy, but also for the world’s jewelry demand, also showed significant increases. Among such markets are Turkey showing and increase of 34%, Russia 15%, and Ukraine 13%. Only Spain in Europe recorded a decrease in presence at the show.

Likewise, extremely positive data was registered from other dynamic markets for luxury operators coming from countries such as US, showing increase of 24%, Japan 31%, China 29% and the UAE 9%. However, the greatest increase of 51% was shown by India, the Asian country which was responsible for the strong international recovery in the demand for gold for jewelry in 2017. India showed a great interest for the production technologies presented at T.GOLD.

In respect of North African countries, the Middle East and Iran in general, their presence also remained very important, although there appears to be a polarization towards Dubai, where VICENZAORO is already directly present – in a joint venture with Dubai World Trade Centre (DWTC) – with its VOD format Dubai International Jewelry Show.

The winter edition of VICENZAORO, an important showcase for the companies that presented a preview of all their new collections for the New Year, also became an ideal occasion for the official recognition and celebration of achievements in the sector, by the awarding of Jewelry Oscars at the Andrea Palladio International Jewelry Awards held in the evening of January 19, 2018, that celebrated the best of contemporary jewelry, from design to production, from retail to communication and from CSR to lifetime achievement.

The support of the Ministry of Economic Development (MISE – Ministero dello Sviluppo Economico and ITA – Italian Trade Agency, is gratefully acknowledged by the organizers of the show and thanks to this collaboration, at VICENZAORO January, 500 buyers were hosted, selected from the main markets, that have been added to the over 1500 operators managed directly by IEG.

The Central theme of VICENZAORO January 2018 was focused towards the Future, and the opening event of the show, VISIO.NEXT SUMMIT dealt with this theme, offering participants a real glimpse into the world of luxury and jewelry, with a focus on brand enhancement, new distribution channels and the role of the next-generation consumer.

The favourable outcome recorded by this edition of the Show, was the result of  the winning strategy adopted by IEG, focusing on the strong search and selection of brands eligible to participate; on the creation of a platform and an effective business network for international development; on the strong content proposal – also digital – with high added value, aimed at supporting the industry through the great changes taking place, the challenge of traceability, sustainability, intelligent industry and new models of communication and distribution – omnichanneling.

T.GOLD, the world exhibition dedicated to technologies for the different processing of jewelry and unchallenged leader at the international level – also organized by IEG on the same dates as VICENZAORO January – registered a growth of professional visitors of over 16%, compared to the previous edition held in 2017, which had already registered a significant increase. T.GOLD 2018, also marked a significant increase of 20% in the number of Exhibitors, thanks to a new, specially designed temporary exhibition space. This event is a true Hub of innovation, from which is derived every new choice of process and product that the global jewelry industry intends to introduce.

Hence, T.GOLD represents not only a fundamental moment of buying new technologies, among which the whole world of 3D printing cannot be missing, but also an essential appointment for the update on new techniques and the most advanced researches.

The next T.GOLD exhibition is scheduled to take place from March 1-5, 2018, referred to as T.GOLD International + METS to be held in Hong Kong.