A rare 19th-century diamond, the 55.09-carat, champagne-colored, flawless, emerald-cut Kimberley Diamond, has gone on temporary display at the American Museum of Natural History, New York, beginning from, Thursday, July 11, 2013. The diamond on loan from Bruce F. Stuart Trust will be on display at the museum until the end of June 2014. 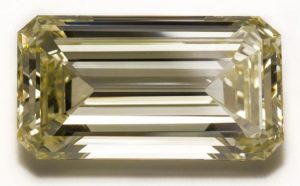 The champagne-colored, Cape series diamond, cut from a 490-carat rough diamond crystal, is believed to have been discovered from the renowned Kimberley diamond mine, in the Northern Cape Province of South Africa, during the initial stages of its exploration starting from 1869. The diamonds of the Cape series originated mainly in the first two deep diamond mines dug on the farm, that previously belonged to Nicolas and Diederick de Beer, known as the Kimberley and De Beers diamond mines, which were at one time the world’s most productive mines.

The diamond, whose early history is somewhat murky, including the belief that it was once part of the Russian Crown jewels, was acquired by an anonymous buyer, still as a 490-carat rough diamond crystal, in the early 20th-century. The rough diamond was cut into a 70-carat, step-cut, champagne-colored, almost flawless finished diamond in 1921. The diamond was subsequently acquired by the New York City’s Fifth Avenue based, renowned diamond cutting and fine jewelry company, Baumgold Bros., who got the diamond re-cut in 1958, into its modern emerald-cut form, enhancing its proportions and brilliance and weighing 55.09 carats. The 55.09-carat, champagne-colored, flawless, Kimberley diamond is one of the most perfectly cut emerald-shaped diamonds in the world today.

In 1971, Baumgold Brothers sold the diamond to Bruce F. Stuart, the great-grandson of Carnation Company founder Elbridge Amos Stuart, the American Milk Industrialist and creator of Carnation evaporated milk, who marketed his products with the famous slogan ” Carnation Condensed Milk, the milk from contended cows.” The diamond was subsequently placed in the Bruce F. Stuart Trust, from where the diamond has been loaned to the American Museum of Natural History, to be exhibited to the public from July 2013 to June 2014.