Sri Lanka , the  tiny  island nation  at the tip of  the Indian sub-continent ,  popularly known as  the “Pearl of the East” and famous for its pearls and colored gemstones since  time immemorial, is once again in the news of the international  gem   and jewelry trade, after  the November  2010,  announcement  of the  engagement of Prince William, the second-in-line of succession  to the British throne, to Kate Middleton. Soon after the long awaited announcement, the happy couple appeared for the first time,   arm-in-arm in front of a barrage of camera flashes, and Kate Middleton was seen wearing an engagement ring given to her by the Prince. The white gold  cluster ring, with an 18-carat Sri Lankan cornflower  blue sapphire , as its centerpiece and surrounded by  16 brilliant-cut diamonds,  looked very familiar. It was none other than the engagement ring  used by Prince Charles, the  Prince of Wales to propose to Lady Diana Spencer in February  1981. After Princess Diana’s death,  the ring reportedly came into the possession of Prince Harry, while Prince William inherited Diana’s  Cartier watch.  Prince Harry apparently then decided that  the celebrated ring of sentimental value to both of them , should appropriately  adorn the finger of the future Queen of  England,  and  gave the ring to Prince William to  be given to his  fiancée.

“Obviously, she is not going to be around to share in any of the fun and excitement of it all, so this is my way of keeping her  sort of close to it all,” William said of his late mother,  and the decision to use the same engagement  ring,  in a joint interview with Middleton . 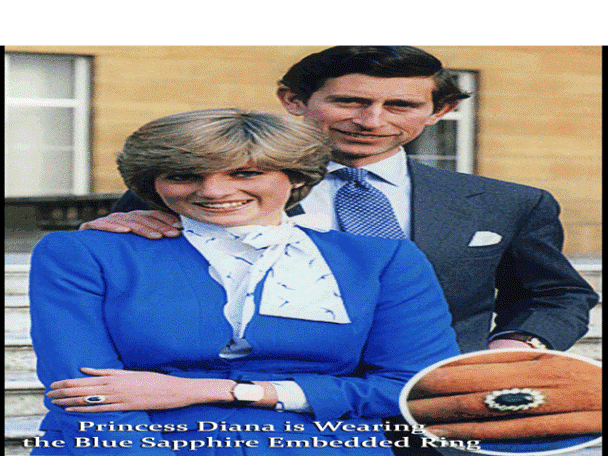 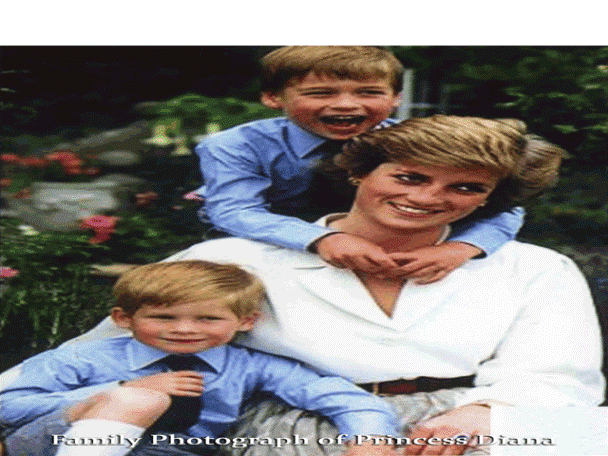 Princess Diana with her children Prince William and Prince Harry

Minutes after the engagement ring  was unveiled,  jewelry stores around the world  started getting  calls requesting for replicas of the ring.  There  was a surge in business  worldwide for  Diana  type engagement  rings,  incorporating  blue sapphires  and diamonds,  a repetition of the boom witnessed in 1981, soon after  the engagement  of  Prince Charles to Lady Diana Spencer.  The demand for Sri Lankan blue sapphires also surged with the announcement,  and the National Gem & Jewelry Authority  of Sri  Lanka reported receiving  large numbers of inquiries for  the supply of blue sapphires from dealers across the global markets. The United Kingdom,  that was among the top fifteen buyers of Sri Lankan gems, was expected to procure more  of the fine quality sapphires  from Sri  Lanka, to  cater to the unprecedented  demand created after the announcement  of the royal  engagement. 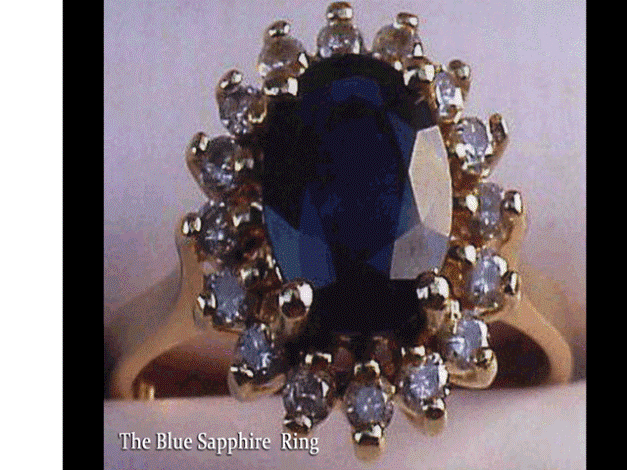 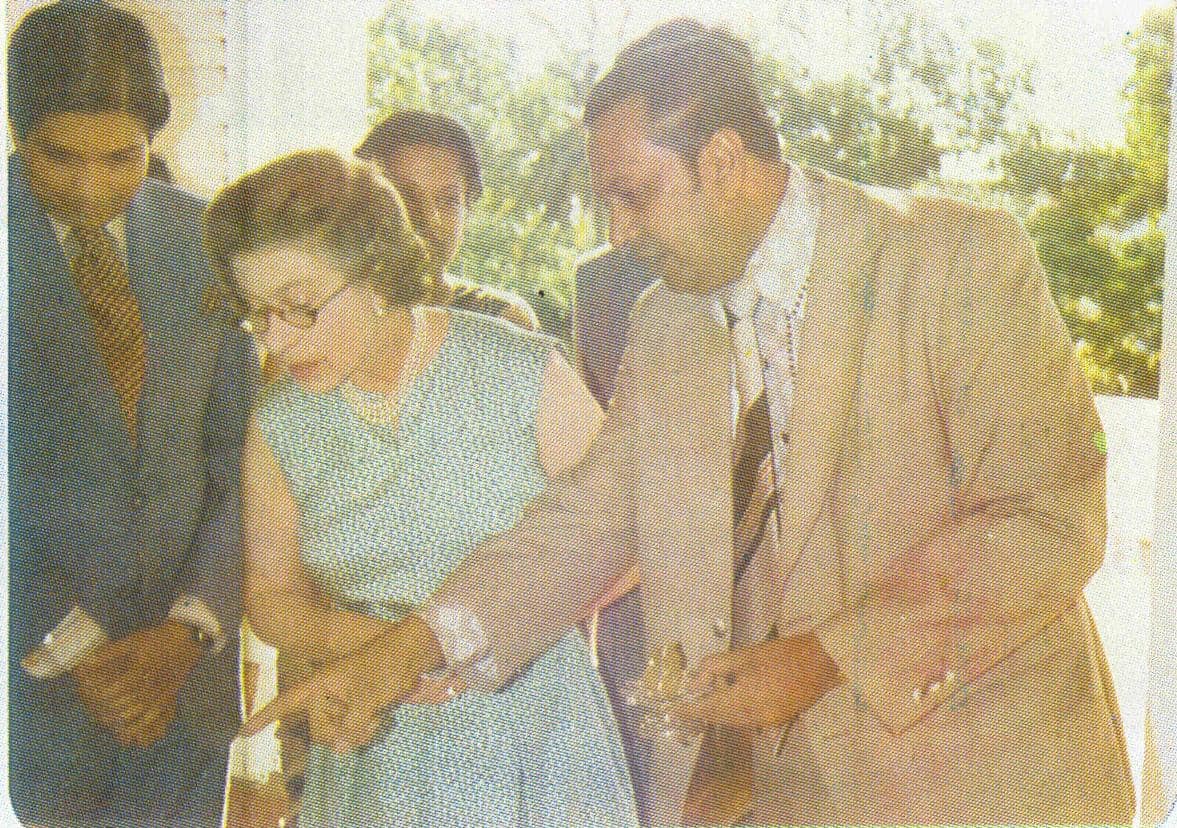 Historically Sri Lankan colored stones and pearls had been actively  sought  out by the agents of Royalty to be incorporated in jewelry since very ancient times, such as during the ancient Egyptian, Phoenician, Greek,   Roman and Byzantine Empires.  The  arrival of Phoenician,  Greek , Roman  and later Arab ships on the shores of Sri Lanka, in search of these marvels of nature,  are well authenticated.  According  to Sir Emerson Tennent,  King Solomon in Biblical times is believed to have wooed the Queen of Sheba    with precious stones sourced  in Sri Lanka. He is believed  to have sent  his sailors and emissaries to procure these precious stones from   the City of Gems (Ratnapura) in Sri Lanka,  situated in the Kalu Ganga basin,  containing  large alluvial deposits of corundum,  washed down the hills of the Adam’s Peak wilderness over millions of years;  one of the most ancient  sources of sapphires and rubies in the  world. 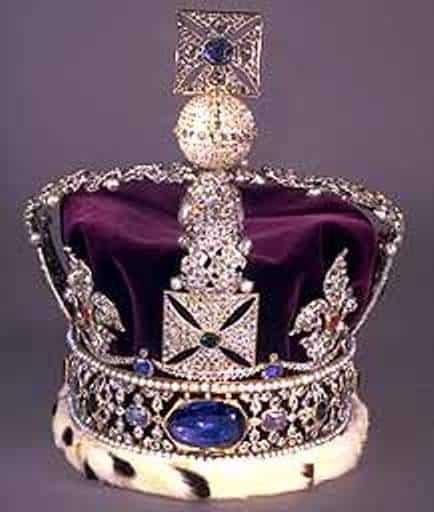 One of the oldest blue sapphires in the world,  the Saint Edward’s Sapphire,  which was first set on the coronation ring  of Edward the Confessor, when he ascended  the throne of England in 1042, is now incorporated on the Imperial  State Crown of the United Kingdom , mounted on the Maltese cross right on top of the crown.  This sapphire which is presently 969 years  old is believed to have originated  in the alluvial deposits of the Kaluganga basin in Sri Lanka.  Some of the famous blue sapphires that originated in Sri Lanka are, the Star of India (563.35 carats), Blue Giant of the Orient (486.52 carats),  Queen Marie of Rumania Sapphire (478.68 carats), Logan Sapphire (423 carats), Blue Belle of Asia (400 carats), Star of Artaban (316 carats),  Empress Maria’s Sapphire (260.37 carats), Star of Lanka (193.39 carats), J.P.Morgan Sapphire (188 carats),  Star of Bombay (182 carats), Midnight  Star Sapphire (116.75 carats), Star of Ceylon (101.01 carats)and the Bismarck Sapphire. The Blue Sapphire has been designated as the national gemstone of Sri Lanka, and the choice of an engagement  ring  incorporating as its centerpiece a Sri Lankan blue sapphire,  is considered as a rare honor bestowed on all  Sri Lankans inhabiting this beautiful island, a former British Colony in Asia. 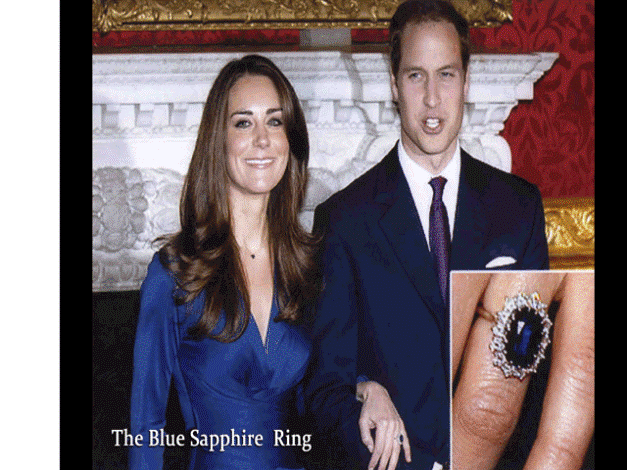 The happy couple after the announcement. Kate Middleton is displaying her engagement ring