Sotheby’s has announced the sale of the celebrated Beau Sancy diamond, presently a valued family heirloom of the Princes of the House of Hohenzollern, at its Geneva Magnificent and Noble Jewels Sale, coming up on May 14th and 15th 2012. Over 700 jewels, including jewels with an illustrious aristocratic provenance, spearheaded by the historic Beau Sancy diamond, and jewels from important private collections, including the personal jewels of Suzanne Belperron, will be on offer on both days of the auction. 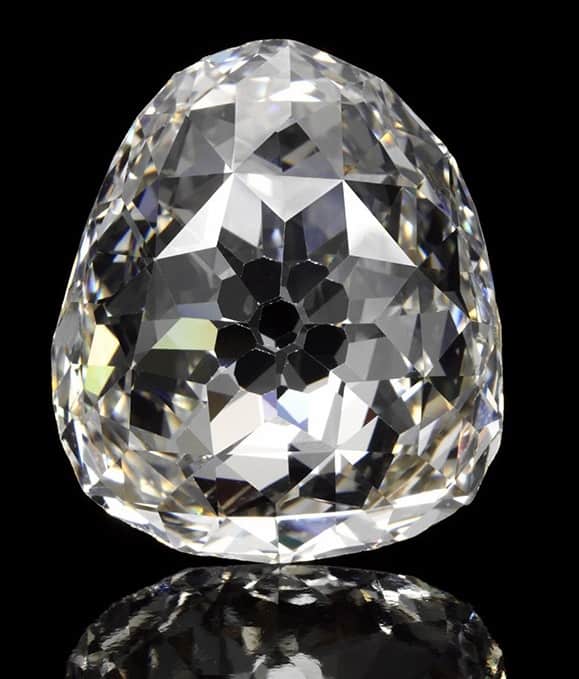 According to some authorities, like Edwin Streeter, who first published the book “Great Diamonds of the World: Their History and Romance” in 1882, the Beau Sancy Diamond has a 550-year old history dating back to the period of Charles the Bold (1467-1477), the Duke of Burgundy, who also owned the other Sancy diamond, the Great Sancy, which he used to carry into his battles, in the belief that it brings good luck.

Charles the Bold of Burgundy, the first royal owner of the Beau Sancy diamond

A significant fact about the Beau Sancy, is that Charles the Bold, who purchased the rough Indian diamond in 1475, sent it to the famous diamond cutter Louis de Berquem of Bruges – who is said to be the discoverer of the modern art of symmetrical diamond faceting – for cutting and polishing. Louis de Berquem applied the new technique of symmetrical faceting on this diamond, for which Charles the Bold paid him 3,000 ducats for a job well done.  Hence, the most striking feature of the Beau Sancy diamond is the perfect symmetry of its 110 facets,  55 facets on each side of the modified-pear, double rose-cut diamond, whose net diagram was drawn accurately by Thomas Cletscher, in the 17th-century.

After the death of Charles the Bold, the two diamonds the Sancy and Beau Sancy follow different courses in history, but are re-united again for a short period more than 100 years later, beginning from the 1580s under the ownership of Nicholas Harlay de Sancy, the Lord de Sancy, Colonel-General of the Swiss Ambassador, and Superintendent of Finance under King Henry III of France, a man of great wealth and also a collector and connoisseur of diamonds. Both diamonds, the Beau Sancy and Great Sancy get their names, from the late 16th-century owner of the two diamonds Nicholas Harlay de Sancy.

In 1589, Nicholas Harlay de Sancy pawned his diamond collection that included the two Sancys to help King Henry III raise a mercenary army during the French civil war between the Protestants (Huguenots) and the Catholics.  After Henry III’s assassination in 1589, Nicholas Harlay de Sancy, continued to support his successor Henry IV, in the same capacity.  Peace and religious harmony was finally restored to France after the signing of the Edict of Nantes by Henry IV in 1598. Nicholas Harlay de Sancy redeemed the pawned diamonds, but soon after that in 1599 he was excluded from Henry IV’s financial council due to the intrigues of  Henry’s mistress Gabrielle d’Estrees, who favored Maximilien de Bethune, duc de Sully as the new Superintendent of Finance.

Nicholas Harlay de Sancy retired from public life, and under dire financial straits, sold the Great Sancy diamond in 1604 to King James I, the successor to the childless Queen Elizabeth I, and the first Stuart King of England.  He then sold the smaller Beau Sancy diamond in the same year to Marie de Medicis, the Queen consort of King Henry IV of France. It has been suggested that the King himself paid for the diamond in order to assuage the feelings of indignation aroused in the Queen, when she learnt that Nicholas Sancy had sold his bigger diamond to the King of England. Marie de Medicis got the Beau Sancy diamond mounted on the crown which she wore for her coronation on May 13, 1610.  But, unfortunately her husband King Henry IV was assassinated the very next day, on May 14, 1610, by a Catholic fanatic, and Queen Marie de Medicis assumed the role of regent to her 9-year old son and successor to her husband, who ascended the throne as Louis XIII. Problems arose between mother and son in 1614, when Marie de Medicis refused to step down in favor of her son after he attained majority, and is eventually exiled to Blois by Louis XIII in 1617. After raising two unsuccessful rebellions against her son in 1619-20, mother and son are again reconciled through the intervention of Cardinal Richelieu, her principal adviser, who became Louis XIII’s Chief Minister.

Marie de Medicis, the Queen consort of King Henry IV of France, who purchased the Beau Sancy in 1604

In 1630, after falling out with Cardinal Richelieu, Marie de Medicis is exiled for the second time to Compiegne, from where she fled to Brussels in Spanish Netherlands (presently Belgium) in 1631, and later moved to Amsterdam in 1638, where she is given a rousing welcome by Prince Frederick Henry, the Prince of Orange, and the Stadtholder of the United Provinces of the Netherlands. While living in Amsterdam, She sold the Beau Sancy diamond to her honorable host, Prince Frederick Henry, the Prince of Orange, for 80,000 florins.

Prince Frederick Henry, the Prince of Orange, who purchased the Beau Sancy diamond for 80,000 florins from Marie de Medicis

Since then the Beau Sancy diamond became an heirloom inherited by the successive Princes of Orange, and finally came into the possession of William III who gave it as a wedding gift to his consort Mary Stuart of England, daughter of King James II of England, whose marriage was solemnized on November 4, 1677. The Glorious Revolution in 1688, resulted in the fleeing of Catholic king James II to France and the installation of Mary Stuart and William III as joint rulers of England on April 11, 1689.   William and Mary had no surviving issue, and Queen Mary II died of smallpox in 1694, leaving William III to rule alone. He continued to rule for another eight years and died of Pneumonia in 1702. After his death his sister-in-law Princess Anne ascended the throne as Queen regnant of England, Scotland and Ireland.

William III, Prince of Orange, Stadtholder of Netherlands and King of England,Scotland and Ireland, who gifted the Beau Sancy to his consort Mary Stuart, at the time of their marriage in 1677

Since William and Mary were childless, after her death there was no one to inherit the “Beau Sancy” diamond. William III knew that the diamond was a valuable family heirloom of the Princes of Orange, and therefore should be quite rightly inherited by someone closely related to the family. As such he decided to gift the diamond to his first cousin Frederick III, Elector-Prince of Brandenburg (1688-1713) and Duke of Prussia, from the House of Hohenzollern, who became the first King of Prussia, as Frederick I, from 1701 to 1713. Thus, the celebrated “Beau Sancy,” which was a treasured family heirloom of the Princes of Orange, now became a treasured possession of the Kings of Prussia, from the House of Hohenzollern, from the beginning of the 18th-century. The “Beau Sancy” became the most important stone in the crown jewels of Prussia and was set in the royal crown.

Frederick III, Elector-Prince of Brandenburg and Frederick I, King of Prussia, who was gifted the diamond by William III

The Beau Sancy, that was inherited by successive Kings of Prussia in the 18th and 19th centuries, finally came into the possession of Kaiser William II, the last Emperor of Germany and King of Prussia, who ruled from 1888 to 1918. In 1918, after Kaiser William’s abdication and voluntary exile to Netherlands, the monarchy in Germany was abolished. After the renunciation of succession rights by his elder brother, Prince Wilhelm of Prussia in 1933, and the deaths of Kaiser William in exile in 1941, and the Crown Prince William in Brandenburg in 1951, Prince Louis-Ferdinand of Prussia became the head of the House of Hohenzollern, a nominal title which he held from 1951 until his death in 1994. The Beau Sancy diamond, the valued heirloom of the Kings of Prussia, finally came into the possession of Prince Louis Ferdinand, and has now been inherited by his son and successor, Prince Georg Friedrich, the present head of the House of Hohenzollern. The diamond mounted as a pendant to a diamond necklace, remained one of the prized possessions of the Royal Prussian House of Bremen, Germany, and has now been put up for sale at the Sotheby’s Geneva auctions coming up on May 14 and 15, 2012.

Prince Georg Friedrich, current Head of the House of Hohenzollern