As predicted “the greatest white diamond ever to appear at an auction” the 118-carat, D-color, flawless, oval brilliant-cut unnamed diamond, set a world record for a single white diamond at an auction at the Sotheby’s Magnificent Jewels and Jadeite Autumn Sale held on October 7, 2013 at the Hong Kong Convention and Exhibition Center. However, the other top lot of the sale the 7.59-carat, round brilliant-cut, internally flawless, fancy vivid blue Premier Blue diamond set as the centerpiece of a platinum ring failed to reach its reserve and was withdrawn from the sale. In spite of the Premier Blue diamond’s withdrawl from the sale, the total turnover of the sale registered US$ 96 million, which is the highest total realized at any jewelry auction in Asia. 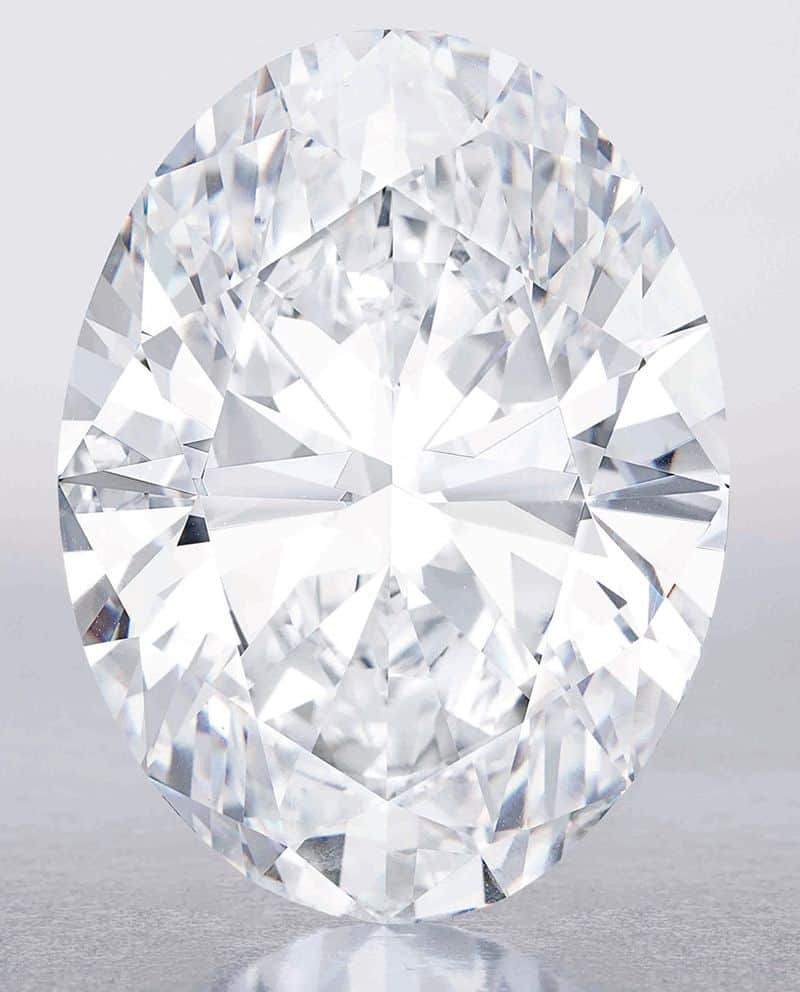 118.28-carat, D-color, flawless, oval brilliant-cut diamond that set the new world record for a white diamond at an auction

The 118-carat, D-color, Flawless, oval brilliant-cut diamond sold for HK$ 238.7 million, equivalent to US$ 30.6 million approximately. The price realized falls within the pre-sale estimate of US$ 28-35 million, and represents a world record for the price realized by a single white diamond at an auction. The previous world record for a single white diamond at an auction was set at a Christie’s auction in Geneva in May 2013, when the 101.73-carat, D-color, Flawless, pear-shaped “Winston Legacy” diamond sold for US$ 26.7 million. The 118-carat, oval brilliant-cut diamond originated from a 299-carat rough diamond discovered from an unidentified South African mine in 2011.
The buyer of the diamond is a private collector who preferred to remain anonymous. In fact, the result of the auction was a keenly fought battle between two enthusiastic telephone bidders, who vied for the unique diamond, until one bidder dropped out at the last minute.
The 7.59-carat, internally flawless, round brilliant-cut Premier Blue Diamond is the largest fancy vivid blue diamond ever graded by the Gemological Institute of America and had a reserve price of US$ 19 million. However, the maximum bid reached by the Premier Blue Diamond Ring, bearing Lot No. 1925 was only US$ 16.1 million which was much below its reserve of US$ 19 million, and was hence withdrawn from the sale.
Quek Chin Yeow, Deputy Chairman, Sotheby’s Asia, and Chairman, International Jewellery, Asia, said after the sale: “We are thrilled to achieve a new world record for a white diamond at auction when a 118.28ct D-Flawless diamond sold for of HK$238.68 million / US$30.06 million. We are also extremely happy to achieve the highest total for a sale of jewellery in Asia at HK$744,693,750 / US$95,473,557, a befitting occasion for Sotheby’s 40th anniversary in Asia.”