Year 2013 would no doubt go down as one of the most remarkable years in the history of jewelry auctions conducted by leading auction houses given the staggering and mind boggling prices achieved by some colored diamonds as well as colorless diamonds, that appeared in the auction calendar for the year 2013. 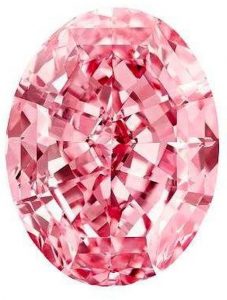 Top among this record breaking sales was the sale of the 59.6-carat, oval mixed-cut, internally flawless, fancy vivid pink diamond known as the “Pink Star” aka the “Steinmetz Pink” diamond, that sold for a staggering US$ 83 million at the Sotheby’s Magnificent Jewels Geneva sale held on November 13, 2013. This is a new world record for the most expensive single jewel ever sold at an auction, that broke Sotheby’s own record set in November 2010 at another Geneva auction, when the 24.78-carat, fancy intense pink, modified emerald-cut, VVS2 clarity, pink diamond sold for US$ 46.2 million, and subsequently came to be known as the “Graff Pink” diamond. Just a day before the record breaking sale of the “Pink Star” Diamond by Sotheby’s,  Christie’s announced on November 12, 2013, the sale of a rare 14.82-carat, pear-shaped, fancy vivid, orange diamond christened “The Orange,” the largest orange diamond in the world, for a whopping US$ 35.5 million at their Geneva Magnificent Jewels auction. The sale set two new world records, the highest price-per-carat (US$ 2.4 million) paid for any diamond sold at an auction and the highest ever price paid for an orange diamond at an auction. Another record-breaking sale registered in the year 2013, was the sale of the 34.65-carat, fancy intense pink, cushion-cut “Princie Diamond” of Golconda origin, at a Christie’s New York auction held on April 16, 2013, for a staggering US$ 39.3 million. The sale set two significant records – the highest price ever paid for a Golconda diamond at an auction and the highest price for any single jewel sold at Christie’s surpassing the auction house’s previous record of US$ 24.3 million set by the sale of the Wittelsbach diamond in December 2008.