The largest, natural, near-spherical, saltwater, nacreous pearl to appear at a public auction, and perhaps one of the largest spherical/near-spherical saltwater pearls in existence, set a world record for such a pearl at an auction selling for a staggering £811,000 equivalent to US$ 1,368,075, at a Woolley & Wallis auction held at its Salisbury Salerooms on May 1st, 2014. The auction house placed a moderate estimate of £80,000-120,000 (US$130,000-200,000) on this extremely rare natural, saltwater, near-spherical pearl, but it was widely anticipated that the pearl would fetch several times more than this estimate, approaching almost a million sterling pounds, going by the performance of such natural pearls at previous auctions, including the staggering £1.6 million fetched by a matching pair of drop-shaped pearls weighing 34.51 carats and 33.24 carats at a Woolley & Wallis auction on April 26, 2012. 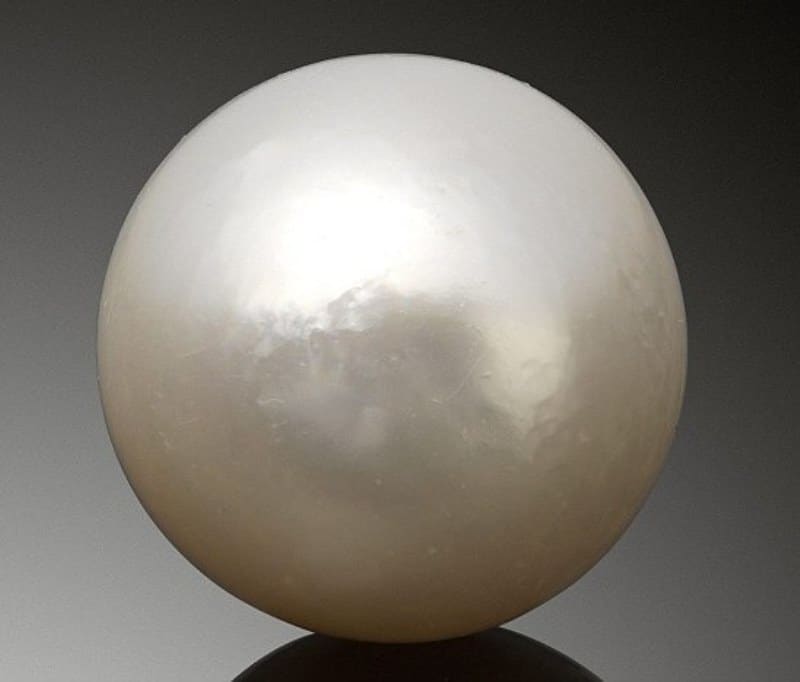 As anticipated the auction generated a lot of interest among prospective bidders including phone bidders, and soon after Woolley & Wallis chairman Paul Viney opened the bidding at £30,000 one phone bidder immediately leapt to ten times that figure. The bidding from then onwards was a battle between the phones until the hammer came down at £680,000. However, with buyer’s premium and other fees added, the overall price paid for the pearl was £811,600.
The successful bidder for the pearl was the renowned international jewellers David Morris of London’s Bond Street. Mr.Phoebe Morris of David Morris jewellers said, “The pearl is going to be made into a necklace as part of a collection of pearl jewellery we have been putting together for some time. We have a potential buyer for it in Hong Kong.”
The story of how such an enormous round natural pearl hit the auction block is as amazing as the staggering price realized by it at the auctions. The pearl was actually part of a matching pair of drop-earrings worn by a Lady, whose husband had given them to her as a gift. Apparently, the Lady had been wearing the drop-earrings occasionally, but had absolutely no idea of the enormous value of one of the pearls she was wearing. Perhaps, the pair of drop earrings were later put aside and was lying somewhere in a locker unattended and forgotten, when such enormous drop-earrings went out of fashion. Then, one fine day when the Lady of the house or her husband was clearing-up the house, the pair of drop-earrings were re-discovered, and the couple decided that it was worhtwhile showing it to a jeweller dealing in antiques, to estimate its value. As luck would have it, someone directed them to Woolley & Wallis auctioneers in Salisbury, Wiltshire, where they met the head of the jewelry department of Wooley & Wallis, Jonathan Edwards.
Edwards was kind enough to examine the two large round pearls that constituted the drop-earrings carefully, and immediately suspected that the two pearls were not identical. He had a hunch that one of the pearls was natural, but was not absolutely sure. Commenting on his find subsequently, Edwards said, “I thought there was a difference between the two because one had an outer layer of about one millimeter thick, but the other seemed to be solid. It is very difficult to tell if a pearl is cultured or natural by looking at it and you can never be 100 percent sure unless you have it X-rayed.”
Jonathan Edwards’ suspicions were confirmed when the pearls were sent to the Gem and Pearl Laboratory of London and later the Swiss Gemological Institute (SSEF) for testing and authentication. The tests confirmed that while one pearl was a cultured pearl, the other pearl was indeed a rare natural pearl. The report by The Gem and Pearl Laboratory of London, dated 21st January 2014 states that the pearl measures 16.5 – 17.4mm, weighs 33.15cts and is a natural saltwater pearl. The second report by the SSEF, dated 5th February 2014 states that the pearl weighs 33.147cts (132.59 grains), measures 16.51 x 17.44mm, and is roundish, half-drilled, the colour of the pearl is white and certifies that the pearl is a natural saltwater pearl. An appendix letter attached to the report states :-
The natural pearl described in Test Report No 72642 from the Swiss Gemmological Institute SSEF possesses extraordinary characteristics and merits a special mention and appreciation.
The described natural pearl exhibits an impressive size and weight of 33.147cts (132.59 grains), combined with an attractive roundish shape and smooth pearl lustre. The pearl shows an attractive white colour with weak rosé and green overtones, poetically also referred to as the ‘orient of pearls’. Such overtones are due to an iridescence effect caused on the surface of pearls and greatly contribute to their beauty.
Experts speculate, that given the enormous size of the pearl with a longest and shortest diameter of 16.51 mm and 17.44 mm respectively, the oyster that produced the pearl should be equally enormous to accommodate the growing pearl within its tissues. Such an oyster species which can produce such enormous pearls is Pinctada maxima, which can grow to a maximum diameter of 30 cm (12 inches). Pinctada maxima commonly known as the South Sea Pearl Oyster, occurs in nature as two possible varieties, the silver-lipped pearl oyster and the golden-lipped pearl oyster, that produces pearls with a range in size from 9 mm to 20 mm. The silvery-white color of the pearl with pink overtones is characteristic of pearls produced by the silver-lipped pearl oyster. Experts also believe, that the pearl would have grown inside the silver-lipped pearl oyster for at least ten years to reach such an enormous size.