Association between certain plant species and specific minerals in the soil have been known since medieval times, as in the case of Sweden, where plants have been used to locate sources of copper. Botanists and Geologists have also known for a long time that certain plant species have adapted themselves to grow in certain soil types and conditions, where normal plants cannot establish themselves due to extreme soil conditions such as toxicity of the soil. One such example is the Serpentine soil, rich in the mineral serpentine derived from serpentinite, a rock formed by the hydration and metamorphic transformation of ultramafic rock from the Earth’s mantle. Serpentine soils have unusually high concentrations of iron, chromium, nickel and cobalt. Serpentile soils and Serpentine barrens are widely distributed on earth. In the United States Serpentine barrens are found in the Appalachian mountains in eastern North America, the coast ranges of California, Oregon and Washington. Serpentine barrens often consist of grasslands and savannahs, where certain species of grass and other plants that have adapted to the toxic conditions in these barrens can grow. Some of the plants found in the California serpentile soils are Quercus durata (leahter oak), and Arctostaphylos viscida (whiteleaf manzanita). 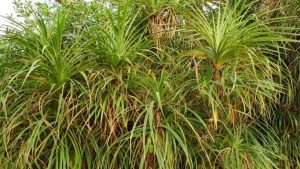 Likewise Kimberlite ores originating from Kimberlite and Lamproite pipes formed by volcanic eruptions, where diamonds are usually found, have high concentrations of potassium, sodium, magnesium and phosphorous. Obviously, there must be plant species that could thrive under high concentrations of these essential minerals for plant growth, mainly potassium, phosphorus and magnesium. Geoscientists have been looking for such plant species that would preferentially thrive in kimberlite soils, and it appears that at least in the tropical region of West-Africa a breakthrough has finally been achieved. Stephen E. Haggerty, a distinguished research professor in geosciences at Florida International University, has published a research paper in the June–July edition of the journal “Economic Geology,” in which he states that the plant, Pandanus candelabrum, has a “marked affinity for kimberlite pipes.” Stephen E. Haggerty is the chief exploration officer of Youssef Diamond Mining Company, which owns mining concessions in Liberia. According to the geoscientist, Pandanus candelabrum has successfully adapted to the kimbelite soil, which is rich in magnesium, potassium and phosphorous. The plant identified in Liberia appears to grow mainly above kimberlite pipes.

If Stephen E. Haggerty’s findings are confirmed, it could radically change the way diamonds are mined in the West-African region. Haggerty with the assistance of Botanists from the Royal Botanical Gardens in Kew, London and the Missouri Botanical Gardens in St. Louis, has identified the geographical range of Pandanus candelabrum in West-Africa, which extends up to a distance of 3,000 km from Cameroon in central West-Africa to Senegal on Africa’s far western coast. Steven Shirey, a geologist specializing in diamond research at the Carnegie Institution for Science in Washington, D.C says, “If the plant is as choosy as it seems to be, diamond hunters in West Africa will have a simple, powerful way of finding diamond-rich deposits. Prospectors are going to jump on it like crazy.” Scientists also point out that not only could the plant Pandanus candelabrum serve as a living signpost for prospectors of diamond, but also it could minimize some of the adverse environmental impact of diamond mining in West Africa. Rather than relying on indiscriminate and costly strip mining, companies could instead focus their efforts on kimberlite pipes, which are now much easier to find. The discovery could also be useful in forested areas that are difficult to explore.

Diamond explorers have traditionally looked for a variety of indicator minerals to find kimberlite pipes. Those minerals then have to be tested by labs. But, Haggerty’s discovery could help explorers to possibly track the indicator plant from the air, making diamond searching less expensive and more efficient. Scientists also believe the presence of the plant could also guide prospectors in Brazil, another heavily forested area, which sits along roughly the same latitude, on the other side of the Atlantic. If Pandanus candelabrum is not found in Brazil, geoscientists could do more research to identify other plant species that preferentially grow in kimberlite soils in this region. 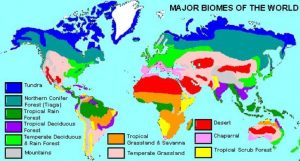 Major Biomes of the World

It is important to note that a single plant species like Pandanus candelabrum cannot be a universal indicator for all kimberlite pipes all over the world, as no plant species has a universal geographic distribution. Kimberlite pipes have been discovered in all major biomes of the world such as the Arctic Tundra (Siberia, Alaska, Canada, Greenland), Northern Coniferous Forests-Taiga (Situated just below the Arctic Tundra and stretches across North America and Eurasia), Tropical Grasslands and Savannah (Sub-Saharan Africa and Southern Africa), Shrublands (Chaparral in California, Mattoral in Chile, Mexico and Spain, Macchia in Italy, Fynbos in South Africa, Kwongan in Southwest Australia, Cedar Scrub in Texas), Tropical Rainforests (Brazil, Central Africa, Malaysia and the Indonesian Archipelago), Temperate Deciduous Forests (eastern North America, Europe, and eastern Asia) and Deserts ( Sahara, Kalahari, Arabian, Gobi, Great Victoria, Patagonian, Great Basin). 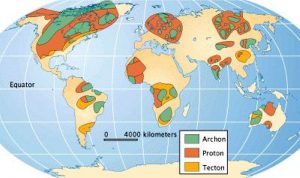 World-class kimberlite pipes have been discovered in bitter-cold regions in Siberia and Canada and diamond mines based on these pipes are presently in operation in these regions. As exploratory activities are taking place in these regions to discover more kimberlite pipes, research directed towards the discovery of new botanical indicators for kimberlite pipes in these regions, might go a long way in diamond exploratory activities. According to Stephen Haggerty, the new discovery of a plant indicator for kimberlites in the tropics might pave the way toward finding new botanical indicators for kimberlites in other regions such as the cold regions of Siberia and Canada. “Because of the depths at which kimberlites originate, it doesn’t take a rocket scientist to see that their chemistry has to be different from the surrounding rocks,” he says. “So let us take a look at the vegetation, particularly in Arctic terrains. There is flowering in the spring and during the summer.” He further said, “Kimberlites have very high potassium, sodium, magnesium, and phosphorous. Because of those nutrients, plants growing in kimberlites will be on “steroids,” whereas those on sandstone will be stunted or barren. So enhanced growth of surrounding vegetation may be a characteristic.”

Haggerty was uncomfortable with some press coverage of his paper, including headlines such as “There’s a Plant That Shows You Where Diamonds Are Buried.” He stresses that finding a kimberlite pipe does not mean you have found a profitable mine. Only 1 percent of kimberlite pipe discoveries result in economic diamond mines.