The 12.04-carat, fancy intense pink, “Martian Pink Diamond,” the second largest round brilliant-cut pink diamond in the world  after the 23.56-carat Williamson Diamond of Tanzanian origin,  given as a wedding gift to Queen Elizabeth II in 1947,  is due to hit the auction block, at Christie’s Magnificent Jewels Spring Sale, to be held in Hong Kong on May 29, 2012.  The Martian Pink Diamond, the property of an anonymous private collector, was purchased in 1976 from Harry Winston Jewelers, and becomes the largest round brilliant-cut, fancy intense pink diamond ever to appear at an auction. The diamond was cut and polished by the master-cutters of Harry Winston, a task that was completed in 1976, the very same year, the United States launched its first satellite on a mission to Mars, that successfully landed on the red planet, carrying the American flag, a landmark event in the history of space research, that prompted Harry Winston’s son, Ronald Winston, to christen the intense pink diamond, the “Martian Pink” that served the dual purpose of not only honoring the historic event, but also making a strong statement of the intense pink color of the diamond, reminiscent of the color of the red  planet in the night  skies. 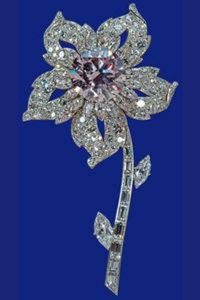 The “Martian Pink” is a rare Type IIa diamond,  constituting about 1-2% of all naturally occurring diamonds, and an exceedingly rare, plastically deformed, Type IIa pink diamond, whose occurrence is less than 0.1% of all naturally occurring diamonds. The color distribution of the stone is even, helping to accentuate the intense pink, scintillating effect of the diamond, a pure pink rose color, with no trace of color modifying secondary colors, such as purple orange or grey.

Enlarged side view of the Martian Pink diamond - copyright, Christie's

The Martian Pink Diamond against a black background - copyright, Christie's

Martian Pink diamond with the 11.85-carat D-color round-brilliant also to be sold at the same auction - copyright, Christie's

However, going by the unprecedented demand for pink diamonds, first noticed on December 1, 2009, when the 5.0-carat “Vivid Pink Diamond” set a new world record at a Christie’s auction in Hong Kong, for the highest price-per-carat for any diamond of US$ 2.1 million, followed by the world record set by the 24.78-carat Graff Pink diamond for the most expensive single jewel ever sold at an auction, when it  sold for US$ 45.6 million, at the Sotheby’s Magnificent Jewels Sale held in Geneva on November 16, 2010; a trend that seem to  continue when the 14.23-carat “Perfect Pink Diamond” sold for US$ 23.2 million, on November 29, 2010, at another Christie’s auction in Hong Kong and another 10.99-carat, fancy intense pink diamond, sold at a Sotheby’s auction in Geneva, on May 17, 2011 for US$ 10.8 million; there is no doubt that the Martian Pink Diamond would put up a strong showing at the auctions, that may even exceed the upper pre-sale estimate of US$ 12 million.