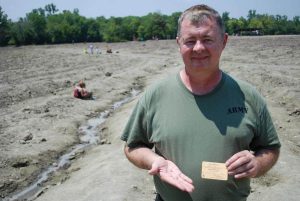 Terry Staggs standing in the search area of the park, while holding the Patriot Diamond and the Certificate issued by the park authorities

Terry Staggs of Richmond, Kentucky, a regular visitor to the Crater of Diamonds State Park, Arkansas, making at least two visits every year for the past 28 years, was finally rewarded for his patience and persevarance, when on the 4th of July, Independance Day, he discovered a stunning 2.95-carat, champagne-brown, rough diamond crystal, the largest rough diamond discovered so far this year by visitors to the park. The diamond was appropriately christened the “Patriot Diamond” a reflection of the day on which the accidental discovery was made. It is reported that Mr. Staggs had been wandering in the 37.5 acre diamond hunting area of the park for about 2 1/2 hours when he spotted something in the dirt sparkle in the sunlight. Closer investigation revealed that the tiny sparkling object was a brown-colored natural crystal, which was subsequently tested and certified by the park authorities as a brown-colored, 2.95-carat, natural diamond crystal, the largest rough diamond out of the 304 diamonds discovered so far by visitors during the year 2013. During his previous visits to the park, Mr. Staggs had been fortunate enough to discover several diamonds, but they were much smaller than his present discovery.

The diamond has not been valued by a qualified appraiser, but the most recent highly valuable diamond found at the park in February 2012, was the 2.44-carat “Silver Moon” diamond, which was valued at US$ 22,000. Mr. Stagg has no plans of selling the diamond or even having it appraised, but wants to keep it in a safety box with his other finds from the Crater of Diamonds State Park. Park Interpreter Wayman Cox said, “Mr. Staggs diamond appears to be a complete crystal and is shaped like a shield. It’s about the size of an English pea and has a golden-brown metallic appearance. The diamond looks similar in shape to the 4.21-carat yellow “Okie Dokie” diamond, which was discovered by Oklahoma State Trooper Marvin Culver at the Crater of Diamonds in 2006.”

Close-up of the 2.95-carat Patriot Diamond and the Certificate in the hands of Terry Staggs

The Crater of Diamonds State Park in Murfreesboro, Arkansas, is a 911-acre public park, the only diamond-bearing site in the world, open to the public, where visitors are permitted to dig for diamonds for a fee, and keep what they find. Since 1906, over 75,000 diamonds have been discovered at the site, which is now the Crater of Diamonds State Park, established in 1972. Among the notable diamonds discovered at the site are the 40.23-carat “Uncle Sam” diamond, the largest diamond ever discovered in the United States, discovered in 1924 by Wesley Oley Basham; the 3.03-carat white rough diamond discovered in 1990 and eventually transformed into the 1.09-carat, D-color, internally flawless, round brilliant-cut Strawn-Wagner diamond, reputedly the most perfect diamond in the world, certified by the American Gem Society (AGS) as having a perfect grade of 0/0/0, the highest grade that can be attained by a diamond, which is equivalent to ideal cut/ideal color/ideal clarity; and the 16.37-carat white diamond the “Amarillo Starlight,” discovered in 1975, the largest diamond ever found by a visitor, since the site was established as a state park in 1972.