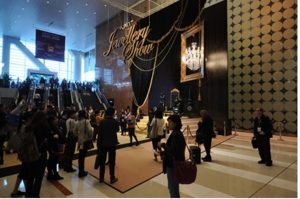 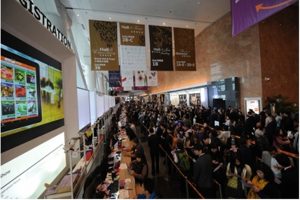 The Registration Area of the Hong Kong International Jewelry Show – 2014

Following the unprecedented success of the inaugural HKTDC’s March twin shows in 2014, the HKTDC has decided to hold the twin parallel March shows in the year 2015 too. Accordingly, all arrangements have been completed to hold the 32nd-edition of the Hong Kong International Jewelry Show from March 4-8, 2015, at the Hong Kong Convention and Exhibition Center and the 2nd-Edition of the Hong Kong International Diamond, Gem & Pearl Show from March 2-6, 2015 at the AsiaWorld-Expo. Over 4,000 exhibitors are expected to take part in the twin shows in 2015, with a corresponding increase in the total number of visitors, countries and regions also anticipated. Two new country pavilions added to the Diamond, Gem & Pearl Show will accommodate Australia and Colombia. Some of the renowned companies that will participate in this year’s twin shows are Dehres, Kuwayama, Lili Jewelry, Roberto Coin, Waskoll, A. A Rachminov Diamonds, Dimexon and Novel Collection. 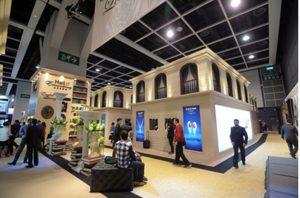 A section of the Hall of Extraordinary reserved for high-end fine jewelry, at the 2014 show

The Special Premium Zones at the Hong Kong International Jewelry Show are 1) The Antique & Vintage Jewelry Galleria, showcasing the glamour of classic jewellery from bygone times. 2) Hall of Extraordinary, an elite section exclusively for high-end fine jewellery pieces 3) Hall of Fame, bringing together top-tier international brand names in a prestigious and elegant setting 4) The World of Glamour, highlighting the expertise in jewelry manufacturing of Hong Kong-based exhibitors. Other special themed zones are Designer Galleria, Hall of Jade Jewelry and Hall of Time. Apart from these seven special themed zones, this year another special themed zone has also been added to the Jewelry Show. This zone is titled The Treasures of Craftsmanship and will showcase decorative arts, including masterpieces of carvings from gems, gold and silver, as well as precious ornaments. 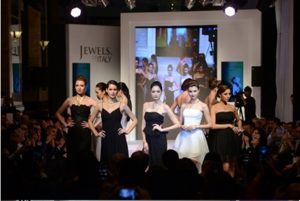 Models displaying jewelry designed in Italy at the Jewelry Show 2014

The Special Premium Zones at the Hong Kong International Diamond, Gem & Pearl Show are 1) Hall of Fine Diamonds, showcasing carat-sized loose diamonds. 2) Treasures of Nature, featuring a rich source of precious stones in many different cuts. A third special themed zone has been added to the Diamond, Gem & Pearl Show this year. This zone titled the Treasures of Ocean will feature a variety of top-notch quality pearls both cultured and natural.

A kaleidoscope of parallel fringe events will add colour to the two shows, which apart from the opening ceremony, includes cocktail receptions, gala dinners, mini-parades, series of seminars, buyer’s forums, industry experts’ presentations and two jewelry design competitions, the Hong Kong Jewelry Design Competition and the Biennial International Jewelry Design Excellence Award. The winning pieces of both competitions will be displayed during the period of the shows.