Sotheby’s Important Jewels Sale scheduled for September 24, 2013 in New York City, featuring 519 lots, will be highlighted by some important pieces of diamond jewelry. The lot that will no doubt attract a lot of attention, will be Lot 242, a highly important platinum and diamond ring , designed by Harry Winston, which is part of the estate of the George Rothman family. The size 5 1/2 platinum ring, fitted with inner sizing band and adjustable shank, signed Winston, has as its centerpiece a 19.51-carat, emerald-cut, white/colorless diamond, flanked by two triangle-shaped white/colorless diamonds, weighing 2.92 carats. A pre-sale estimate of USD 1.2 million – 1.8 million has been placed on this ring, which might be exceeded given the provenance of the ring and the great esteem in which its designer is held. 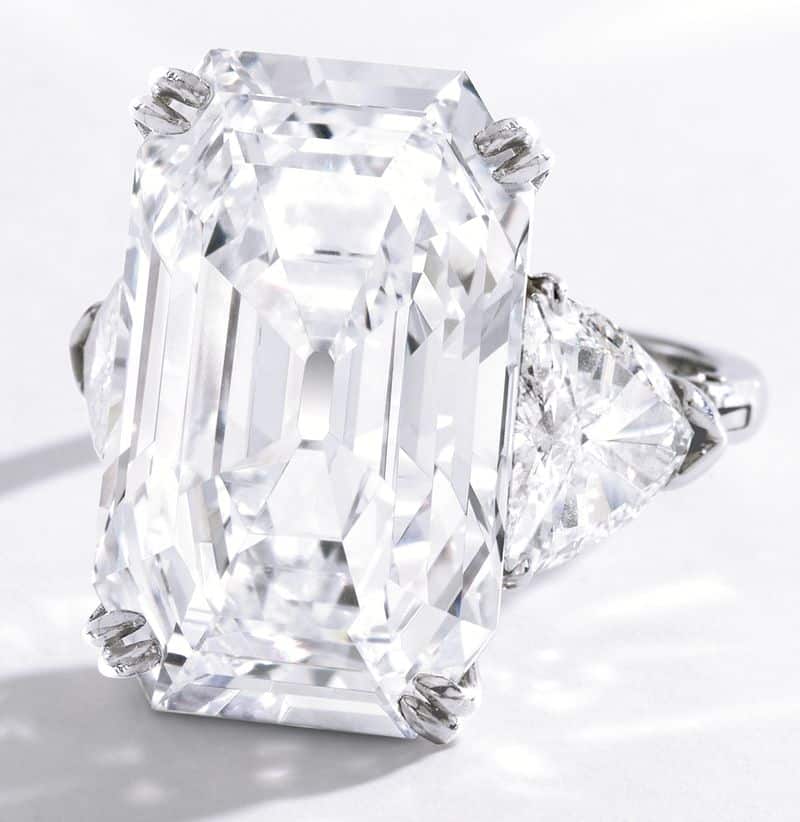 Another view of the Platinum and Diamond Ring by Harry Winston

Another significant lot with a pre-sale estimate of USD 1.25 million-1.75 million, is Lot 519, a highly important platinum and diamond ring, part of the property of an unknown New York estate. The centerpiece of this size 5 3/4 platinum ring is a pear-shaped, 15.10-carat, white/colorless diamond, flanked by two smaller pear-shaped diamonds, weighing 2.00 carats.

Another view of the Platinum and Diamond Ring with the pear-shaped, 15.10-carat, colorless diamond as centerpiece

Lot 511, a platinum, palladium and diamond triple-band, cuff-bracelet by Suzanne Belperron, designed as three tapered rows, set with 75 old mine-cut diamonds, weighing approximately 16.95 carats and an internal circumference of 5 1/2 inches, with a pre-sale estimate of USD 40,000-60,000 is another important lot at the auction. Another view of the Platinum, Palladium and Diamond Triple Band Bracelet