Harrods Department Store located on Brompton Road, Knightsbridge, London has announced the sale of a 228.31-carat, pear-shaped, near-colorless diamond belonging to an anonymous customer, who had hitherto kept the diamond in a safe deposit box of the store, a facility provided to affluent clients to store their valuables on a annual rent basis. The owner of the diamond has entrusted the Department Store to sell the diamond on his behalf and accordingly the diamond will be displayed in the store’s Fine Jewelry Room, from mid-December 2016, for inspection by would-be customers. The diamond will be sold on a first-come first-served basis if a potential buyer agreed to pay the price at which it is offered for sale. The asking price for the pear-shaped diamond will be available to potential customers on application. 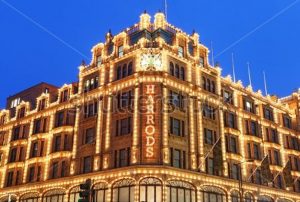 The diamond christened “The Harrods Diamond” by its anonymous owner has been tested by the Gemological Institute of America which states that the diamond is pear-shaped, G-color, VS1 clarity weighing 228.31 carats, with excellent polish and symmetry. G-color is top of the near-colorless range G to J, just below F-color, lowest of the D to F colorless range. The clarity grade of the diamond is VS1 – Very Slightly included, which means that inclusions are not visible to the naked eye, but visible only under 10x magnification. 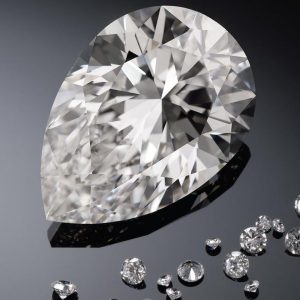 Spokesman for Harrods said that items kept by customers in their safe deposit boxes never come up for sale at the Harrods Store. Diamonds of the size and caliber of the “Harrods Diamond” are rarely sold outside auctions conducted by leading auction houses. This is the first time that a diamond kept in one of their safe deposit boxes has been put up for sale in their own store and incidentally this is also the first time the diamond has been put out on display in their Fine Jewelry Room.
Commenting on the sale of the diamond, Helen David, chief merchant of Harrods said, “It is rare that stones of this weight, cut, polish and symmetry are sold outside auction, so this is an exceptional opportunity for Harrods’ customers and a very exciting moment in Harrods’ history.”
Colorless diamonds over 100 carats in weight are quite rare, but diamonds of over 200 carats in weight are extremely rare. There are only around six famous colorless diamonds in the world, which are above 200 carats in weight. These are 1) La Luna diamond – colorless, heart-shaped, 200.07 carats. 2) Millennium Star Diamond – colorless, pear-shaped, 203.04 carats. 3)The Magnificence Diamond – colorless, emerald-cut, 243.96 carats 4) Jubilee Diamond – colorless, cushion-shaped, 245.35 carats. 5) Centenary Diamond – colorless, modified heart-shaped, 273.85 carats. 6) Cullinan II Diamond – colorless, cushion-shaped, 317.40 carats. 7) Cullinan 1 diamond – colorless, pear-shaped, 530.20 carats. Hence, it appears that the 228.31-carat, pear-shaped “Harrods Diamond” is the sixth largest colorless diamond in the world irrespective of the shape/cut, and the second largest pear-shaped colorless diamond in the world.
Some of the colorless diamonds that registered record prices at public auctions in the recent past include the the Archduke Joseph Diamond, the Winston Legacy and a 118.28-carat oval-cut unnamed diamond. The Archduke Joseph Diamond is a 76.02-carat, D-color, cushion-cut, Internally Flawless diamond that sold for US$21.5 million at Christie’s Geneva in November 2012, setting a world record for the highest price paid per carat for a colorless diamond at an auction.
The Winston Legacy Diamond is a 101.73-carat, D-color, pear-shaped, Flawless diamond that was purchased by Harry Winston Jewelers at a Christie’s auction in Geneva in May 2013 for US$26.7 million, setting a world record for the most valuable colorless diamond sold at an auction.
The unnamed 118.28-carat, oval-cut, D-color, flawless diamond which sold at Sotheby’s Hong Kong in November 2013, for US$30.6 million set the record for the highest price ever paid for a colorless diamond at an auction, pushing the Winston Legacy that set the record earlier in May 2013, to second place.